FINANCIAL ASSISTANCE. Caloocan begins distribution of supplemental aid from the national government to residents under lockdown on August 11, 2021.

Facebook Twitter Copy URL
Copied
The region's most populous cities – Quezon City and Caloocan – each aim to distribute cash aid to over 40,000 locked down families within the day

Metro Manila residents affected by a second round of the enhanced community quarantine (ECQ) in 2021 began receiving supplemental aid on Wednesday, August 11.

All 17 local government units in the National Capital Region (NCR) simultaneously kicked off the disbursement of funds to low-income families.

Government officials – including Department of Social Welfare and Development (DSWD) Secretary Rolando Bautista and Department of the Interior and Local Government (DILG) Undersecretary Jonathan Malaya – made the rounds in the metropolis, visiting cities which included Parañaque, Manila, San Juan, and Caloocan to ensure an orderly aid distribution process.

The region’s most populous cities – Quezon City and Caloocan – aimed to distribute financial assistance to 43,000 and 40,000 families within the day, respectively.

Each individual from a low-income family may receive P1,000, while a household may get a maximum of P4,000 as supplemental aid during the two-week hard lockdown, scheduled to last until August 20.

In Caloocan, the city government also reminded the public not to visit payout centers if they have not received a confirmatory text of their schedule to avoid  disorderly cash aid distribution.

In San Juan, unvaccinated “ayuda” recipients also had the option to have themselves inoculated against COVID-19 the same day, after the city government set up a satellite vaccination site in each cash aid distribution center.

Mandaluyong and Makati, meanwhile, have opted for cashless distribution of supplemental aid, after partnering with mobile payments banking service GCash.

Back during the ECQ in April, overcrowding at some cash aid payout sites in Quezon City fueled fears that financial assistance distribution in Metro Manila could become super spreader events. At that time, Mayor Joy Belmonte apologized for the overcrowding, while the DILG called it an isolated case.

This time, the threat of the highly infectious COVID-19 Delta variant – which has been confirmed to be present in all 17 localities in the region – underscores the need to make supplemental aid distribution as safe as possible.

The DILG, in a statement, said that additional personnel from the DSWD and the DILG have been deployed in distribution sites in Manila to enforce a systematic distribution process.

“[T]he DILG and the DWSD will supervise the start of the Ayuda 2 or cash aid distribution in the City of Manila to ensure the orderly conduct of payout activities in the city,” the DILG said, quoting Malaya.

The move came after President Rodrigo Duterte threatened to withhold the power of one LGU to distribute aid supposedly because its mayor was incompetent in organizing. Duterte did not name Isko Moreno in his tirades despite his very specific references to the Manila mayor.

How many will benefit from the cash aid?

The financial assistance that LGUs began disbursing on Wednesday came from the P10.89 billion worth of cash aid released by the Department of Budget and Management for locked down Metro Manila residents. 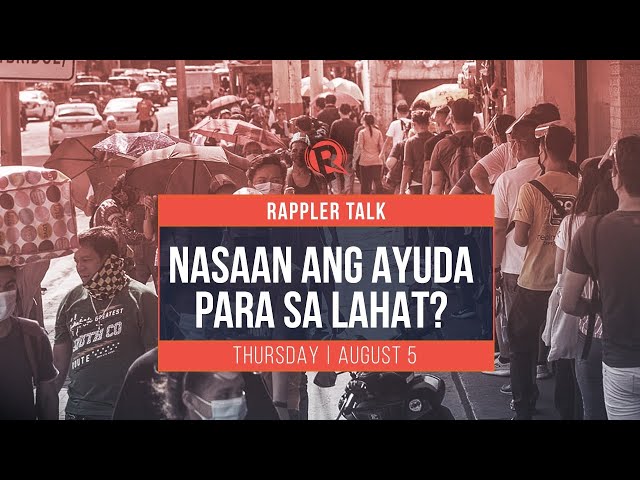