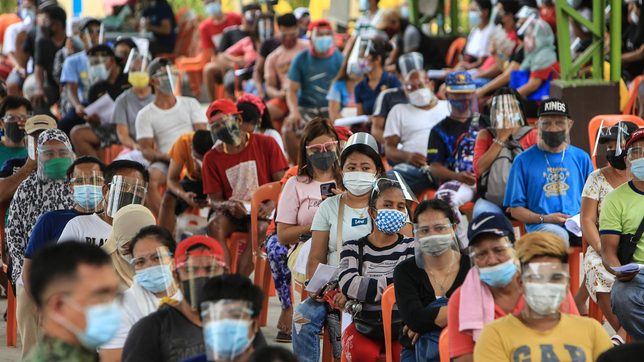 FINANCIAL AID. Indigent residents of the Baseco Compound in Manila observe health protocols as they queue for their cash assistance from the government on August 12, 2021, in the wake of the hard lockdown in Metro Manila.

Facebook Twitter Copy URL
Copied
'We deemed it best to leave the decision to the wisdom and judgment of the IATF,' says MMDA Chairman Benhur Abalos

Metro Manila mayors were unable to come up with their own recommendation to the national government on the community quarantine status of the National Capital Region after Friday, August 20.

Metropolitan Manila Development Authority Chairman Benhur Abalos said on Wednesday, August 18, that having reached no decision, they will just defer to the recommendation of the Interagency Task Force on Emerging Infectious Diseases (IATF-EID) to President Rodrigo Duterte on Thursday, August 19.

“We deemed it best to leave the decision to the wisdom and judgment of the IATF,” he added.

Metro Manila, which is on lockdown until August 20, has been grappling with over 30,000 active COVID-19 cases – the highest in the country – amid the presence of the highly infectious Delta variant.

During a virtual presser, Abalos said their options were to support an ECQ extension or shift to a “strict” modified ECQ (MECQ) but they could not decide as the data presented to them during their meeting was not enough.

Abalos specified that mayors still had questions about whether the projections that health experts presented to them during the meeting took into account the intensified vaccinations of all local government units during the ECQ period that began on August 6.

“Pinakitaan kami ng different combinations of MECQ, ECQ. Pero parang may kulang na factor doon sa isang pinakita sa amin (We were presented with various combinations – ECQ, MECQ. But there seemed to be a missing factor in what was shown to us) particularly with the ECQ, with the current jabs. Was it on the basis of jabs we’re doing right now or on the basis of vaccinations we’ve done last month?” he added.

The MMC also raised concerns about the potential lack of financial aid to poor families should ECQ be extended again.

(Without financial aid, it would be really difficult for us because we have to lock down people. How will they feed themselves?)

Metro Manila mayors, however, said they are committed to continuing the beefed up vaccination efforts regardless of the IATF’s recommendation to Duterte.

“Whatever the decision of the IATF will be, the mayors committed to continue doubling up their vaccination efforts. Stricter implementation of health protocols and comprehensive testing and contact tracing will also be continuously imposed,” he said.

Before the start of ECQ, the mayors set an ambitious goal to inoculate 250,000 COVID-19 jabs daily during the lockdown period, in a bid to raise vaccination coverage to 45%, just 5% short of the so-called “population protection” target by the national government. 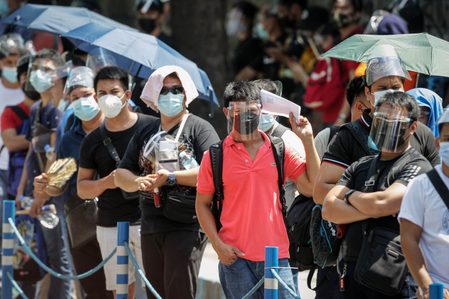 The capital region, however, was unable to meet that target. Its single-day record was set on August 12, when 214,000 COVID-19 jabs were administered in Metro Manila. – Rappler.com