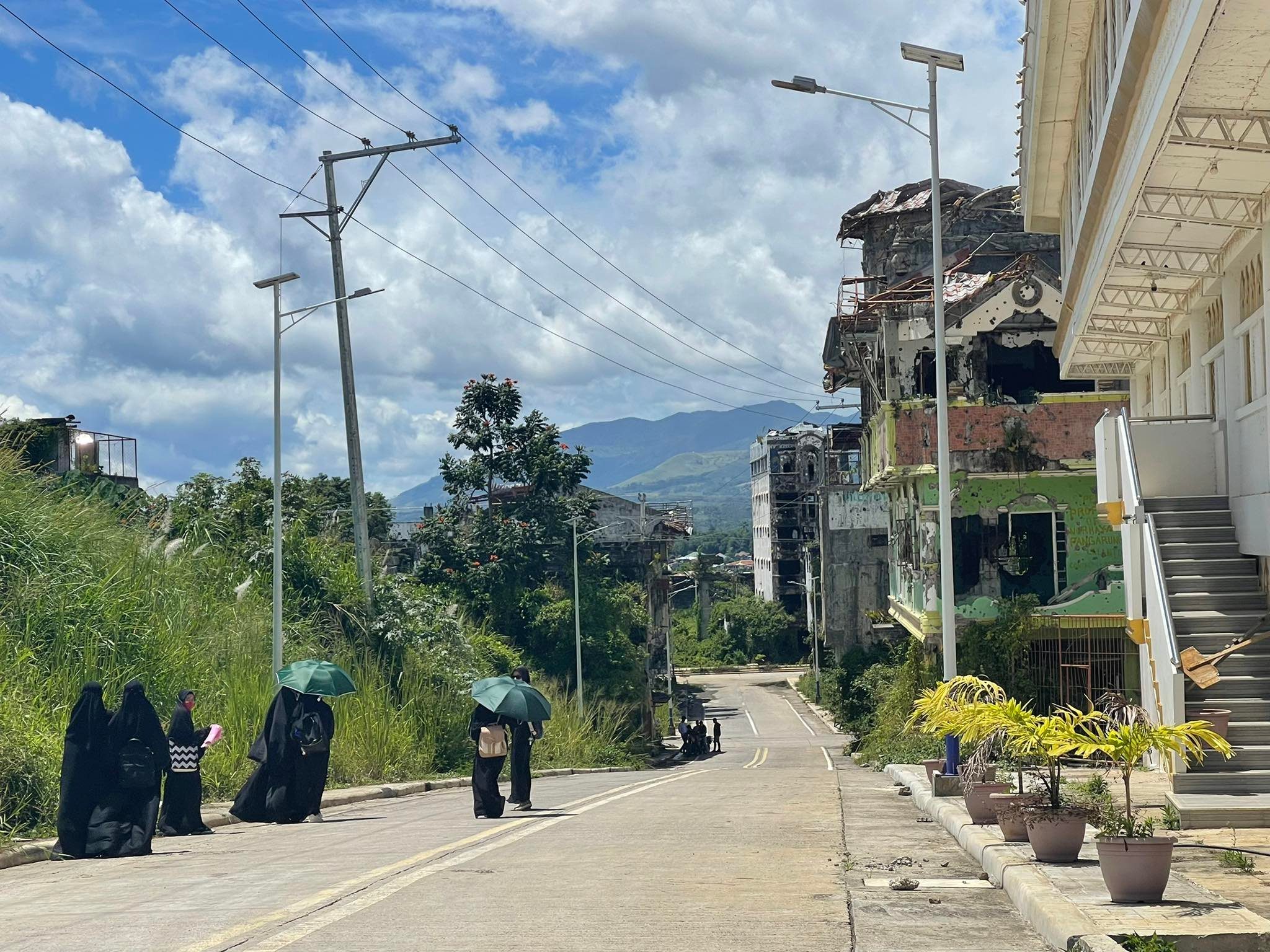 NEW AND OLD. A group of Maranao women walk past a row of newly built and destroyed building on a a road in Marawi City on Monday, October 17.

Facebook Twitter Copy URL
Copied
Moro Consensus Group chairman Drieza Lininding says: 'The task force's basis for accomplishments is its list of projects. But the bottom line should be whether or not people have returned to rebuild. Most of them have not.'

LANAO DEL SUR, Philippines – Officials on Monday, October 17, offered flowers and prayers at the foot of a memorial for soldiers and policemen who were killed during the five-month siege in the predominantly Muslim city of Marawi in 2017.

The memorial, built in honor of the more than 160 soldiers and policemen who lost their lives, can be found in Camp Ranao, the seat of the Army’s 103rd Infantry Brigade.

Marawi marked the fifth year of then-president Rodrigo Duterte’s declaration of the city’s liberation from the Daesh-inspired Maute Group that sought to establish a caliphate in the area.

Drieza Lininding, the leader of the Marawi-based civil society organization Moro Consensus Group, said his group was with the officials in remembering the courage of the soldiers and policemen who died fighting the extremist group.

“But there were also many innocent people who died in Marawi who have remained unaccounted for. A lot of them died and were buried without being identified,” Lininding told Rappler. 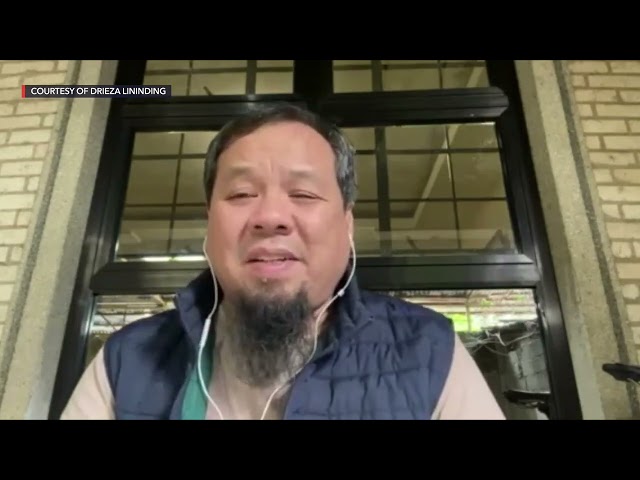 Brigadier General Arturo Rojas, acting commander of the military’s Western Command, said there were 30 confirmed members of the Maute Group who were still being sought by the government.

“The remnants of this group have no more capability to get support,” he said.

Lininding, however, said there were other pressing problems that Maranaos hoped the government would address, such as the start of the long process of compensating residents who lost their loved ones and homes during the five months of fighting in Marawi.

Lininding and Marawi Mayor Majul Gandamra appealed to President Ferdinand Marcos Jr. again to appoint members of the nine-seat Marawi Compensation Board without which the reparations cannot take place, based on the law.

They said thousands of Maranao families displaced by the Marawi Siege would not be able to rebuild unless the government released the reparation funds.

“How can they get compensated unless the Marawi Compensation Board gets activated, and starts its work? We appeal to President Marcos to prioritize this,” Lininding said.

He said there were still thousands of families living in temporary shelters on the outskirts of Marawi who had been waiting for five years to return and rebuild.

“Others are living elsewhere. When we talk of temporary shelters, we know it means poor living conditions,” he said.

Lininding said the affected families have grown tired of waiting for the government.

“Every year, when we remember what happened in Marawi, we repeat the same message. Nothing has changed since last year. People have not yet returned,” he said.

Mayor Gandamra complained about the failure of the government to provide electricity and potable water in the Marawi villages on the list of “most affected areas.”

But where are the people?

Daryll Bryan Villanueva, the assistant secretary for regional operations of the Department of Human Settlements and Urban Development (DHSUD), gave assurances that the government’s rehabilitation program for Marawi “will stay the course under the administration of President Ferdinand Marcos Jr.”

Villanueva said several rehabilitation projects had been completed, and many more were ongoing and in the pipeline “to restore Marawi’s economic vibrancy and overall development.”

The fifth anniversary of the Marawi liberation was highlighted by the inauguration of a barangay complex, which includes a health center and a Madrasah (school), in Barangay Tuca Marinaut.

It was the 15th out of 24 such facilities to be inaugurated in Marawi’s most affected area by the city government in five years.

Officials also opened a Torogan (royal house) in Barangay Sagonsongan that would serve as a meeting place and house the offices of Marawi’s traditional leaders.

The National Housing Authority (NHA) will also award on Tuesday, October 18, houses to 157 families in the village of Gadongan.

These will bring to 1,110 the number of houses the NHA awarded to families left homeless as a result of the Marawi Siege.

Task Force Bangon Marawi (TFBM) said it had constructed nearly 28 kilometers of roads and bridges damaged and destroyed in 2017, more than a dozen barangay complexes, and several other structures, such as the Marawi Museum, School of Living Traditions, and the Marawi Convention Center.

Lininding, however, said the government had missed the point of rehabilitation.

“We are not on the same page. The task force’s basis for accomplishments is its list of government projects. But the bottom line should be whether or not people have returned to rebuild. Most of them have not,” Lininding said. – with reports from Herbie Gomez/Rappler.com