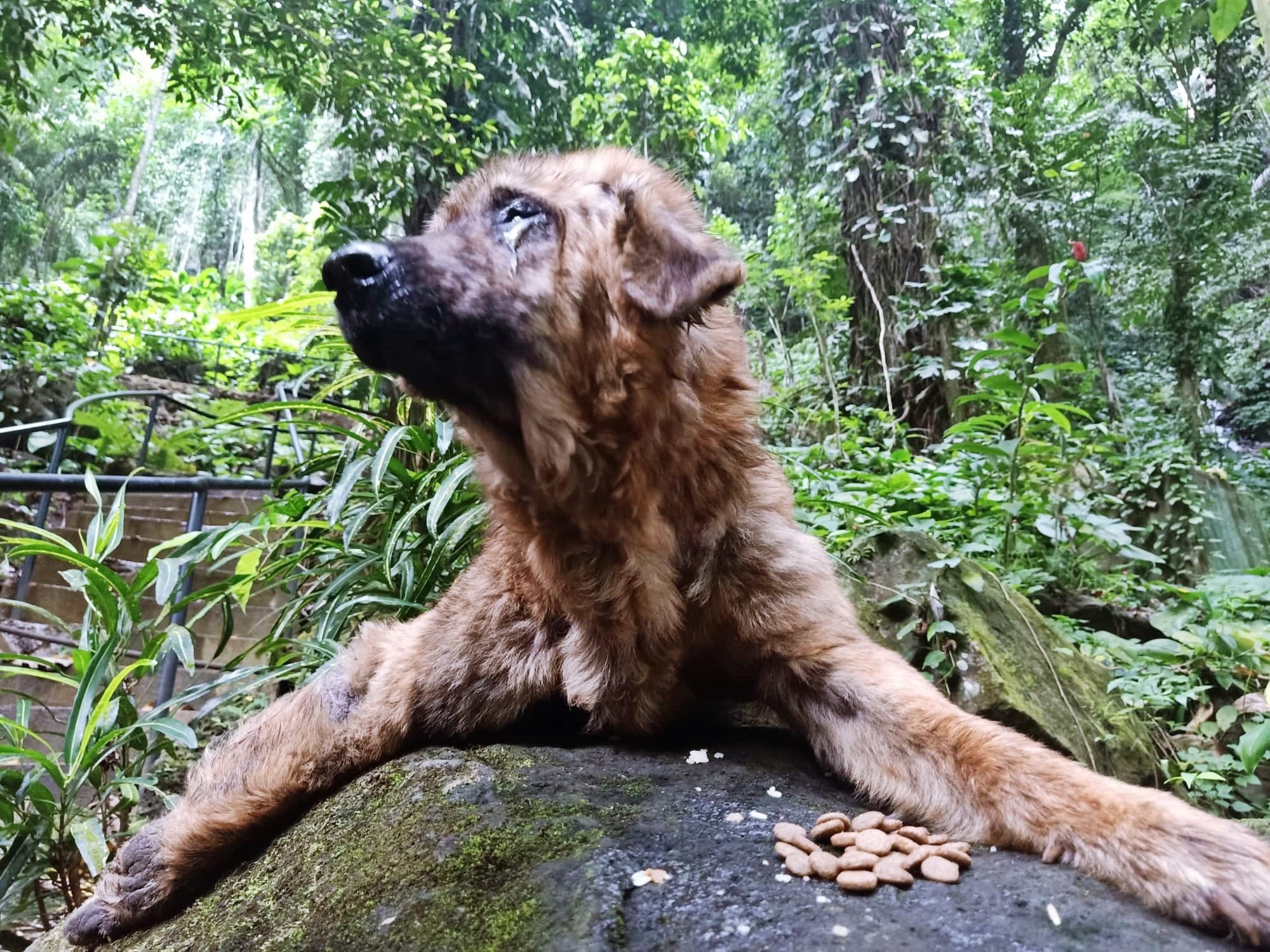 IN BAD SHAPE. Stray dog "Tino" is given dog food by members of the animal welfare advocacy group Iligan Stray Feeders before the animal is taken for care.

Facebook Twitter Copy URL
Copied
The Iligan Stray Feeders and Rotaract Club of Iligan Bay and Councilor Marlene Young are raising awareness about the plight of stray dogs, urging residents to adopt and take care of the animals instead of buying from commercial breeders and pet shops

ILIGAN CITY, Philippines – Animal welfare advocates in Iligan have found an ally in a councilor in moving to prevent more stray dogs from getting euthanized in the city pound.

Their long-term goal is to build the Iligan City Animal Care and Rehabilitation Center to take care of stray dogs while the animals await adoption.

The animal welfare advocates from the group Iligan Stray Feeders and Rotaract Club of Iligan Bay have launched the “Adopt, Don’t Shop” campaign together with Councilor Marlene Young.

Their campaign aims at raising public awareness about the plight of stray dogs and urging residents to adopt and take care of the animals instead of buying from commercial breeders and pet shops.

On Thursday, September 22, members of the Iligan Stray Feeders rescued a stray dog near Tinago Falls, fed the hungry animal, and then took it to a veterinary clinic for treatment.

They called their new pet “Tino,” in reference to the Tinago area where they found the ailing animal on a boulder.

The group said the dog tested negative for distemper, but veterinarians found it to be anemic.

In Iligan, more than 40 unclaimed dogs get euthanized at the city pound monthly.

No law prohibits dog euthanasia in the country, and at the city pound, the sickly, especially the rabid ones, are put to sleep first.

Young said she understood the need to strike a balance in their campaign, given that deaths due to dog bites have become a problem in Iligan.

“Many people have died here due to rabies,” she said.

Young said stray animals and all the concerns that come with them were “a growing problem just like in other cities, but it rarely gets the attention it deserves.”

She said they launched the campaign so the problem would become part of the public discussion and consciousness in Iligan in hopes of arriving at solutions.

The animal welfare advocates said the city currently lacks a facility where the animals can really be taken care of, and where adoption, rather than euthanasia, would be given a push.

“We are hopeful that our city will soon have the capability to have rescued animals put up for adoption or trained to help in community service,” Young said.

The groups scaled up the campaign in September in time for the Diyandi Festival activities leading up to the September 29 feast of Michael the Archangel, the predominantly Catholic city’s patron saint.

Young, her son John Russel, and the other animal welfare advocates paraded their pet dogs during Iligan’s first-ever Petwalk “fashion show” from the Children’s Park to the City Public Plaza on September 10.

They pushed the message: instead of buying, just adopt dogs, and be responsible pet owners.

They dressed up their pets in colorful costumes, offered free animal grooming, check-ups, and consultations, and gave out pet shampoo and dog food to pet owners.

He said the activity was an effective way of telling Iliganons to take care of their pets “because they will give us joy and become our best friend.”

Young said: “There are a lot of people in Iligan who want to help, but they don’t know how. Now they know there are groups like the Iligan Stray Feeders.”

The group, she said, is accepting donations, such as dog and cat food, and vitamins.

Young said the group also needs help for its spay and neuter initiatives, which are a bit costly. – Rappler.com