POSTPONED. Stakeholders gather in a small restaurant for a public hearing on the controversial project of Xavier University-Ateneo de Cagayan on Friday, October 7. The Environmental Management Bureau cut short the meeting and moved it to October 17 after participants complained of the size of the venue.

Facebook Twitter Copy URL
Copied
The Environmental Management Bureau moves the public hearing to a later date, after stakeholders complained of the small venue as well as not being given enough time to study the project's environment impact assessment

CAGAYAN DE ORO, Philippines – The Environmental Management Bureau (EMB) on Friday, October 7, postponed a public hearing about a controversial project of the Jesuit-owned Xavier University-Ateneo de Cagayan and property developer Cebu Landmasters Incorporated (CLI) after people who came to be heard complained about the size of the venue.

The group Concerned Parents, Teachers, Alumni, and Communities against the Sale of the Xavier Campus (Coptac) questioned the choice of a restaurant in the upper part of the village of Carmen as a venue, saying the establishment can only accommodate at least 50 people.

“I agree with the observation that the restaurant cannot be a venue for a public hearing because of its limited capacity,” Lao said.

CLI representatives apologized for the venue, saying it did not anticipate that many people would show up for the public hearing.

The group also complained that the project proponents did not give them enough time to study the project’s Environment Impact Assessment (EIS).

Lao agreed and directed CLI to provide stakeholders with copies of the document.

Those opposed to the project feared that the project would substantially alter, if not destroy the main university campus which they considered an important part of the city’s history and heritage.

They also said the project would have serious repercussions on the environment in uptown Cagayan de Oro where Xavier-Ateneo planned to build its “campus of the future” in an envisaged mixed-use township. 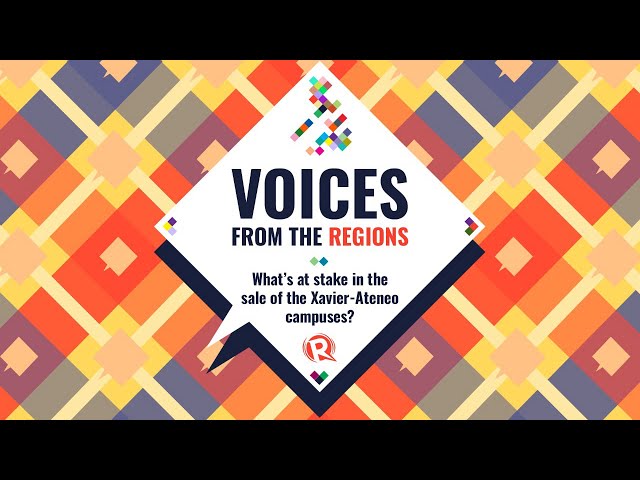 The details of the agreement between Xavier-Ateneo and CLI have remained unclear, but earlier reports said that substantial portions of the university’s properties, including more than half of its historic main campus, were to be sold.

CLI was supposed to present the EIS during a public hearing which is required before it can secure an Environmental Clearance Certificate (ECC) from the environment department, and proceed with the project.

Cagayan de Oro Councilor Roger Abaday, chairman of the City Council’s committee on environment, said the local legislature has already approved the application of CLI “subject to the issuance of an ECC.”

Dr. Anselmo Mercado, Coptac president, questioned the move of the City Council to approve the project before a public hearing, saying it was like putting the cart before the horse, and called the project “lutong Macao” (done deal).

During Rappler’s Voices from the Regions interview, Mercado and other Coptac members also called for transparency and pointed out that important details of the agreement between Xavier-Ateneo and CLI were kept from the public.

Coptac vice president for external affairs Ro-Ann Bacal told Rappler there has never been a serious public hearing about the project.

On its website, CLI said it was collaborating with Xavier-Ateneo to turn 14.3 hectares of the institution’s Manresa property into a mixed-use “university town to pair with the Xavier University Masterson Campus of the Future.”

The township, it said, is envisaged to be complete with retail stores, offices, plenty of open and green spaces, and wide roads that would complement Xavier-Ateneo’s “campus of the future” within 28 hectares of protected forest area.

CLI said the project would create an academically stronger university and transform uptown Cagayan de Oro as a key catalyst for the economy of Northern Mindanao. – Rappler.com