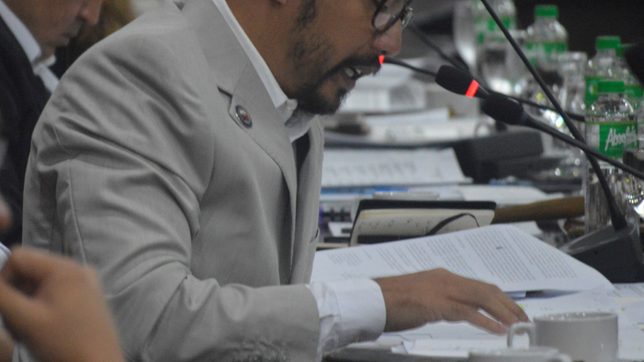 The arrest warrant stemmed from the case filed by Albert Ceriales, who accused Seth, Allan, and several John Does of kidnapping his wife Milagros, and mother Rosita, and detaining them against their will at the Jalosjoses’ Dakak Park and Beach Resort in Dapitan City in 2019.

Allan is the son of Rosita from her second husband.

Seth Jalosjos’ lawyers filed an urgent motion to quash information and to defer the arrest warrant the same day it was issued on Wednesday, July 29.

A day after the court issued the arrest warrant, Rosita and her 3 children  – Elisa Ceriales-Vidad, Annabel Ceriales-Saile, and Tita Ceriales-Lectura – met with local journalists and tearfully pleaded with Albert to withdraw his complaint, saying there was no kidnapping and that they were just victims of the province’s dirty politics.

Albert and Milagros’ son, Milbert, also begged his parents to “stop their stupidity.”

On March 18, 2019, Albert filed a kidnapping complaint against Seth and Allan, but the prosecutor dismissed it on July 15, 2019. At that time, Rosita, Milagros, and all their family members executed affidavits denying the kidnapping and illegal detention allegation.

Albert then filed a petition for habeas corpus alleging that his wife and mother were illegally detained in Dakak. RTC Branch 8 Judge Ric Bastasa dismissed the petition on August 14, 2019, saying unlawful “detention was not evident.”

However, late in August, Milagros recanted her earlier affidavit and alleged that she and Rosita were kidnapped and detained against their will inside Dakak.

Albert filed a motion for reconsideration on September 6, 2019, after which the prosecutor’s resolution dismissing case against Seth and Allan was resurrected.

On January 2, information was filed before RTC Branch 9. Seth and Allan, meanwhile, questioned the reversal of their case resolution before Department of Justice and the Dipolog City Prosecutor’s Office.

While the DOJ review was ongoing, the RTC Branch 9 presiding judge inhibited himself from the case, which was raffled to RTC Branch 6. – Rappler.com