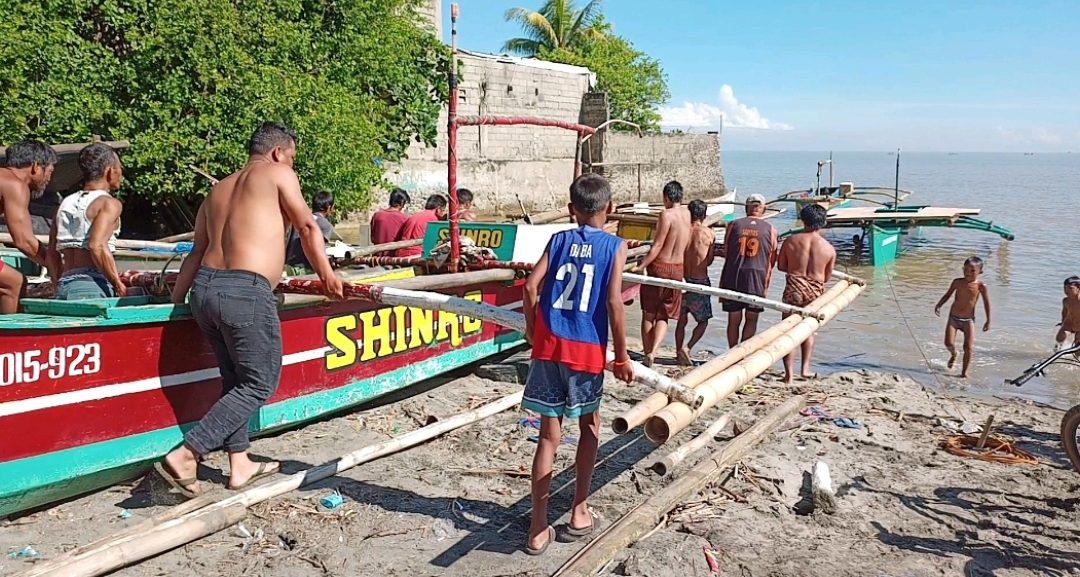 SEA-BOUND. Fishermen prepare to carry a boat to the water for another fishing trip in the coastal village of Bonbon in Cagayan de Oro City on Saturday, August 27.

Facebook Twitter Copy URL
Copied
'The fiesta is over and after last week's big catch, what now?" asks Bonbon sardine fisherman Kardo del Puerto while contemplating his and his family's future

CAGAYAN DE ORO CITY, Philippines – Fishermen in a coastal village in Cagayan de Oro are facing this reality: there is a crisis in their fishing catch and their luck is running out again.

Since August 23, when a group of fishermen in search of tamban (sardines) went home with approximately 4,000 kilograms of small fishes called dulong or hipon from the Macajalar Bay, none of them were able to repeat the feat.

Like the lowly tamban, the schools of dulong, which they stumbled on in the waters off Tagoloan town in Misamis Oriental after a two-night search, vanished from their radar.

But Cagayan de Oro’s just-concluded fiesta was another saving grace for some of the fishing families in crisis – city hall came to their aid by renting boats for the fluvial parade on Cagayan River on Sunday, August 28, the day of the citywide celebration of the feast of Saint Augustine, the city’s patron saint.

Del Puerto’s boat was one of boats from the coastal villages of Bonbon, Bayabas, and Macabalan that were rented by the local government for P2,500 to P5,000 each that day.

“Today, the fiesta is over and after last week’s big catch, what now?” asked Del Puerto while contemplating his and his family’s future.

Until mid-2021, Del Puerto said Macajalar Bay was an abundant source of sardines.

Tamban proved to be scarce and a difficult fish to catch in the bay during the past eight months of 2022, he said.

The tamban crisis has become so pronounced that the Bureau of Fisheries and Aquatic Resources (BFAR) had come to their rescue, giving each of the fishing families P5,000 in cash plus a half sack of rice.

Del Puerto said the BFAR aid has yet to be repeated this year.

He and the other fishers said all they have now is hope that there would be another influx of dulong by September when they expect a less brighter moon to offset their tamban fishing losses.

The bright moon tends to scare the hipon or dulong away.

The fishers have also called on authorities to ramp up their campaign to stop mining activities upstream, in Cagayan de Oro’s uplands, that kill the hipon that find their way into Macajalar Bay.

“Their chemicals, specially mercury and cyanide, are the killers of the anga and iswel (varieties of the small fishes) found in the rivers,” said fisherman Esteban Oguimas.

The varieties, he explained, are not the small delinquent fishes that grow.

Caminero said the fishers first saw the crisis in 2021, and it worsened this year.

“This is a serious problem not only for them (fishers) but for all of us, the consumers,” Caminero said.

Lokoy Nagac, a 53-year-old Bonbon fisherman, said he woke up on Saturday with a sad face as he gazed at the sky and the waters of Macajalar Bay from his home.

Nagac said the future for his and other fishing families in Bonbon looked bleak, pointing out that even the weather has become unfriendly to them.

“How can we go out fishing when weather conditions don’t allow us to fish?” asked Nagac, pointing at the dark clouds that hovered over Macajalar Bay from a distance. – Rappler.com