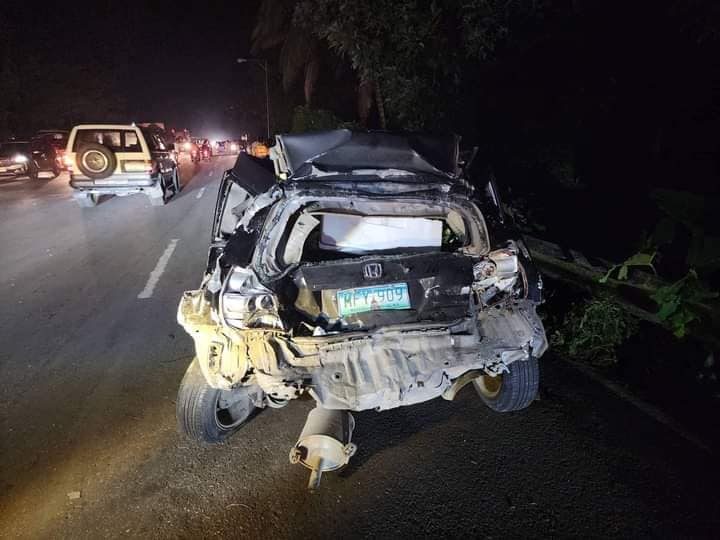 WRECK. One of the vehicles involved in a smash-up of several vehicleson a highway in South Cotabato on Friday night, September 23.

Facebook Twitter Copy URL
Copied
(1st UPDATE) Investigators say a 10-wheel truck lost its brakes, crashed into a car, and then rammed through a row of vehicles along a crowded section of a highway, near a school

GENERAL SANTOS CITY, Philippines – A man and his child died while 14 others were hurt in a smash-up of more than a dozen vehicles on a highway in Tupi town, South Cotabato, on Friday night, September 23.

The father and son were on a motorcycle along with Hasnia Makasaehe, a relative who sustained injuries when the vehicles figured in the highway smash-up.

Investigators said a 10-wheel truck lost its brakes, crashed into a car, and then rammed through a row of vehicles along the highway, near the South East Asian Institute of Technology (SEAIT).

The incident happened amid a drizzle and as commuters, including SEAIT students, were crowding along the highway, and waiting for a ride home.

The wayward truck rammed from behind vehicles that slowed down because it was a crowded area.

The accident involved two trucks, three sports utility vehicles, five motorcycles, a public bus, three pick-up trucks, and a tricycle, according to the Tupi Fire Station which sent a team to help victims which included pedestrians.

A video circulating on social media showed strewn bodies on the highway. – Rappler.com