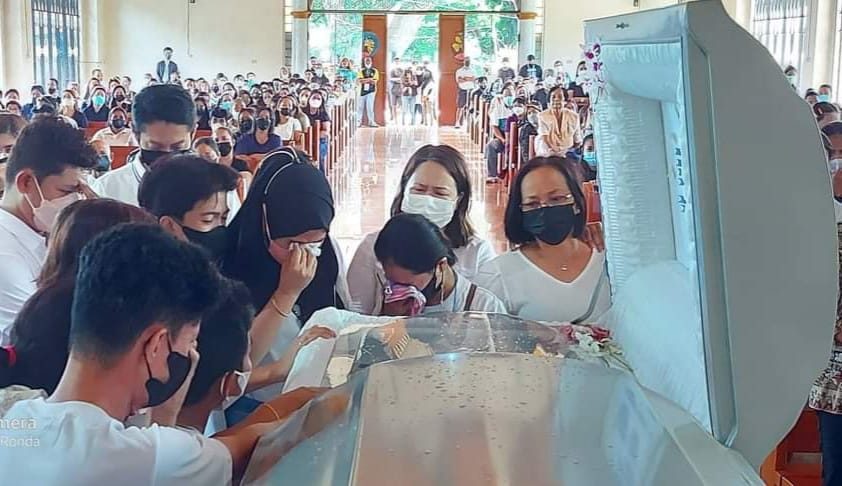 TEARS FOR VICTOR. Relatives and friends of Victor Capistrano, the executive assistant of the late former Lamitan mayor Rosita Furigay break into tears during his funeral on Tuesday, August 2.

BASILAN, Philippines – Hundreds gathered for the funeral of Victor Capistrano, the executive assistant of former Lamitan mayor Rosita Furigay, on Tuesday, August 2, more than a week after the two were killed in a gun attack at the Ateneo de Manila University in Quezon City.

The 48-year-old Victor Capistrano was laid to rest at Colony Cemetery around noontime following funeral rites at the Saint Peter parish church in Lamitan, a day ahead of Furigay’s interment.

Like Furigay, Capistrano was well-loved by many Lamiteños whom he had served since 2013 when his politician-friend was first elected mayor of the city.

His relatives, friends, and even acquaintances paid tribute to him, describing him as a “kind, helpful, generous, friendly, and jolly person.”

Outside the church, Muslims gathered to show their grief over Capistrano’s killing.

Unmarried and with no children, Capistrano had served as a breadwinner for some of his siblings, nephews, and nieces, some of whom he had sent to school.

Capistrano was also a prominent advocate of marginalized sectors’ rights and causes in Basilan and was president of one LGBTQ+ organization in Lamitan.

His colleagues in the LGBTQ+ in Lamitan said Capistrano was a “great loss” to them and their causes.

The group’s vice president, Carmelito dela Cruz, said Capistrano helped many of LGBTQ+ members cope with the crisis during the first two years of the COVID-19 pandemic, and other difficulties.

“We hope that justice will be served not only for the Capistranos but for the Furigays and the Ateneo security guard as well,” Dela Cruz said, referring Jeneven Bandiala, the third person killed in the Ateneo shooting.

Capistrano had known and had been a close friend of Furigay even before she became mayor, and had helped in managing one of her businesses.

He was treated like a family member that he had been a constant companion of the ex-mayor even during important family events like the July 24 graduation day of Furigay’s daughter Hannah Rose at the Ateneo.

Capistrano saw the Furigay children grow up and were present during all their graduations since pre-school, Kelsey, Rose Furigay’s daughter, said in an earlier interview with Rappler.

Hannah Rose survived the violent gun attack at the Ateneo.

Dr. Yumol’s father, Rolando, was killed by still unidentified gunmen outside his house on Rizal Avenue, Barangay Maganda in Lamitan on Friday morning, July 29. The police investigation is ongoing. – Rappler.com