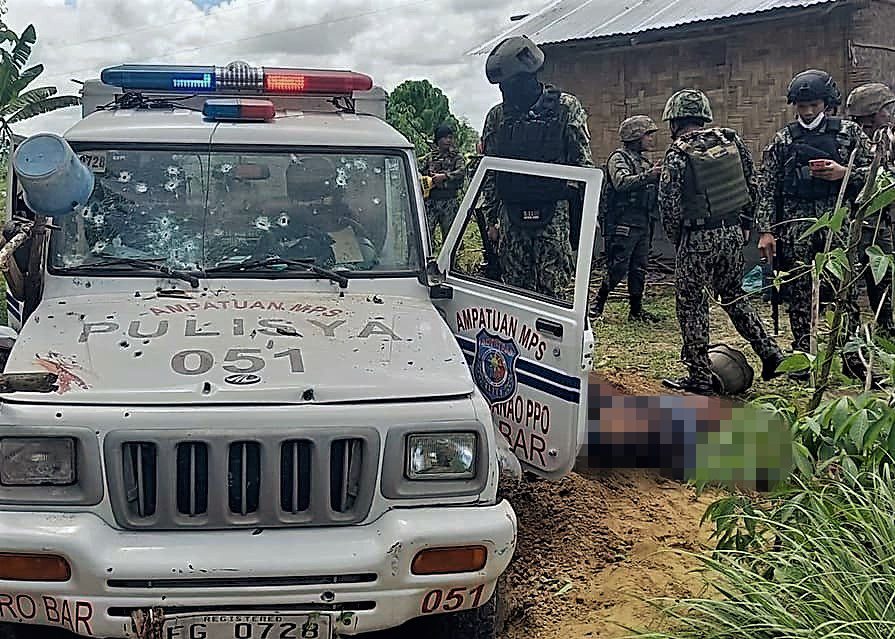 GENERAL SANTOS CITY, Philippines – The Philippine National Police (PNP) replaced the Maguindanao police chief, hours after an ambush that saw a town police chief and his aide killed and three others wounded in the province on Tuesday, August 30.

Panapan was replaced hours after Ampatuan town police chief Lieutenant Reynaldo Samson was killed along with his aide Corporal Salipudin Endab in an attack carried out by a local armed group in the same town where the infamous Maguindanao Massacre took place in 2009.

Police said Samson and his men went to the village of Kapinpilan in Ampatuan town to arrest a man named Kamir Kambal in relation to a robbery case.

Failing to find Kambal, Samson and his team headed back to the town police station but were met with a hail of bullets along the way.

Investigators said the beleaguered police team managed to return fire, and the assailants scampered as soon as police reinforcements arrived.

The police in the Bangsamoro Autonomous Region in Muslim Mindanao (BARMM), including the Maguindanao police, have ramped up operations to serve some 3,000 arrest warrants throughout the region.

Major Reggie Abillera, the spokesperson of the Maguindanao police, said the police and military have launched a manhunt for the group of one Guipar Abdulkarim, also known as Commander Boy Jacket, which is being blamed for the ambush.

Police did not say what the motive for the ambush was, and neither was it clear if Abdulkarim and Kambal had ties or if the attack was in any way related to the attempt to arrest the fugitive.

The late Ampatuan town police chief had a promising police career – he earned a Ph.D. in public management from the National College of Administration and Governance at the University of the Philippines in Diliman in 2020.

Samson, called “doctor” by those in his circle, was known to be a marksman and well-trained in close quarter battles, a badge holder in scuba diving, a skydiver, a bomb expert, and a specialist in search and rescue missions.

He was well-rounded. Aside from being a highly skilled police officer, he was also an academic.

Samson used to teach at the National Police College in Silang, Cavite, and the National Security Administration at the Philippine Christian University.

At the time of his death, he was a professor, teaching human resource management and transformational leadership at the graduate school of the Pamantasan ng Lungsod ng Muntinlupa.

Before earning his Ph.D., Samson, a Bicolano, received master’s degrees in education and public administration from Bicol University in 2015. – Rappler.com