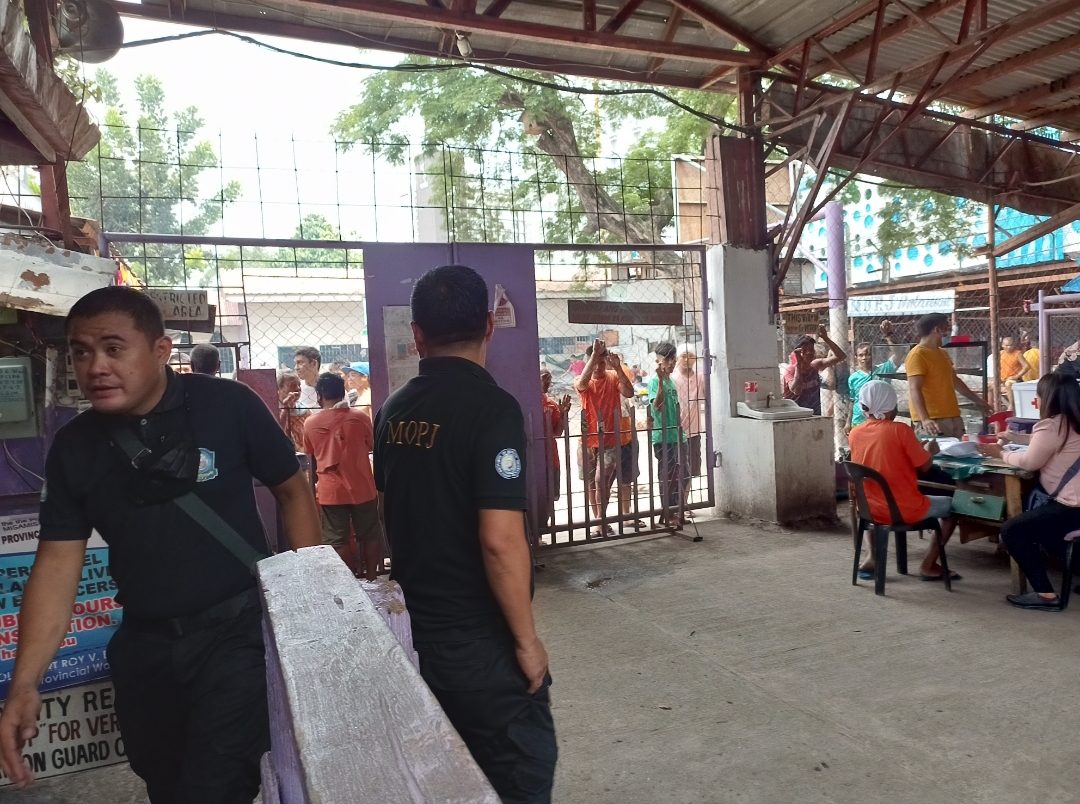 GUARD. Misamis Oriental jailers watch over inmates at the capitol-run prison facility in Cagayan de Oro. Cult leader Cresanto Ercilla and 10 of his followers are detained in this facility.

CAGAYAN DE ORO CITY, Philippines – There are things even hardened criminals just won’t do, such as beating up and burning helpless grandmothers. Even in prison, the thought itself is offensive to their sensibilities.

Misamis Oriental prison authorities on Monday, September 19, said they had to draw a line between cult leader Cresanto Ercilla’s group and other inmates because the cultists were under threat.

“They needed to be separated from the others. Everybody wants to have a piece of them,” said Misamis Oriental assistant provincial jail warden Francis Sarangay.

The 21-year-old Ercilla and his followers were moved to the Misamis Oriental capitol-run prison facility in Cagayan de Oro 10 days after they burned their clan matriarch in a cult ritual in the village of Baliwagan in Balingasag town.

Ercilla was also accused of beating up her grandmother before ordering her thrown into a pile of burning wood “to purge her of her great sins.”

Sarangay said police handed over the 11 cultists on the night of September 5 on orders from regional Judge Jeoffre Acebido.

Ercilla and one of his followers had to be brought to an isolation cell during their first night at the Misamis Oriental Provincial Jail because the jailers worried the two wouldn’t see the next light of day, he said.

“All the PDLs (persons deprived of liberty) can’t wait to beat them up, and we worried about their safety the very moment they arrived here,” Sarangay told Rappler.

Sarangay said some of the inmates became anxious at first when they learned that Ercilla’s group would be transferred from a detention facility in Balingasag.

“At first, they feared Cresanto because it was reported that he was cruel and violent while in detention in Balingasag. But once they were here, the inmates just wanted to gang up on them. So, we were forced to separate them from the rest,” Sarangay said.

He, however, said most of Ercilla’s followers were “manageable” except for two who were behaving like they had gone mad.

Ercilla was charged with masterminding the August 26 murder of his aging grandmother Teofila Camongay-Cabusas in Sitio Palipi, Barangay Baliwagan in Balingasag.

He and his 10 followers – eight of them his relatives who were mostly much older than him – were charged with parricide.

Aside from Ercilla, named as respondents in the parricide case are the following:

Aside from the threat they faced, the cultists were susceptible to COVID-19 because they refused to be vaccinated, according to prison guard Paul Santos.

Santos said Ercilla and his followers were convinced they had supernatural immunity from viruses, including COVID-19.

But the prison nurse said they were trying to talk the cultists into agreeing to get inoculated, and four of them – all female – initially agreed to get jabbed this coming Thursday, September 22.

“We’re hoping that the rest will get vaccinated, too, on the same day,” said the nurse who asked not to be named.

Misamis Oriental jail warden Robert Roy Bahian said some of the cultists were suffering from tuberculosis.

“Swab tests cleared them of COVID-19 infections, but a medical examination showed that two of them have TB,” Sarangay said.

He said the two inmates with lung problems were assigned to one prison cell just like Ercilla and one of his followers who were the most threatened of the cult members.

All the cult members claimed to possess healing powers and were trained to be “spiritual healers” by the Misamis Oriental-based Philippine Benevolent Christian Missionaries (PBCM), a vaccine-hesitant religious group.

The PBCM is a breakaway of the Ecleo political dynasty’s Philippine Benevolent Missionaries Association (PBMA) in the Dinagat Islands in the Caraga region. Its late founder, Tomas Eugenio Sr., was seen as the embodiment of the Holy Spirit by his followers.

Eugenio’s son Charlito, the present PBCM leader, has disowned Ercilla’s group after the murder, saying they strayed from the group’s teachings.

Ercilla claimed to be possessed by Eugenio’s spirit and managed to convince his relatives, including his mother, that he was their new spiritual guru. His murdered grandmother, a loyal Eugenio follower, refused to bow down to him.

Santos said he and other jailers also wanted the cultists not to mingle with the rest of the inmates for fear that they would win converts and spread what authorities considered dangerous ideas.

“We can’t take the risk because they could multiply. The last thing we want is to see a prison facility populated by cultists who think burning aging relatives is a good thing,” he said.

Ercilla and his followers have yet to enter their plea before a court as of Monday.

Sarangay said it looked to him that Ercilla and his group had yet to find a lawyer for their defense. – Rappler.com