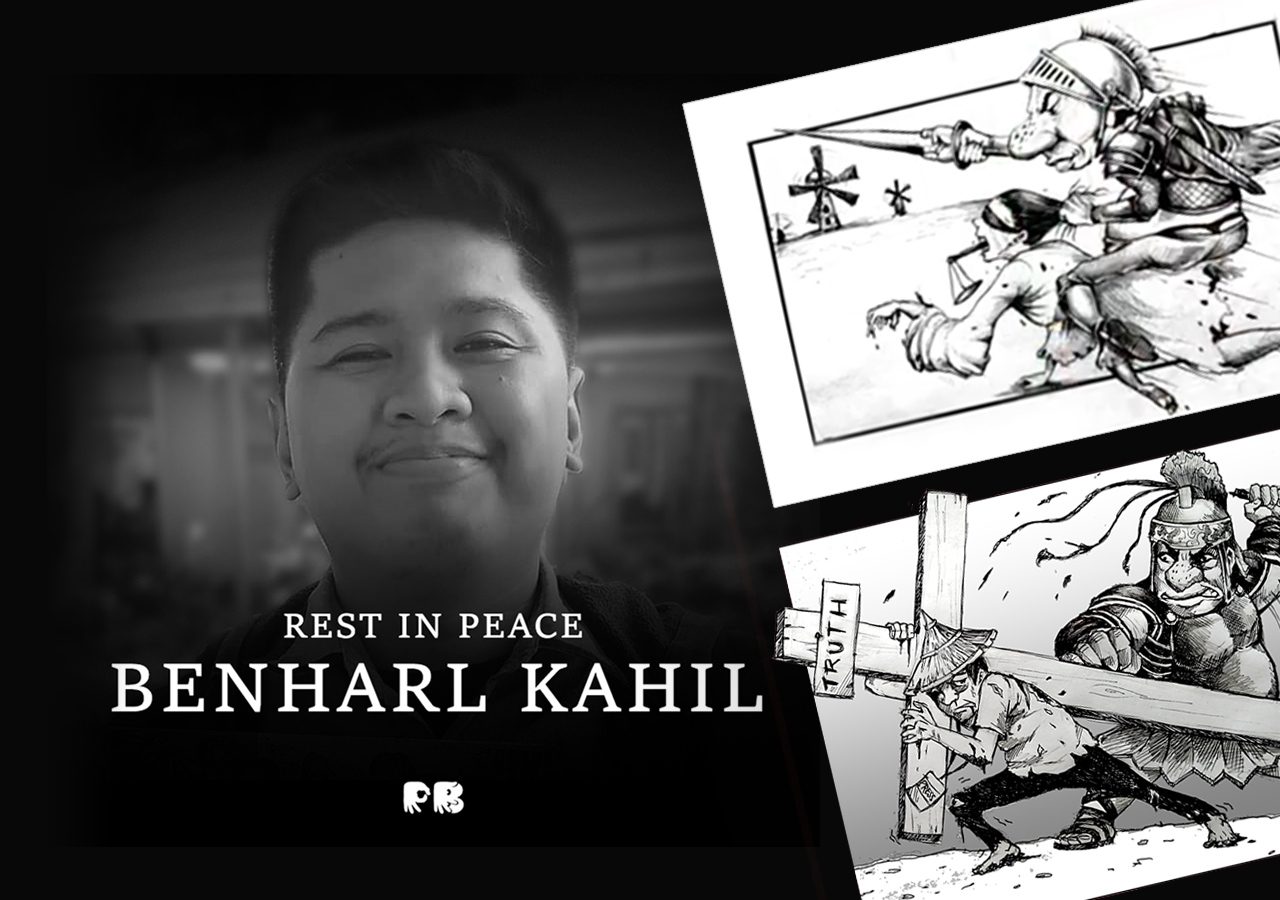 Facebook Twitter Copy URL
Copied
'It could be a personal motive, but we're not discounting the possibility that it was work-related. The investigators are looking at all angles,' says Soccksargen police spokesman Colonel Jean Fajardo

CAGAYAN DE ORO, Philippines – Slain public school arts teacher and award-winning cartoonist Benharl Capote Kahil had been red-tagged as a result of his work against disinformation and for his visual arts that served as his commentary on social ills.

The group Movement Against Disinformation (MAD) said this as cries for justice poured in following the November 5 brutal killing of Kahil in Lebak, Sultan Kudarat.

Gunmen riddled the 27-year-old cartoonist and special program in the arts coordinator of the Lebak Legislated National High School (LLNHS) in an ambush while he was on his motorcycle, on his way home.

Authorities, however, said their initial suspicion was that the murder had nothing to do with Kahil’s advocacy and stinging editorial cartoons.

“It’s quite puzzling because he’s a good citizen, and had no known enemies in the community,” said Lebak town police chief Lieutenant Colonel Julius Malcontento.

He said Kahil got along with people and was even described by LLNHS students as their favorite teacher.

Malcontento told Rappler on Wednesday, November 9, that the victim had a “good reputation, clean record, and was an excellent teacher and good example to the community.”

“It could be a personal motive, but we’re not discounting the possibility that it was work-related. The investigators are looking at all angles,” Fajardo said.

The group MAD condemned the cold-blooded murder and said it has reason to believe that the crime was related to Kahil’s advocacy against disinformation and social injustices.

MAD said Kahil’s editorial cartoons “had exposed him to red-tagging which culminated in his brutal death.”

Philippine Artisan Visayan spokesperson Jude Angelo Gonzaga said the incident was alarming in that Kahil’s murder followed the killing of four media workers in the country this year, including that of radio commentator Percy Lapid on October 3.

Mindanao Gold Star Daily editor-in-chief Cong Corrales called the killing an “act of cowardice, and a desperate attempt at stifling free press and the freedom of expression.”

Human Rights Watch (HRW) senior researcher Carlos Conde said, “It is disheartening that Filipinos who express themselves through their art and their passions are also being targeted in this climate of impunity.”

Conde said it was too early to determine the motive behind his murder, but Kahil’s background as a teacher and as a social commentator through his art necessitates a swift and thorough investigation.

“We recognize the haste with which the Marcos administration has conducted the investigation into the murder of journalist Percy Lapid; we can only hope that the same vigor is shown in ensuring that accountability and justice are accorded Kahil and many other victims of extrajudicial or summary killing,” he said.

In a statement, the LLNHS faculty and staff said, “We stand in solidarity with the Capote and Kahil families in the collective condemnation of the crime, and the clamor for justice.”

“All of us were shocked about the abhorrent killing of Sir Benharl who was known to many as a good, peace-loving, and friendly teacher and person. His demise is a big loss to the academic community,” they added.

The Department of Education (DepEd) Division of Sultan Kudarat also paid tribute to Kahil whose “death might have taken him away quickly but his love, contribution, and memories will live forever in our hearts.”

The ecumenical youth group Student Christian Movement of the Philippines (SCMP) demanded justice and called on the government to put a stop to what it called the worsening culture of impunity in the country.

Kej Andres, the SCMP spokesperson, said, “The killing of Kahil and the worsening culture of impunity sends a message that those who stand for truth are under continuous threat.” – Rappler.com