GRIEVING SUPPORTER. Government workers try to calm down an elderly woman and supporter of the late former Lamitan mayor Rosita Rose Furigay during the final public viewing before the interment in Lamitan City, Basilan, on Wednesday, August 3.

Facebook Twitter Copy URL
Copied
Former Lamitan mayor Rosita Furigay is laid to rest at noon on August 3 in a property of her family in the village of Limo-ok, about half a kilometer away from the Saint Peter the Apostle parish church where Lamitan Bishop Leo Dalmao officiated a necrological mass 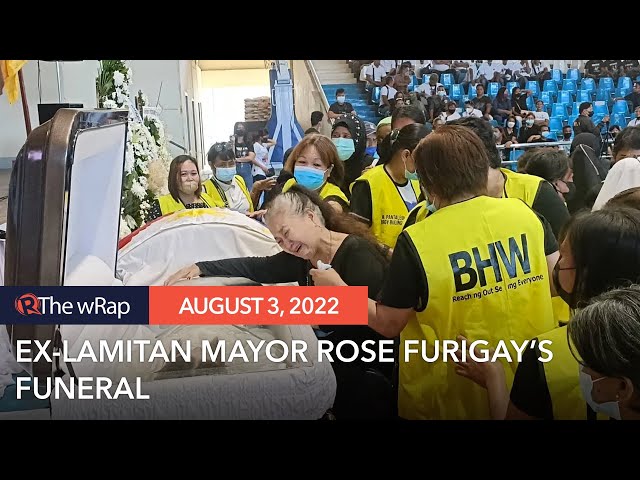 People were in tears during the necrological rites and interment that lasted for about six hours.

The 58-year-old Furigay was laid to rest in a property of her family in the village of Limo-ok, about half a kilometer away from the Saint Peter the Apostle parish church where Basilan Bishop Leo Dalmao officiated a necrological mass.

Furigay was brought to the church at around 10 am, about four hours after the start of a final public viewing at the Lamitan City gymnasium.

The Lamitan police’s conservative estimate was that the crowd reached 1,500 although the 3,000-seat capacity gym and the Saint Peter church were chock-full.

It was sunny, and sweat-soaked mourners lined up on a road leading to the burial site despite the rising temperatures.

Furigay was laid to rest at noon at a special place reserved for her by her family. Hers is the only grave on the family-owned property.

Alinggo recounted how the ex-mayor helped her and her family when she suffered a stroke.

“She (Furigay) shouldered the cost of my hospitalization because we couldn’t afford it,” Alinggo said.

The ex-mayor’s widower, Lamitan Mayor Roderick Furigay, was emotional too as he thanked all those who came and condoled with his family. He tried to hold back without success throughout his speech, wiping his tears now and then.

Their daughter Kelsey also broke into tears as she spoke about her murdered mother before a jampacked gym.

“Today is the day that we officially say goodbye to my mother. It is supposed to be a sad and tragic day, but I know that mama would want all of us to move on from such a sad and painful tragedy,” Kelsey said. “I am strong because I was raised by a strong woman.”

She spoke about compassion, love, and forgiveness.

“Love your family and friends every day… Live life with focus and compassion the way she did… Tell her story that her name lives on,” Kelsey told those who came for the funeral.

Her sister Hannah Rose missed the funeral – she is still recuperating in a hospital in Metro Manila where she is scheduled to undergo another surgery as a result of bullet wounds inflicted on her during a July 24 gun attack blamed on Lamitan-based physician Chao Tiao Yumol.

Police arrested Yumol who admitted to being responsible for the violent attack at the Ateneo de Manila University (ADMU) in Quezon City that wounded the graduating law student Hannah Rose, and killed the ex-mayor and her aide and close friend Victor Capistrano, and school security guard Jeneven Bandiala.

Dr. Yumol was charged with three counts of murder and attempted murder last week for the gun attack, which police said, was due to a personal grudge.

In 2019, the then-mayor Furigay had Yumol’s People’s Clinic in Lamitan City closed down on orders from the Ministry of Health of the Bangsamoro Autonomous Region in Muslim Mindanao (BARMM) for operating without a license from the regional government. Yumol became a staunch critic and accuser of the Furigay couple on and off social media after that. – Rappler.com