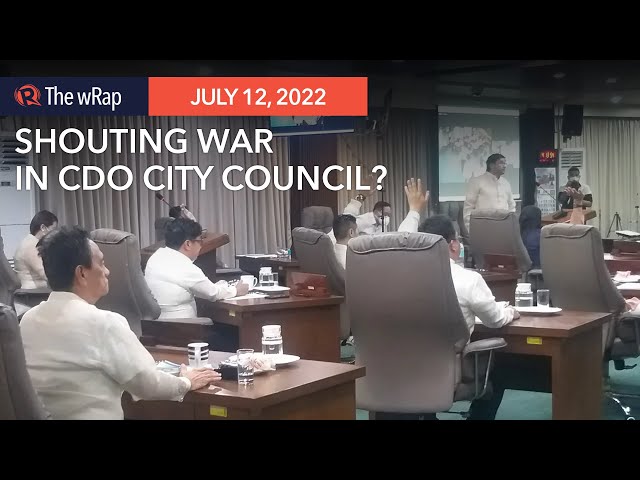 The session was characterized by shouting matches between councilors and the city’s new vice mayor, Jocelyn Rodriguez.

The heated exchange began when Rodriguez refused to recognize the city council’s majority floor leader, Councilor Ian Mark Nacaya, despite his pleas to be allowed to speak.

When other members of the city council majority raised a point of order, Rodriguez asserted that she was the vice mayor and ordered the councilors to sit down.

“Sit down. You are not recognized. Sit down!” Rodriguez told Councilor Roger Abaday who stood up to raise a point of order.

In parliamentary proceedings, a point of order may be raised even when another member is speaking, and it obliges the chairperson to address the query on proper procedures. The presiding officer may rule on it or submit it to the assembly for a decision.

“Yes, madam chair. You are the vice mayor, madam chair,” Abaday said before he went back to his seat, frustrated that Rodriguez kept on asserting that she can choose to allow or disallow councilors from taking the floor.

‘Water under the bridge’

Abaday later told Rappler that he merely wanted to question why Rodriguez was allowing a member of the city council minority to belabor questions on the floor about the composition of the legislature’s committees when the matter was already settled and approved.

Abaday said, “That, to me, was already water under the bridge.”

Rodriguez told Rappler that the city council minority merely resented why members of the majority had multiple city council committees to chair. She complained that only one unwanted committee was given to a member of the minority as a mock consolation.

“We are not asking for the major committees. We just want a few committees to chair so we would have something to work on,” Rodriguez said.

Nacaya told a news conference later that the city council majority was not yet confident that the minority members would help push Mayor Rolando Uy’s legislative agenda.

With Abaday giving up on Rodriguez during the session, a more senior local legislator, Councilor Edgar Cabanlas, took over and insisted that the vice mayor address the query about procedures.

Rodriguez and Nacaya are longtime bitter political foes, and their history of bad blood can be traced back to vote-rich Nazareth where they served as barangay chairperson on separate occasions.

Councilors said there was a growing resentment toward Rodriguez over the way she has been flaunting her powers as vice mayor down to petty matters that were seen as gloating and deliberate acts meant to taunt members of the city council majority.

“Tyrannical,” said Councilor Joyleen Mercedes “Girlie” Balaba when asked about how she felt about the way the city’s new vice mayor has been dealing with the city council majority.

On Tuesday morning, July 12, Rodriguez told Magnum Radio that she was surprised and hurt by what she called Cabanlas’ “disrespect” toward her, being a woman and the vice mayor at that.

Rodriguez also maintained that she may or may not recognize any councilor on the floor as she wishes based on the city council’s house rules.

A night before, she told Rappler that the city council majority was bullying the minority bloc and that its members have gotten used to doing things their way because they had the numbers for years.

Rodriguez said she and former councilor and now Cagayan de Oro 1st District Representative Lordan Suan were treated badly by Mayor Uy’s allies when they served as members of the city council for three years during the last term of then-mayor Oscar Moreno.

Uy and Moreno are political allies.

From two, the city council minority’s members grew to six – including Rodriguez – after the May elections.

Still, the majority retained a dozen seats in the 18-person city council.

“There will be mistakes because this is a learning process. But I did the right thing yesterday, and I would stand my ground and continue doing what is right,” said Rodriguez.

A nurse by profession, Rodriguez started her political career as a barangay chairperson in the city’s 2nd District which her elder brother Rufus represents in the House of Representatives. – Rappler.com