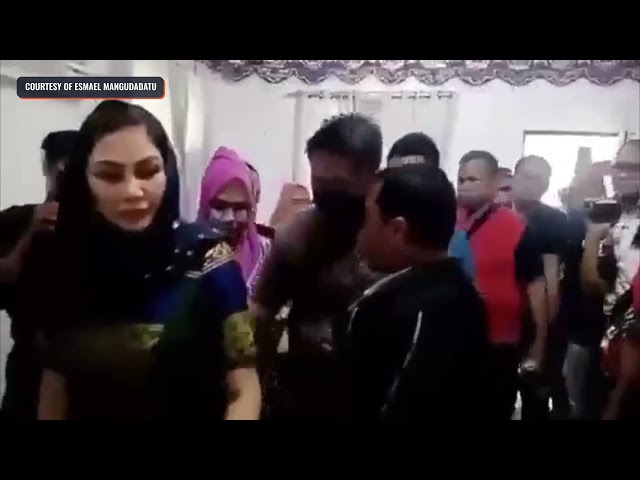 Zihan is the wife of Pandag Mayor Khadafeh “Toy” Mangudadatu, a former assemblyman in the Bangsamoro region, who was arrested by the Criminal Investigation and Detection Group (CIDG) in Davao City for a double murder case on September 10.

Toy is reportedly out on bail.

A video posted on Facebook by Toy’s brother, former Maguindanao governor and representative Esmael “Toto” Mangudadatu, showed a commotion inside an office where Zihan was, shortly after the governor entered it.

(Vice Mayor Zihan Mangudadatu was taken hostage and fired at but, fortunately, was not hit. Before that, Governor Mariam S. Mangudadatu grabbed her cell phone. This happened inside the vice mayor’s office. Many councilors and employees were hurt when they were attacked.)

Police quickly denied claims that a hostage-taking crisis took place, saying that the situation was under control.

Sermese said there was a commotion, but the police and soldiers came and pacified the quarreling groups.

Toy quickly went live on Facebook, appealing to President Ferdinand Marcos Jr. to look into what was happening in Pandag town.

He alleged that his family has been subjected to harassment for days, and his wife could not leave the Pandag town hall because armed men supposedly surrounded it.

He said he was worried for his wife, and over the escalating tension in Pandag which “could become another Maguindanao massacre.”

On October 18, Mariam administered the oath of office of Mohajeran Odjie Balayman, Toy’s rival in the Pandag mayoral race, after a regional court ruled that he garnered more votes than Toy during the May elections.

Toy’s camp has questioned the move to unseat him. His wife has asserted that she has assumed office as Pandag’s acting mayor. – Rappler.com