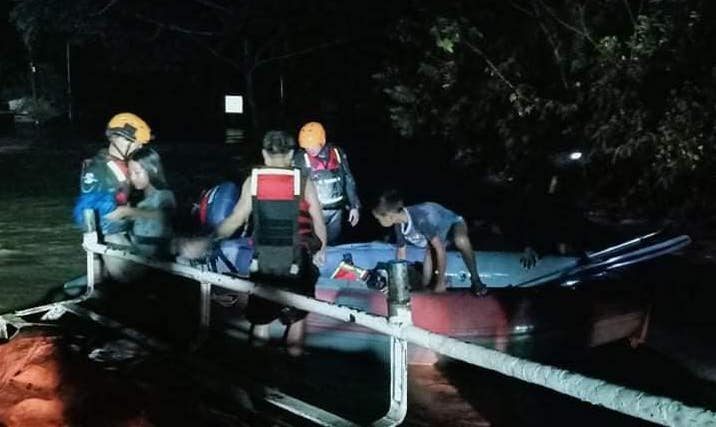 EVACUEES. People are evacuated from a flooded area in Davao de Oro

Facebook Twitter Copy URL
Copied
Floods and landslides due to continuous rain force thousands of families to flee their homes and seek refuge elsewhere in the provinces of Davao de Oro and Bukidnon, and Davao City

BUKIDNON, Philippines – Days of heavy rain and threats of flood and landslides forced over 6,000 families to evacuate to safer grounds in two regions in Mindanao alone as the state weather bureau raised the alert level and warned of more rainfall in 20 provinces in the country’s second island.

Threats of floods and landslides due to continuous rain forced thousands of families to flee their homes and seek refuge elsewhere in the provinces of Davao de Oro and Bukidnon, and Davao City.

Cagayan de Oro City, the capital of Northern Mindanao, has been seeing days of street flooding in many of its urban areas again this week.

In Bukidnon, some 1,274 families sought shelter in various evacuation centers because of flooding and landslides early this week, according to the province’s PDRRMO.

Thousands of families also evacuated to safer grounds in Davao City due to floods and after rivers started to swell. Alfredo Baloran, chief of the Davao City Risk Reduction and Management Office (CDRRMO), said they counted some 2,064 families who fled their homes due to threats of rising floodwaters as of Wednesday afternoon alone.

The situation was so bad that the Davao de Oro provincial board approved on Friday, April 8, a resolution that placed the province under a state of calamity.

Davao de Oro officials said the province already suffered substantial damage to infrastructure and agriculture. Some power lines were down and the livelihood of many people was affected in at least seven towns.

The resolution would allow the Davao de Oro provincial government to use its reserved calamity funds for disaster response and relief aid.

Joseph Randy Loy, chief of Davao de Oro Provincial Disaster Risk Reduction and Management Office (PDRRMO), said the province recorded more than 5,000 individuals or about 3,000 families were sent to evacuation centers in the seven towns affected by the flooding.

“Most of the evacuees are now taking shelter in the evacuation centers in their respective areas; others are staying in their relatives’ homes,” Loy told the Serbisyong Oro Mismo online information program on Thursday.

Davao de Oro Governor Jayvee Tyron Uy suspended classes and work in the province for two days but lifted the order on Friday when floodwaters receded and heavy rain ceased.

Some areas were impassable, including a road and bridge in San Fernando town in Bukidnon. The bridge serves as a link between San Fernando and Talaingod town in Davao del Norte.

Flooding and landslides were also reported in Valencia City and the Bukidnon towns of San Fernando, Maramag, Quezon, and Kitaotao since Wednesday.

In its 6 am Saturday bulletin, Pagasa warned of heavy rainfall in the Dinagat Islands, a province in the Caraga region that is still picking up the pieces after it was devastated by Typhoon Odette (Rai) in December 2021.

PAGASA warned of heavy rainfall in Dinagat and Maguindanao, particularly in Cotabato City and the towns of Parang, Sultan Kudarat, and Datu Odin Sinsuat.

It also forecast light to moderate and, at times, heavy rain in the following Mindanao provinces:

Grace Cantal-Albasin is a Mindanao-based journalist and an awardee of the Aries Rufo Journalism Fellowship. Herbie Gomez is Rappler’s Mindanao Bureau coordinator.