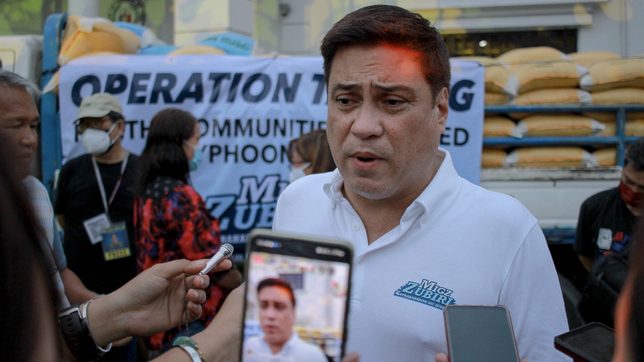 SLOW RESPONSE. Senator Juan Miguel Zubiri speaks to Cagayan de Oro reporters and criticizes the government for its slow response in the aftermath of the Typhoon Odette devastation in Mindanao and the Visayas.

Facebook Twitter Copy URL
Copied
'There is a crisis. We can set aside and do away with red tape and protocols' to release funds and fuel, and to repair power lines and damaged roads, says Senator Juan Miguel Zubiri

CAGAYAN DE ORO, Philippines – Senator Juan Miguel Zubiri lashed out at what he described as the national government’s slow response in the aftermath of Typhoon Odette (Rai) that devastated at least 10 regions, mostly in the Visayas and Mindanao.

The senator, who hails from Bukidnon, also complained of red tape, which he said was an obstacle in efforts to bring back normalcy in areas crippled by one of the worst environmental disasters in the country in 2021. Odette made landfalls on December 16 and 17, affecting parts of all island groups of the country.

“Our response is sadly slow. We wish our response was quicker. There are bottlenecks in the release of fundings,” said Zubiri who came to Cagayan de Oro with relief aid for families affected by the onslaught of Typhoon Odette on Thursday, December 23.

The same bottlenecks have prevented the government from addressing the immediate problem about the rising cost and shortage of fuel, and the disrupted supply of electricity in many of the affected areas in Mindanao and the Visayas, he said.

People found themselves helpless in the typhoon-stricken areas. Soaring prices and scarcity of fuel for power-generation requirements, especially for water pumping stations, have become a major problem, according to Zubiri.

He said oil companies wanted to donate fuel to local governments in areas devastated by the typhoon to help in their disaster response but were unable to because of protocols, and they had to pass the Department of Energy (DoE) first.

“There is a crisis. We can set aside and do away with red tape and protocols to release the fuel,” Zubiri said.

Zubiri said many areas still had no supply of potable water and electricity, and the towers of the National Grid Corporation of the Philippines (NGCP) were still down a week after the devastation.

He said local power utility companies and cooperatives were quick to replace and erect electric posts toppled down by the strong winds of Odette, but the problem was on the main lines of the NGCP.

“If there are no NGCP main lines, our electric cooperatives cannot do anything,” Zubiri said. “They need permission from the DOE for them to repair and reconstruct. Stumbling blocks and bottlenecks should be removed during the time of catastrophe.”

Even road clearing operations by the Department of Public Works and Highways (DPWH) were slow and wanting a week after the disaster, he said.

“We always find ourselves in this same situation. We have to learn from our mistakes. Hopefully, by 2022, we will have a new administration. Let’s come up with better disaster resilience and preparedness measures,” Zubiri said.

He said he was worried that the recovery period for many of the devastated areas would take years given the extent and immensity of the damage.

In Surigao City, Mayor Ernesto Matugas Jr. called for help and appealed to local governments spared by Odette’s fury to send aid to the city that saw widespread damage in the aftermath of the worst typhoon to ever hit his city in recent years.

Local officials were doing everything they can to provide relief aid to people adversely affected by the disaster.

The Task Force Bangon Siargao, for instance, brought 25 tons of relief goods to Surigao del Norte and distributed these to families in typhoon-stricken communities as of Monday, December 20, according to Representative Francisco Jose Matugas II of the province’s 1st District.

Nearly half of these were distributed to families in the outlying villages of Surigao del Norte, and the Navy and Coast Guard helped in bringing the relief aid to the islands.

Limited emergency communications systems have also been set up at the Siargao Airport and the towns of General Luna, Socorro, and Dapa, Surigao del Norte. Telecommunications signals remained a problem in many areas in the province, especially in the islands.

In neighboring Dinagat Islands, Globe Telecommunications restored its signals in a few areas in the province on Tuesday, December 21.

The stability of telecommunications services is important to “ensure that we are once again connected to our loved ones and that our relief operations will go on smoothly,” said Dinagat Governor Arlene “Kaka” Bag-ao.

Jeff Crisostomo, Dinagat capitol spokesperson, said the provincial government was able to secure many forms of assistance from private, civil society, and humanitarian organizations in the country and abroad on top of the relief assistance from the national and other local governments. – Rappler.com