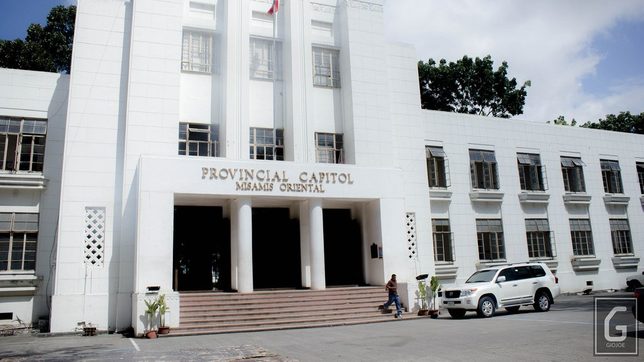 PROVINCIAL CAPITOL. File photo of the Misamis Oriental Provincial Capitol taken in May 2014.

That’s understandable – Obeñita works as a senior tourism operations officer at the provincial government, the third person in command of the capitol team that has been giving Misamis Oriental’s tourism a push.

Her superiors, co-workers, and friends in the capitol, naturally, were elated, cherishing the euphoria that has been building up in the hours after her big win in Egypt on Saturday morning, October 30, Philippine time (Friday night, October 29, in Egypt).

Misamis Oriental’s tourism chief Jeffrey Saclot, Obeñita’s immediate superior and supporter, said he was “more than happy and proud to have a staff who has made a name for herself and elevated the province of Misamis Oriental to greater heights, especially in terms of tourism promotion.”

Peñalosa said she was confident that Obeñita, known in the capitol as a smart public speaker, would bring home the crown when the Philippines’ bet was asked to answer a question.

While watching the final minutes of the pageant, Peñalosa said she played with the thought that “makasulod lang na sa portion nga naay Q and A, sulod nana kay mukaon jud nag microphone (if she makes it to the Q and A portion, she’s going to win because she’s really good with the microphone).” Misamis Oriental Governor Yevgeny Vincente Emano, who was behind Obeñita in her Cinderella journey from Miss Cagayan de Oro in 2019, Binibining Pilipinas-Intercontinental, and now, Miss Intercontinental, said: “Her victory is something worthy to be shared by all Misamisnons, and the whole Philippines in general. I am beyond grateful and proud.”

Emano said Obeñita would continue to serve as Misamis Oriental’s tourism ambassador “to the whole world.”

“It shows that a Mindanaoan can best those from other countries,” Emano said.

He said he saw Obeñita’s win as an opportunity to give tourism in Misamis Oriental and the Philippines a boost.

Provincial board member Gerardo Sabal III said he too felt very proud and happy for Obeñita for the “historic win.”

Although the second Filipino to win the title, Obeñita is the first Kagay-anon and Mindanaoan to bag the coveted Miss Intercontinental crown.

Filipino-Australian Karen Gallman was the first Philippine bet to win the crown in 2018.

Deputy Speaker and Cagayan de Oro 2nd District Representative Rufus Rodriguez joined other well-wishers in congratulating Obeñita: “Cindy truly deserves to win the crown because of her beauty, brains and character. Cagayan de Oro and Misamis Oriental are very proud of Cindy and her victory!”

Like Emano, Northern Mindanao’s tourism chief also saw Obeñita’s feat as a chance to strengthen tourism in this part of the country.

Department of Tourism (DOT) regional director Mae Salvana-Unchuan said Obeñita’s work as a tourism officer “ensures that she understands and is in tune to the challenges of our tourism industry and our communities so she is in a better position to champion our tourism industry.”

Unchuan said the victory was very timely as the country moves to slowly open tourism, and create livelihood opportunities and revenues badly needed by related businesses.

“Bringing Misamis Oriental and representing the Philippines on the world stage as Miss Intercontinental-Philippines was  already a big boost to the province, northern Mindanao and our country. Now that she has won the title of Miss Intercontinental 2021, she can truly be an ambassadress for our tourism,” Unchuan said. – Rappler.com