Murad: From a hardliner to voice of moderation 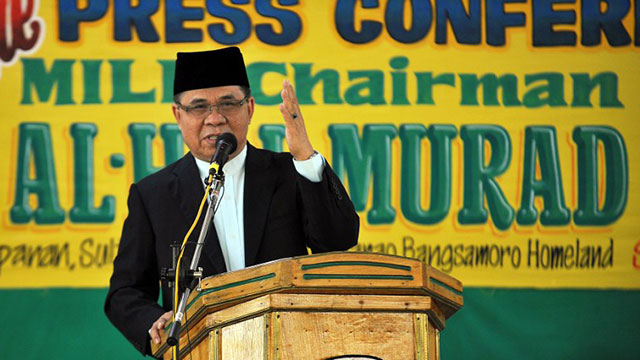 MORO LEADER. chair Al Haj Murad Ebrahim, chair of the Moro Islamic Liberation Front, the armed component of the largest Moro rebel group in the Philippines, has been a voice of moderation.

On Monday, October 15, Murad will go to Malacañang to sign a preliminary agreement that would hopefully put to rest a region that has seen the worst of wars. He brings with him hopes that the guns and cannons that have snapped the lives of thousands of combatants and civilians will forever be silenced.

It is the violence in his Moro homeland that brought Murad into the movement that for years had pushed for separation from the state. Today he seeks to end that violence, give up his group's call for independence, and play a key role in ensuring peace.

Murad was one semester short of finishing his civil engineering course from the Notre Dame of University in Cotabato City when he joined the Moro National Liberation Front in 1972.

For years, he was a largely unknown but leading cadre of the MNLF.

Murad was a prominent figure in the 2001 peace process even though he earned his reputation as a cold, calculating military tactician.

NDF Mindanao spokesperson Jorge Madlos said he met with Murad to sign a compact of political cooperation between the two largest armed rebel groups in Mindanao about a decade ago.

Despite his fearsome military reputation, Murad has always been soft-spoken. He always commanded respect although he seldom spoke. “He leads by example. He is serious when he talks which I think made him earn the respect of his people,” said reporter Romy Elusfa who also described Murad as a polite man.

Despite the seriousness of his warning, Murad sounded deliberate and remained soft-spoken.

In August 2011, Murad held an unprecedented meeting with President Benigno Aquino III in Japan. In that Tokyo hotel meeting, both Murad and Aquino agreed to expedite the peace process and were optimistic a peace pact will be signed before the end of this year.

On Monday, October 15, the gates of the presidential palace in Malacañang will be opened to one of the most feared "enemies" of the state. Murad will be entering its halls both as a Moro revolutionary and as a messenger of amity.