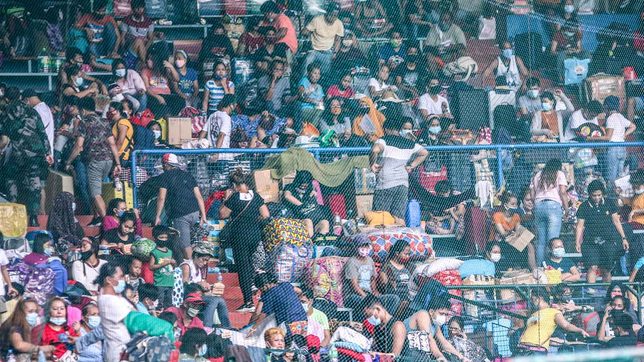 JAMPACKED. Thousands of Locally Stranded Individuals wait inside the baseball stadium at Rizal Memorial Stadium during the Hatid Tulong send off program on Saturday, July 25, 2020. Photo by KD Madrilejos/Rappler

The national government canceled its plan to require all locally-stranded individuals (LSIs) to undergo a reverse-transcription polymerase chain reaction (RT-PCR) test before arriving in their home provinces. Instead, they’ve placed the burden on testing on local governments accepting the stranded.

This comes after Presidential Spokesman Harry Roque said LSIs just need to take a rapid antibody test, which only detects antibodies caused by the body’s immune response to the virus, rather than the virus itself.

Rapid tests are not as accurate as RT-PCR tests which remain the “gold standard” of COVID-19 testing, as Roque himself often says.

But in the Thursday briefing with Galvez, Roque said rapid tests are “not completely inaccurate.”

Galvez said there is no need for the national government to make LSIs take swab tests because, anyway, the local governments that will be accepting the stranded persons supposedly have the capability to properly test and isolate them.

(What we do with LSIs is we coordinate with local government units because normally, what they do is, they have the capacity to test.)

He said all the regions in the country now have testing capacities and LGUs allocate a certain number of tests for LSIs who arrive in their jurisdictions. (READ: Cagayan de Oro expands COVID-19 isolation facilities)

If the national government were to require swab tests as well from Metro Manila, there would be “double handling,” said Galvez.

He expressed great confidence in the capability of LGUs to handle stranded people, who number in the thousands.

On the weekend of July 25 to 26 alone, over 8,400 LSIs were sent home to provinces in Mindanao and the Visayas.

(Our LGUs want to be sure that’s why they want that when the LSIs arrive in their areas, it should be clear that they don’t have COVID-19.)

He added that LGUs are strict in requiring LSIs to complete their 14-day quarantine after arriving in their respective hometowns.

In another part of the press conference, Galvez said the second phase of the Duterte government’s COVID-19 plan is to rely on local governments and private businesses.

Multiple towns and cities in the Visayas and Mindanao have said additional COVID-19 infections there came from LSIs from Metro Manila who did not get proper testing.

In some cases, LSIs were the ones who brought the virus to previously coronavirus-free localities.

This was why the national government initially wanted to make RT-PCR tests mandatory for them.

Roque even justified the new rule by saying back in June, “This is to make sure they [LSIs] are [COVID-19] free and, at the same time, we have to protect the communities and LGUs (local government units) they are going to.”

Interior Secretary Eduardo Año had previously attributed the rise in cases to the return of overseas Filipino workers and LSIs. OFWs, however, are all required to get RT-PCR tests, which are even shouldered by the government.

The return of droves of LSIs has left local governments struggling to free up space in their isolation centers while also ramping up treatment and isolation for their longtime residents. – Rappler.com