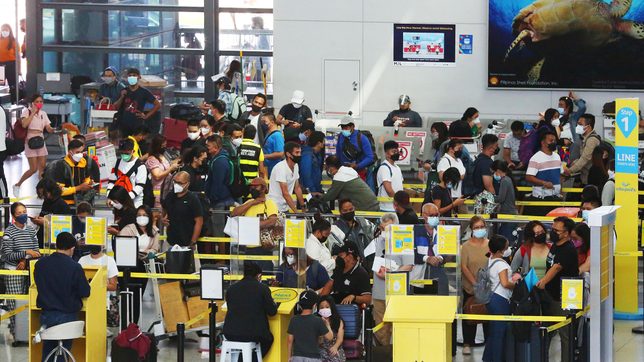 TRAVEL. Passengers queue at Ninoy Aquino International Airport Terminal 3 in Pasay City on December 23, 2021 for flight to provinces for the holidays.

MANILA, Philippines – The Department of Health (DOH) reported the Philippines’ fourth case of the COVID-19 Omicron variant that has been sweeping across the world and driving fresh surges in cases in several countries.

In a press briefing on Monday, December 27, Health Undersecretary Maria Rosario Vergeire said the fourth case was a 38-year-old female who travelled from the United States. She arrived at the Ninoy Aquino International Airport on December 10 and was onboard Philippine Airlines flight PR 127.

Before traveling, she presented negative test results from PCR swab taken on December 7.

On December 13, she observed itchiness in her throat and colds. Following quarantine protocols, she was tested on December 14, the fifth day after her arrival. Her results released the following day, December 15, turned out positive. She was then transferred to an isolation facility.

She was discharged 10 days later on December 24, no longer showing symptoms.

Vergeire said the patient remains to be asymptomatic as of this time and was scheduled to be re-tested Tuesday, December 28.

The DOH noted that the case had exposure from friends in the US whom they met a day before departing for the Philippines. Health officials in the US recently observed that Omicron had accounted for some 73% of new cases less than three weeks after it detected its first case on December 1.

Meanwhile, the DOH said it was coordinating with the Bureau of Quarantine and Department of Transportation for a full flight manifest and to monitor possible close contacts of the case.

Last December 15, the DOH announced the detection of the country’s first two cases of the Omicron variant – incoming travelers who had been isolated in a Bureau of Quarantine facility. The country’s third case was later reported on December 20.

Data in recent weeks has provided a clearer picture of Omicron’s spread, severity, and effect on vaccines, hinting at unprecedented transmissibility and a steep challenge ahead for countries.

After its detection in late November, Omicron has been detected in at least 106 countries. Evidence so far continues to indicate that Omicron has a growth advantage over the Delta, even in countries with high levels of immunity.

Several studies have so far suggested that Omicron infections may results in milder illness, although experts said more time and data was needed to confirm this. Despite its possibly milder severity, experts also warned that increasing transmission can still drive hospital admissions, placing further burden on stretched health systems.

The DOH appealed to the public to continue proper mask wearing and be conscious of observing health measures, while local governments were urged to step up immediate case detection, isolation, and contact tracing to help slow the spread of infections. – Rappler.com