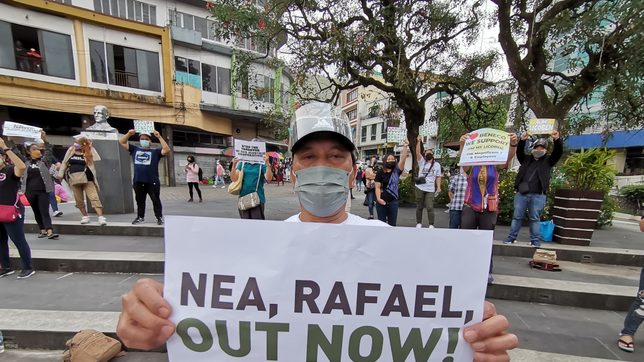 PROTEST. Members of the Tongtongan ti Umili and other concerned groups as well as the member-consumer-owners hold a lightning rally at the People's Park to protest what they called the illegal and unlawful takeover of former PCOO assistant secretary Marie Rafael of the Benguet Electric Cooperative office at South Drive with police officers in tow.

Facebook Twitter Copy URL
Copied
Employees on duty take phone videos of the raid-like takeover of the building and post them on their union page, raising the alarm and fueling concern among the Baguio-Benguet community

Beneco project supervisor Omar Mayo of the NEA said the agency had deputized the police to implement a suspension order against seven Beneco board of directors and engineer Melchor Licoben, the board-appointed general manager.

Mayo presented the NEA Board of Administrators’ Referendum No. 9, ordering the police to enforce the suspension order.

“As such, the PNP is directed to prevent the entry of the suspended Board Directors and Engineer Melchor S. Licoben into the Beneco South Drive Complex as well as in other edifices of Beneco, to employ all necessary steps from preventing the said suspended Beneco officials from exercising authority, and use reasonable means to carry out the suspension order,” the NEA order stated.

Employees on duty caught the raid-like takeover of the building on their mobile phones. They posted it on the employees’ union page, raising the alarm and fueling concern among the Baguio-Benguet community.

The incident came weeks after the Beneco General Membership Assembly affirmed Licoben as general manager. Member-consumers of the electric cooperative also declared support for the seven board directors suspended by the NEA.

Mayo, however, asserted that Rafael had long assumed as general manager. Rafael was a former assistant secretary at the Presidential Communications Operations Office.

The NEA Board of Administrators endorsed Rafael as the lone candidate for general manager after she garnered the highest score in the selection process. However, under NEA Memorandum No. 2017-035, all qualified applicants should be forwarded for the Beneco board’s consideration.

The NEA affirmed her appointment on July 29 amid unresolved issues in the selection process and Rafael’s qualification, protest from rural power distributors and the cooperatives, and status quo requests from different officials.

Meanwhile, the Beneco directors affirmed Licoben’s designation as general manager during their August 31 special meeting and rejected Rafael. Beneco employees and most of the local governments in the service area supported the decision.

“I had to implement the order, otherwise the government will be a laughing stock,” Mayo said.

The suspension stemmed from a September 6 complaint filed by Rafael against the board for gross insubordination, indirect contempt, and “willful violation of NEA rules.” Her complaint cited their refusal to accept her designation as the new general manager.

Somngi said that around 50 police officers entered the headquarters “like they were conducting commando operations.” He said that what the police did was illegal.

“We went there (South Drive) to ask if they have any court order to forcefully takeover Beneco, and they failed to present any,” he stressed.

“If they were there to enforce the NEA suspension order, why did it have to be at 3 am and why did the police have to be in full battle gear?” he asked.

Licoben said the police who entered the compound and offices carried long firearms. He also said the police barricaded the entrances. Initial reports also indicated that the police also took the recorder of the CCTV system and damaged a glass door.

“As far as we are concerned, what the police did was illegal and we are looking into possible legal actions against the police and NEA,” he added.

According to Mayo, entering the Beneco premises at dawn was decided in a meeting. But he did not elaborate.

“It is unfortunate that Beneco is being dragged into a leadership crisis by some quarters at the time when it was able to reach the highest pedestal of the country’s power industry,” he said in a statement.

“And its general manager Engineer Melchor Licoben has proven his competence and efficiency. He also has had no integrity issue whatsoever,” he said.

“So I reiterate: Why fix something that is not broken? And at this time when we are confronted with numerous problems aggravated by the damages wrought by the recent typhoon? Why?” the mayor lamented.

The Philreca asserted that the NEA has no power to take over the management of Beneco unless they can prove that it is an ailing cooperative.

“We condemn the Philippine National Police for allowing the agency to be used in an illegal act and protecting only the one-sided interest of Rafael, PS Mayo and NEA-BOA by blindly following the orders from its chain of command instead of protecting the interest of the member-consumer-owners and maintaining neutrality,” the Philreca added.

The Philreca urged PNP chief Police General Guillermo Eleazar and the entire police leadership to refrain from taking sides on this issue.

The Beneco headquarters was empty throughout Monday except for Rafael, Mayo, and the police.

The employees no longer reported for work and staged a sit-down protest.

However, Licoben assured consumers that they would continue repairing power lines in Benguet destroyed by Severe Tropical Storm Maring (Kompasu). He also directed bill payments to alternative collection agencies like banks and stores.

Beneco Employees Labor Union vice president Mark Anthony Amisola said the police barred some employees from entering the South Drive headquarters. Others were afraid to report for work after watching the video footage of how police forced their way into the office.

“Who would feel at ease to work in such an environment where there are armed policemen? Why are they armed? It’s like they are going to war?” he stressed.

Amisola said they were waiting for further instruction. He reiterated that they would only take orders from Licoben. – Rappler.com