Facebook Twitter Copy URL
Copied
The Mandaluyong police says it is going after the driver of the owner of the white Toyota RAV4 involved in the incident which happened at the intersection of Julia Vargas Avenue and St. Francis Street 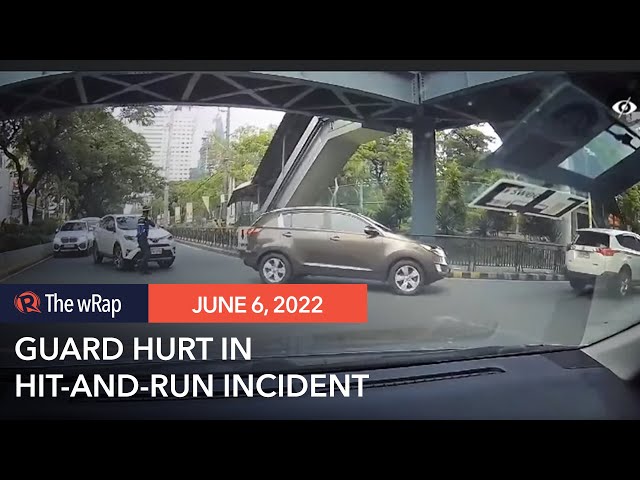 MANILA, Philippines – A video clip of a security guard being violently run over by an SUV went viral through a Facebook post made on Sunday, June 5.

According to a GMA report, the security guard, identified as 31-year-old Christian Joseph Floralde, was directing traffic at the intersection of Julia Vargas Avenue and St. Francis Street in Mandaluyong City, at around 4 pm on Sunday, when the incident occured.

The violent scene, captured on the dashcam by Facebook user Miko Angelo Ramos, drew shocked reactions from those riding in Ramos’ vehicle.

The SUV sped away from the scene, while the guard is shown on all fours unable to stand.

The GMA report also added that the Mandaluyong police have identified the vehicle’s plate number NCO 3781, and described it to be a white Toyota RAV4. The victim is reportedly currently having difficulty breathing, is on oxygen support, and also sustained head wounds.

On Ramos’ video, which has been viewed 2.1 million times as of posting, netizens have expressed their fury over the SUV’s driver, calling for the driver to be jailed, have the license revoked, and pay damages to the victim. “Dapat diyan ikulong, at i-ban sa pagmamaneho habang buhay,” said one commenter. (The driver should be jailed, and banned permanently from driving.)

In a separate report on ABS-CBN’s Teleradyo, Mandaluyong police have said that driver has been identified and will be charged with frustrated murder.

Senator-elect JV Ejercito on Monday, June 6, offered a P50,000 reward “for any info regarding this evil and idiot driver who purposely ran over a traffic enforcer.” – Rappler.com