#DuterteDuwag? Netizens weigh in on Duterte vs Carpio debate challenge 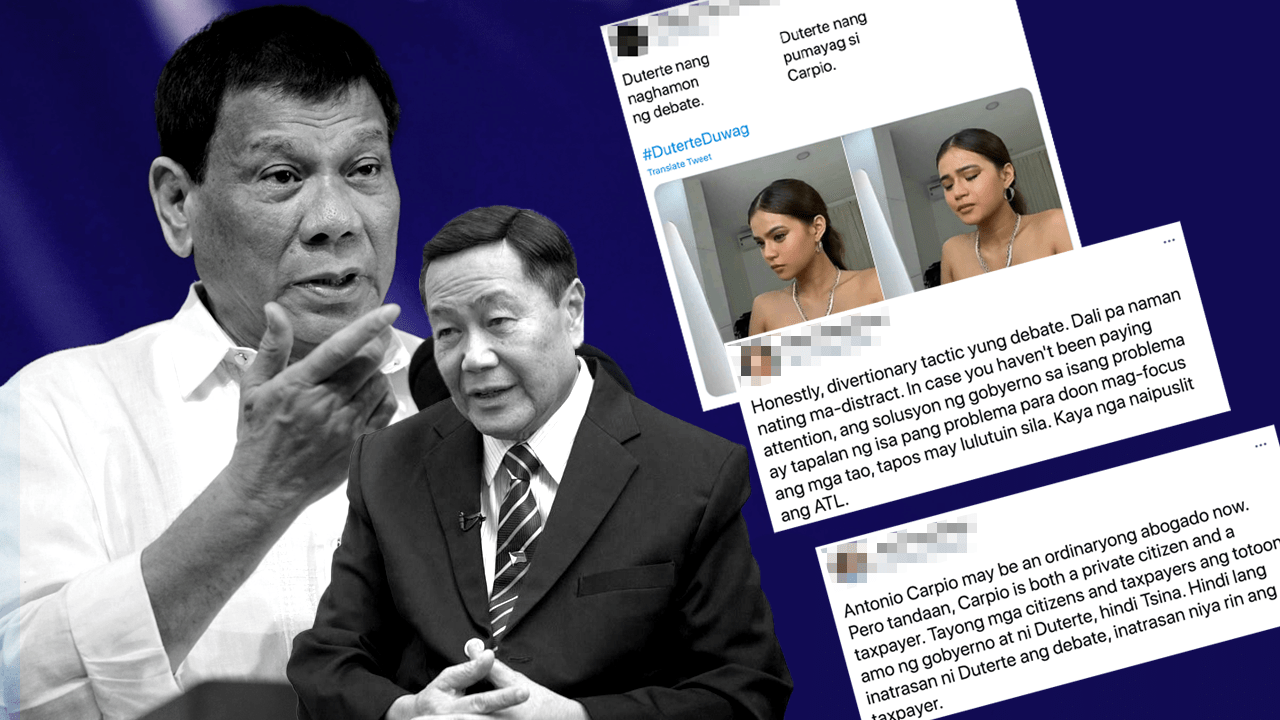 Facebook Twitter Copy URL
Copied
Netizens slam Duterte for his inability to keep his word, while others feel the debate dare is a distraction from more urgent matters

The latest issue that Filipinos are closely monitoring is the exchange between President Rodrigo Duterte and retired Supreme Court senior associate justice Antonio Carpio over the West Philippine Sea.

The next day, Carpio called the President’s bluff and accepted the challenge, and urged Duterte to resign immediately. Malacañang, in response, said the President was advised not to participate in the debate – effectively backing out of his own challenge – and said he would send Presidential Spokesperson Harry Roque to debate with Carpio.

Many netizens used the hashtag and posted memes poking fun at the President’s sudden withdrawal – from a challenge he initiated himself.

Some users also talked about how Duterte’s decision to back up was symptomatic of his inability to stand up for the Filipino people.

“Kung hindi mo kayang panindigan ang iyong simpleng salita, paano ka maninindigan para sa bansa (If you can’t stand by your own word, how will you stand up for the country)?” wrote Leisbeth Recto.

Other netizens said they weren’t surprised that Duterte backed out of the challenge, given his track record of unfulfilled promises.

However, some Filipinos feel that the debate dare is a mere distraction from more urgent matters. Twitter user @Punongbayan_ deemed the challenge a “diversionary tactic” and said the administration has a habit of covering up larger issues with attention-grabbing albeit less important events.

“Dapat singilin pa rin si Duterte sa failed pandemic response, red-tagging, and everything else he wants to distract us from with this spectacle,” he wrote.

(Duterte should still be held accountable for the failed pandemic response, red-tagging, and everything else he wants to distract us from with this spectacle.)

Here’s what other people had to say:

What are your thoughts on the issue? – Rappler.com