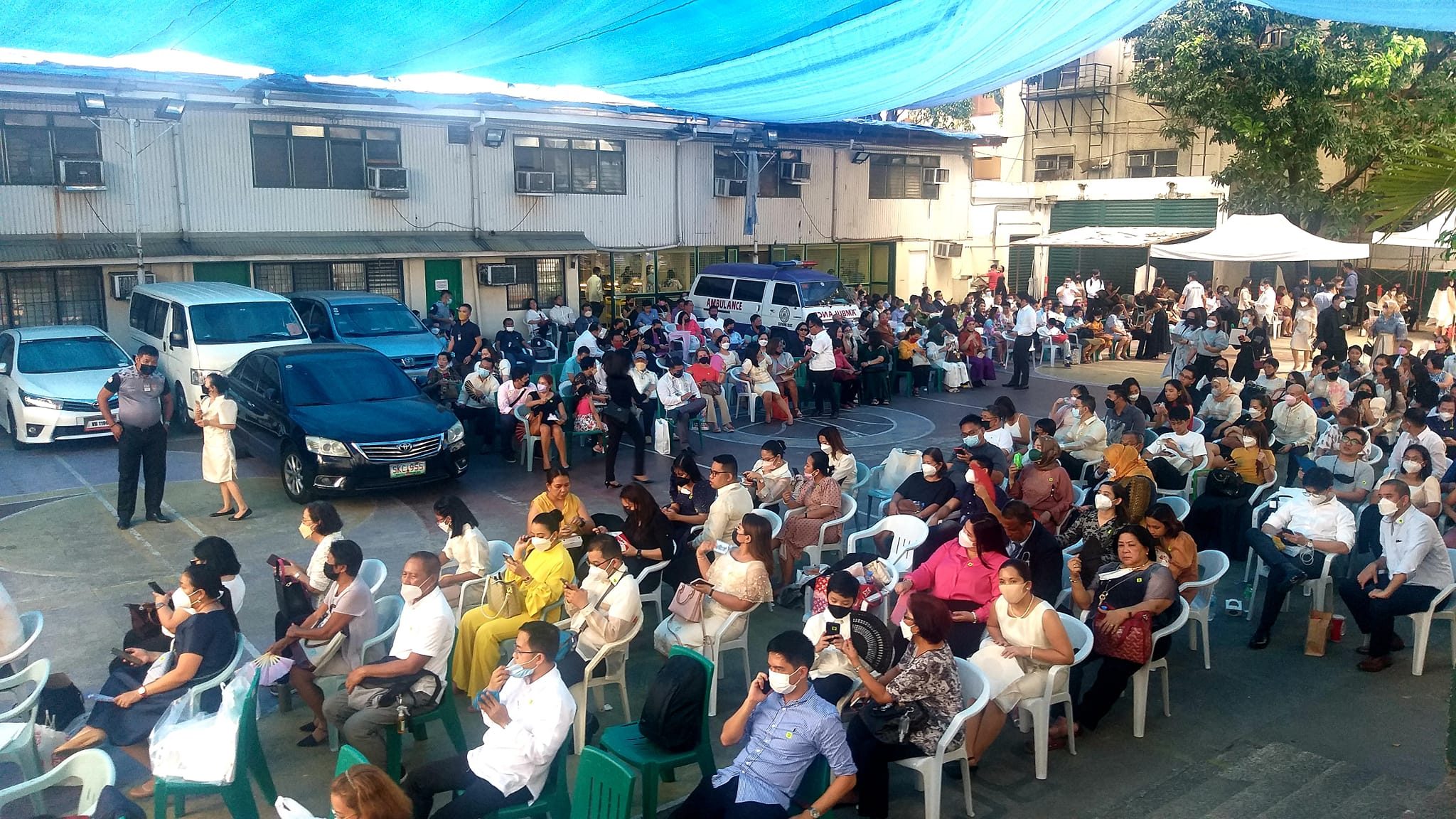 WAITING. New lawyers and their families wait for their numbers to be called at the quadrangle of the Supreme Court's Centennial Building on Thursday, May 5.

Facebook Twitter Copy URL
Copied
New lawyers flock to Padre Faura Street in Manila, all dressed up for the occasion – the final grueling step and culmination of their years of labor and long wait to become officers of the court

MANILA, Philippines – As if the two-year wait for the bar exams due to COVID-19 pandemic restrictions wasn’t enough, the Supreme Court (SC) unwittingly made hundreds of new lawyers and their families sweat in line for hours at the quadrangle of its Centennial Building on Thursday, May 5.

It was the second day of the grueling signing of the Roll of Attorneys, and the new lawyers flocked to Padre Faura Street in Manila, all dressed up for the occasion – the final step and culmination of their years of labor and long wait to become officers of the court.

SC employees said it was worse on the first day because many new lawyers scheduled to sign the attorneys’ roll on Wednesday were able to do so past midnight, the following day.

The SC extended the first day of the roll signing until 1 am Thursday, just hours before it opened its gates for the second batch of roll signees.

Out of respect for the high tribunal, no one complained openly but everyone murmured and grumbled in their seats or while stretching their legs at shaded corners of the quadrangle.

It was like taking a 10-hour flight from Manila to another country in an oven, without an air conditioner.

A Maranao family of three had to wait at least 10 hours before the new lawyer in the family could sign the roll. By the time he did, he and his parents looked haggard after hours of sweating.

By 3 pm, a man, who found the heat unbearable, took his Barong Tagalog off. He walked across the quadrangle in a white sleeveless undershirt, exposing his flab, and was unmindful of the security officers who no longer enforced the formal attire rule.

Some women, who came with their picture-perfect makeup hours earlier, ended up with shiny faces – whatever they put on their faces became greasepaint.

“We have been waiting here since 10:30 in the morning,” complained Rene, a man in a Polo Barong who was waiting for his daughter’s number to be called. “This should have been a simple process but it looks like they made it complicated.”

It rained briefly in the afternoon but it wasn’t enough to cool everyone and wet the concrete floor of the quadrangle.

About an hour later, the winds blew off the giant blue tarp that provided shade, sending many of the new lawyers and their guests off their seats and running for cover. Luckily, the tarp was blown off to one side, got entangled in braces, and didn’t fall off. No one was hurt.

Inside an air-conditioned waiting room where several guests were let in around 6 pm, an SC employee came to announce that after hours of turtle-paced movement or seeming inactivity, they were finally speeding up the process.

The queue started on the pedestrian lane outside the old SC Centennial Building where the new lawyers – each entitled to bring only two guests – waited to get in so they could be given COVID-19 rapid antigen tests.

Once inside, no one already tested gets out, transforming the SC quadrangle into a massive quarantine station.

There, they waited for hours just for the new lawyers to pay the admission and other fees. Many waited until evening to accomplish this.

Once cleared, the new lawyers and their guests proceeded to the main SC building where the signing of the Roll of Attorneys took place.

But before that, the new lawyers had to line up again to pay for the COVID-19 rapid antigen tests given earlier, Bar admission, lawyers’ ID and certification fees, and the submission of clearances while their companions waited in the lobby for a few more hours.

There was another queue after the roll signing so that the new lawyers could register as members of the Integrated Bar of the Philippines (IBP).

Not all of the country’s 8,241 new lawyers have to sign the Roll of Attorneys at the SC though. Those who flocked to the SC were the ones who received notices.

On May 3, assistant Bar confidant Amor Entilla announced that the roll signings would also take place on separate dates this month, and June in Cebu for new lawyers in the Visayas, and Cagayan de Oro for those in Mindanao.

For those in the Visayas, the signing is scheduled from May 30 to June 3 at the IBP Building on Escario Street in Cebu.

The new lawyers in Mindanao can sign the Roll of Attorneys at the Hall of Justice in Cagayan de Oro from May 26 to May 28.

For those in the National Capital Region, Luzon, and others who were already notified, the roll signing at the SC will be held until May 24, except on election day, and again from June 6 to June 17. – Rappler.com

Disclosure: The author was a guest at the Supreme Court during the May 5 signing of the Roll of Attorneys.