‘The next big thing’: Dubai to enjoy culinary wonders from Philippines Facebook Twitter Copy URL
Copied
‘Even my boss who is a local is now familiar with Filipino food,’ says Ricardo Bojador, a Filipino executive chef in Dubai

Picture this: An Arab man indulging himself in a bowl of kare-kare with manakeesh on the side; or an Indian national, so used to having curries as a staple, trying adobo, probably curried, too; or a British enjoying bubble milk tea for the usual afternoon break?

The possibilities are limitless as the Filipino community here rolls out two months of foodie galore, showcasing homegrown Filipino comfort foods with a gourmet twist to make these kitchen specialties ready for an international audience of over 250 nationalities, all of whom have brought foods they have grown up back home to share as well.

The food festival will highlight this year’s celebration of the Philippine Independence Day festivities. It will be participated in by at least 12 Filipino-operated restaurants to showcase culinary wonders as the city steadily moves on to full recovery while much of the world grapples with the pandemic.

Consul General Paul Raymund Cortes said the inaugural event, the first of its kind in the UAE in more than a decade, “reflects the partnership between the consulate, the business community, and the rest of the overseas Filipinos to spread awareness of Philippine flavors and Filipino cuisine for other ethnicities to enjoy.”

“This is also a tool for our Filipino restaurants to generate interest among the other ethnicities in this part of the world and thereby create a deeper understanding of who we are as a people,” he told Rappler.

In his prepared Independence Day speech, the diplomat, head of the Philippine missions in Dubai and its five neighboring northern emirates, highlighted the need for the consulate to continue “working in tandem with the Filipino diaspora to identify how else they can move their wants, dreams, and visions forward” in the light of pandemic recovery efforts.

“Each step we take towards fruitful collaboration, whether baby steps or humble strides, is a step towards the betterment of all,” he added, citing the food festival as one such move.

To officially kick off the much-anticipated event, officers of the Filipino restaurateurs’ group, League of Food and Beverage Entrepreneurs (LFBE), will have their oath-taking at the Philippine Consulate on Saturday, June 12. During this event, the campaign dubbed “PINASarap sa UAE Food Tour” will be officially announced, paving the way for the involved restaurants to start buckling down to work.

The campaign, which will officially take place from July 1 to August 31, will be highlighted by a “dining passport” that will be given to customers by the participating restaurants and stamped as they dine in.

“PINASarap” is a portmanteau of the Filipino words, “Pilipinas,” the vernacular equivalent of Philippines; and “sarap,” which means flavorful in English.

To bring the event to the next level, an exclusive dinner will also be held on July 27 that will feature a curated Filipino menu for invited heads of diplomatic missions, UAE businesses, and representatives from other business groups. An afternoon tea party will also be held on the same day.

At least 60 high-level individuals have been invited for the event.

Organizers said this will provide an opportunity for Dubai’s food and beverage industry stakeholders to network and explore possibilities for collaboration as the city’s hotel and restaurant businesses recover from months of closure during last year’s quarantine measures.

And so apt it is, organizers said, noting that Dubai is a melting pot of a multitude of different cuisines and restaurants with award-winning chefs busy in the kitchens taking orders from people of varying gastronomic tastes and taking the extra mile to keep them coming back.

As Uwe Micheel, president of the Emirates Culinary Guild (ECG), an association of about 3,000 chefs in Dubai, puts it: “Dubai really is now a culinary city.”

He said Dubai has become home to celebrated chefs, adding that the city had “very little in terms of food and beverage” when he arrived in January of 1993.

“But now, I think Dubai can compete with all the culinary cities in the world. When I came here, we went to Hong Kong… to Singapore to learn, to see what was going on in the culinary world.

“These days, the chefs from Hong Kong, from New York are coming to see what we are doing here because now you can find every concept, every cuisine in the world in Dubai,” said Uwe, also Director of Kitchens at Radisson Blu Hotel Dubai Deira Creek.

He said that among the finest are Filipinos working silently amid the banging of pots and pans in restaurant kitchens. 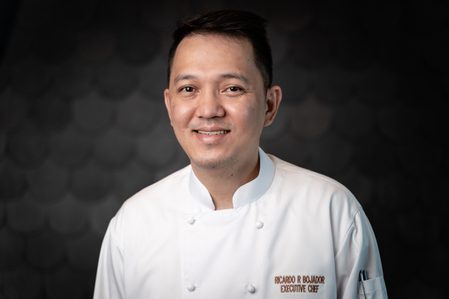 “Marami na kami, sa hotel man ‘yan or restaurant. Kahit saan akong mapunta na kitchen hindi nawawala ang Pinoy staff (There are now many of us, whether in hotels or restaurants. In all kitchens I visit, there is always a Filipino staff),” Bojador said.

Meantime, the “passport,” once fully stamped by the 12 participating Filipino restaurants, can be entered into the raffle draw for a chance to win prizes topped by round-trip tickets to the Philippines, said Gina Valbuena, LFBE chair and owner of Kubyertos Cuisine.

She further explained: “All 12 official members will issue these ‘dining passports’ to interested customers – Filipinos and other foreign nationals – who can then qualify for the raffle draw by having their ‘passports’ completely stamped.”

Valbuena said completed passports may be submitted to any of the LFBE members. The raffle draw will be held on September 3, she said.  Other than the round-trip plane tickets to the Philippines, Valbuena said other prizes include  packages from project partners as well as vouchers from LFBE restaurants and enterprises.

And to as well highlight the Philippines’ participation to Expo 2020 happening from October 20 this year to April 10 next year, Valbuena said participating restaurants have been required to create a special nook in their premises promoting the country’s involvement in the world fair.

“PINASarap sa UAE Food Tour” will once again put to fore the role of overseas Filipino workers (OFWs), approximately half a million of them in Dubai, as “culinary ambassadors.”

Over time, Filipino food has been introduced and enjoyed in the city by other nationals wanting to try something new in the same vein as Filipinos have grown accustomed to Arabic, Indian, Japanese, Chinese, and Thai food, among others, themselves experimenting with their pots and stoves on weekends.

Boosting this are the Filipino restaurants numbering close to 50 in Dubai alone, not to mention the “carinderias” and “turo-turos” that abound inside hypermarts, with trays upon trays of food ranging from balbakua, a Cebuano dish, to dinuguan and dinengdeng (an Ilocano staple); menudo to rilyenong bangus – mostly by the Kapampangans of Central Luzon.

There are also Filipinos who have cross-married with other nationals and introduced Filipino food to their spouses’ family.

“Against the backdrop of the 123rd Anniversary of the Proclamation of Philippine Independence dawning upon the hundreds of thousands of Filipinos in the UAE, one wonders if the pandemic has provided our community a greater momentum for consulate-community engagement and if so, what it means for the future of our diaspora in this part of the world,” Cortes said.

He stressed: “The tandem of consulate leadership and diaspora-led endeavors springs forth avenues that motivate our overseas Filipino community to aspire for greater heights and in providing a stronger voice for our unique identity.

“Truly, as we think about these challenging times and our sense as a nation, it is more apparent that the essence of our independence lies in the delicate balance between government’s dependence on what our people desire and the common good.”

Other LFBE officers are Rolly Brucales, vice chairman who also operates Off The Hook Seafood Restaurant, which has nine branches across UAE; Divina Jimenez, secretary and owner of Joy Bubble Tea that she and her husband opened at the height of last year’s pandemic and has now grown to have another branch; Cristine Galang, treasurer and general manager of Zutto Suki Japanese Restaurant; Albert Opena the group’s membership director who also operates Ounce DXB, Ounce isa leading events, mobile bar solution and brand activation specialist  in the UAE.

All are excited about the rollout.

“This group will do its best to elevate the quality of our food to other nationalities… to put the uniqueness of our cuisine on the spotlight,” said Brucales.

“Abangan na lang ang aming mga projects (Just watch out for our projects) in the future,” she said.

Jimenez added: “As of now under discussion pa ang offer naming package but will surelybe  bubble tea + food to share with family and friends at an affordable price of Dhs 50.”

The LFBE is under the arm of the Philippine Business Council-Dubai and Northern Emirates (PBC-DNE), the only Filipino organization licensed by the Dubai Chamber of Commerce & Industry and part of ASEAN Business Council Alliance (ABCA).