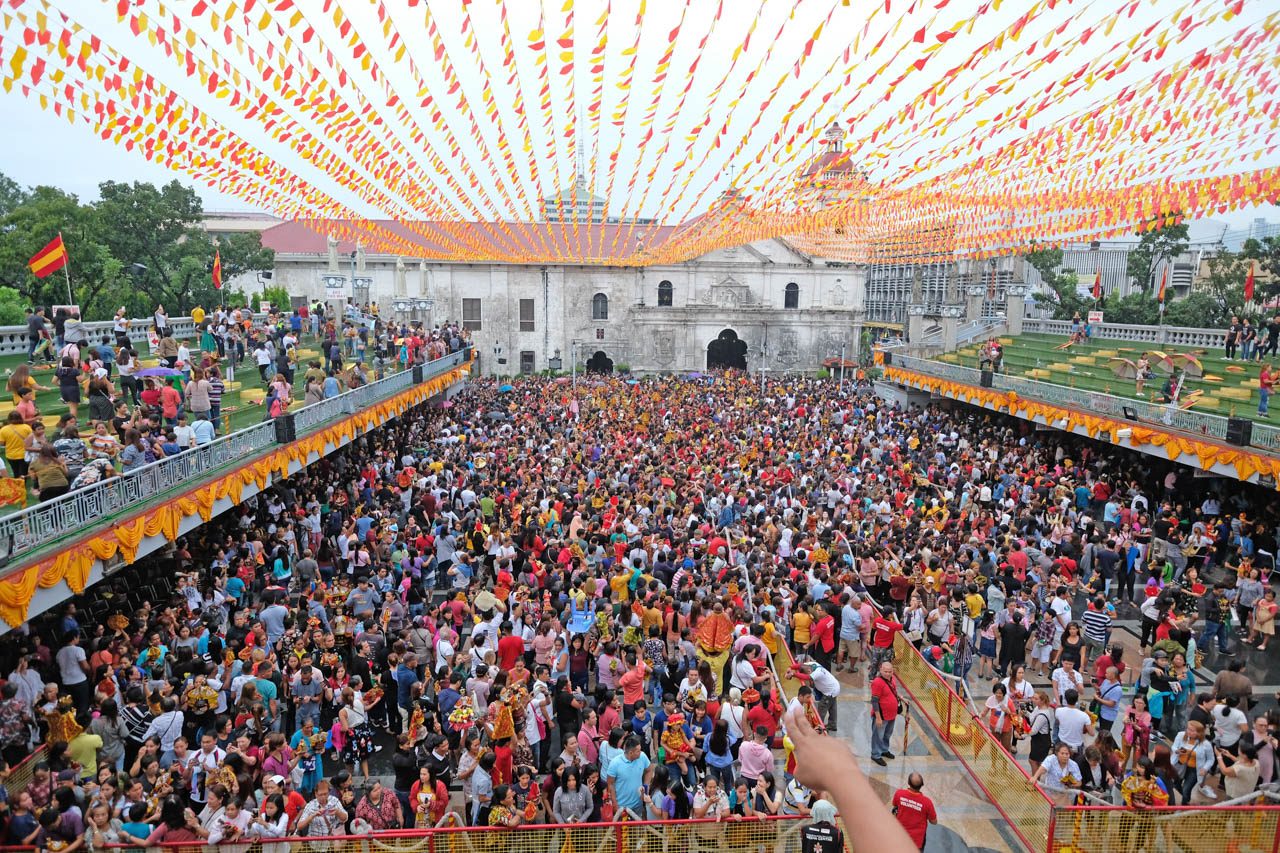 Facebook Twitter Copy URL
Copied
The Augustinian friars will hold online Masses as scheduled, but from another location to discourage devotees from gathering at the Basilica

No more in-person attendees will be allowed at Cebu City’s annual Fiesta Señor’s novena this year amid a spike in COVID-19 cases in the city, the Augustinian Friars of the Basilica Minore del Santo Niño de Cebu announced on Monday, January 11.

“We have decided to cancel all public Masses in the Basilica and continue to celebrate through virtual (or online) as scheduled starting January 12, 2021, the 5th Day of the Novena, until the Fiesta Señor, January 17, 2021,” the Augustinian Friars said in a statement released to the media.

Monday’s 6:30 pm Mass will be the last the Basilica will allow churchgoers to attend physically. The rest will be virtual until the Feast of the Santo Niño on Sunday, January 17.

“For four days, we have observed that the surge of people coming to venerate and celebrate the novena Masses has brought us into a conclusion that a greater action should be done to [protect] us from the virus,” the statement read.

“Having this situation in mind and moreover reminded by Christian morals that the utmost goal of the Church is to bring each and every Christian to an integral salvation, not only of the soul, but also for the body, which includes our health and well-being,” the priests added.

According to the Basilica’s Facebook page, at least 20,000 devotees were estimated to have come to the church on the first day of the Novena.

The friars said the live-streamed Masses will not be held in the Basilica’s pilgrim center to prevent anyone from trying to attend the celebrations.

The Basilica, however, will still be open to visitors at a limited capacity.

The cancellation of the physical Masses comes after the local government decided to cancel all physical activities of the Sinulog Festival, the cultural activities that usually happen simultaneously with the Fiesta Señor.

The week-long religious and cultural event usually draws millions of tourists to the city. While they attempted to make this year’s fiesta a hybrid, the local government and Church officials both decided it would be best to go completely virtual to not accelerate the already spiking cases in Cebu City. While no cases have been tracked to the fiesta’s novena Masses in particular, Cebu City’s Emergency Operations Center said during the same press conference that at least 4 of the current cases attended Mass during the period of infection.

Three of them attended the Misa de Gallo, while one attended a regular Mass physically while infectious.

Cebu City was once the “second epicenter” of the COVID-19 pandemic in the Philippines, but was praised when local efforts led to the flattening of the curve, quicker than most areas in the country. Across the Central Visayas, 95 new COVID-19 cases were reported, bringing the regional number of active cases to 1,207.

While health systems and isolation centers are still below the danger zone of 70%, the city is asking the public to continue to avoid going out unnecessarily, to practice physical distancing, wear masks, and wash or sanitize hands.