The Barangay Development Fund of the National Task Force to End Local Armed Conflict (NTF-ELCAC) amounting to P16.24 billion (around $321 million) was already released to at least 812 barangays, according to the Department of the Interior and Local Government (DILG).

The fund is part of the NTF-ELCAC and DILG’s Barangay Development Program (BDP), which seeks to give incentives to barangays supposedly cleared of communist terrorist groups. The BDP aims to target 822 barangays in the country. 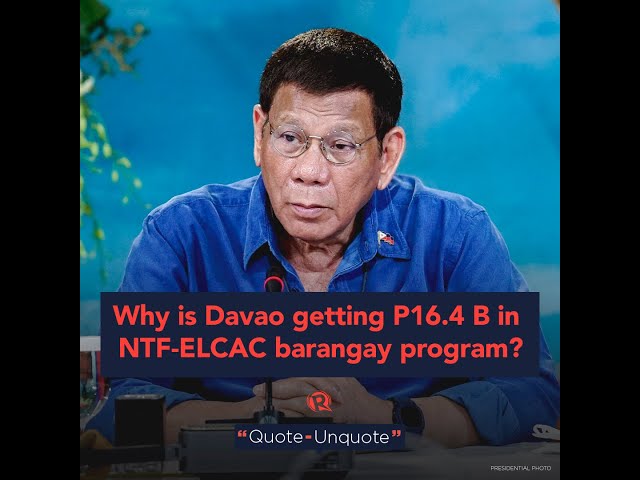 A total of P16.4 billion (around $324 million) was allocated by the national government for the said program. Since P16.24 billion was already distributed, this means that 99% of the total funds had already been released by the concerned agencies as of July 2021.

According to Interior Secretary Eduardo Año, the budget will finance 2,276 projects. The projects include 926 farm-to-market roads, 516 water and sanitation projects, 156 health stations, and 135 school buildings.

The breakdown of the P16.24-billion budget is as follows:

Both the Davao Region and Davao City, home of President Rodrigo Duterte and a number of his cabinet members, got a lion’s share of the billions.

Joining Davao in the regions receiving the biggest chunks of the budget are Western Visayas, Northern Mindanao, SOCCSKSARGEN, and Caraga.

These funds were earlier criticized by budget experts and some lawmakers as being akin to the pork barrel since it was the NTF-ELCAC that chose the barangay beneficiaries. – with reports from Rambo Talabong/ Rappler.com