Danny Lim: The West Pointer who rebelled against a system, then embraced it 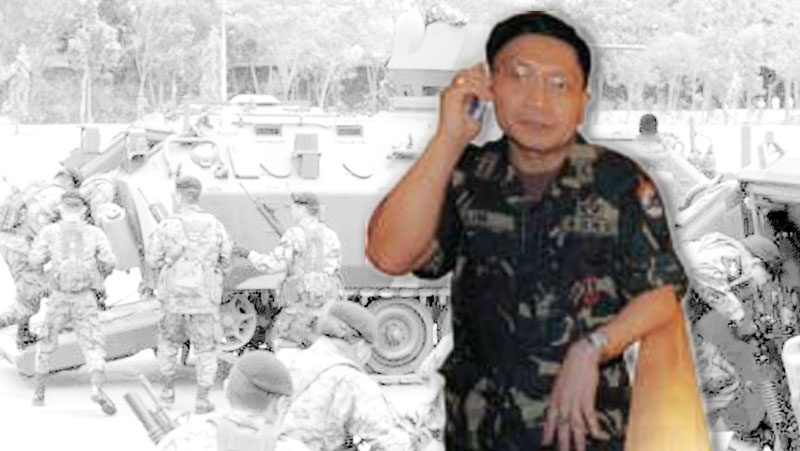 REBELLIOUS PAST. Danilo 'Danny' Lim during the turbulent years in the military. File photo by Newsbreak

This generation knows the late Danny Lim only as Metro Manila’s traffic chief, one of the retired generals appointed to a civilian post by President Rodrigo Duterte. He was much more than that.

From a family of bright kids in Solano, Nueva Vizcaya, Lim had always been ahead of the pack – whether in school or in the Armed Forces of the Philippines, which he joined in 1979 after finishing at the prestigious United States Military Academy at West Point. He spent his plebe year at the Philippine Military Academy, belonging to Class 1978, the power class under former president Gloria Macapagal-Arroyo who herself was their “adopted classmate.”

It was Arroyo who gave Lim his first star in 2003, when he was named commander of the elite Scout Rangers. Yet, he rebelled against her following allegations she cheated in the 2004 presidential elections and was mired in corrupt deals. Arroyo put him in jail after a botched coup in 2006. (Lim was also a Mason, like many generals close to Arroyo)

In the dying months of her regime in early 2010, a Makati court allowed Lim to post bail and the military granted him temporary liberty – which was to last. He ran for senator in 2010 under Liberal Party standard-bearer Benigno Aquino III. Lim lost, but he was later named deputy Customs commissioner by Aquino. He would resign for his failure to curb corruption in the bureau.

Lim quit hours after Aquino, in his July 2013 State of the Nation Address, slammed the Customs bureau for corruption. “If you hear something like that [from the President], what would you do?” Lim told Rappler then. He said he tried to resign 6 times in the 22 months that he was in office. Six times Executive Secretary Pacquito Ochoa Jr rejected it, he said.

“The expectation was simply too much,” Lim said. “I told Secretary Ochoa, please just give me another agency.”

Lim’s adventures and misadventures did not begin and end there.

Three years after the military led a revolt against dictator Ferdinand Marcos in 1986, the Reform the Armed Forces Movement continued to agitate young officers and soldiers, blasting then-President Cory Aquino for her alleged ties with communists. It did not take much effort to recruit Lim to the rebel movement; he was a young, idealistic captain who was frustrated with corruption and incompetence in government and who, as operations chief of the First Scout Ranger Regiment at the time, saw for himself how guerrillas were winning the hearts and minds of Filipinos.

Backed by mutinous Air Force pilots and infantry troops, the Rangers and Marines attacked military camps in Metro Manila and nearby provinces as well as Cebu, but were eventually overwhelmed by pro-government troops and the Americans’ fighter jets that did a flyby on Mrs Aquino’s request.

Lim and his comrades refused to give up as they moved to Plan B, which was to seize Makati’s financial district, occupying its ritzy hotels and prolonging the mutiny in what would be the Philippine military’s longest 9 days of rebellion.

While other officers escaped to go underground, Lim stayed with his fellow Rangers to surrender – in fashion. With heads high and firearms intact, they marched as they returned to their barracks in Fort Bonifacio.

They were eventually jailed. Lim and the other coup leaders were brought to the Camp Crame detention center until they were amnestied by retired general Fidel V Ramos, who became president in 1992.

It was in jail where I spent many hours asking Lim about the armed forces, what moved him to rebel against it and his government, what future he saw. Some of the questions on politics, he would answer me through long hand-written letters smuggled through contacts.

I was surprised by his responses, I told him, because it was too anti-American for someone who got educated at West Point. For centuries, Lim had written, the Americans have dominated our thoughts, our politics, our decisions. It was time for the Philippines to craft an independent foreign policy, he said, something that they would have implemented had they won the coup.

A Filipino with Chinese blood, Lim grew up in a middle-class family in Solano where he, his parents, and his siblings were known among villagers as the family with brilliant genes. They all graduated at the top of their classes and had become doctors, teachers, soldiers. It didn’t surprise their neighbors that in 1974, Lim would be accepted at West Point.

For this alone, a bright future awaited Lim in the Philippine armed forces. He joined the Scout Rangers, the elite unit that was trained to do surgical strikes against communist lairs in the mountainous towns and villages of mostly rural Philippines. They were a cut above the rest – disciplined, smart, brimming with idealism.

To make their surgical strikes effective, the Rangers isolated the rebels by mobilizing their own “masses,” sitting down with families and village leaders to listen to their daily woes, the lack of access roads to their homes, the absence of public clinics, the fact that their kids had to walk 6 miles, back and forth, to the nearest public school under the punishing sun.

In short, Lim repeated to me in jail, the Rangers were doing what the government should be doing, because it was constantly absent in the communities where they operated. No wonder the communists were winning the war. Lim said his and his troops’ exposure to the everyday reality in the war zone got them upset with local leaders and politicians. That was where the seeds of rebellion grew, he recalled.

It was not hard to persuade the soldiers that the system had to change, and if all that took was a coup, then so be it.

Many years later, when he had sobered up and we would chat about military rumblings here and there, the idealistic Lim had turned skeptical, almost cynical.

These presidents and politicians, he said one breakfast at the Shangri-La mall a decade ago, they think the military will forever be at their beck and call, that we soldiers don’t understand politics.

We know they’re just using us, so we use them too, he added. I’m done with them, he said.