PANDEMIC-HIT PH. Catholic faithful wear face shields as they queue along Carriedo Street to attend the scheduled Friday mass at Quiapo Church in Manila on June 18, 2021.

Facebook Twitter Copy URL
Copied
(1st UPDATE) Octa Research fellow Guido David says this can still be prevented if actions are taken now, since the country is still in the 'early stages' of local transmission of the Delta variant

An expert studying the coronavirus pandemic in the Philippines said that COVID-19 cases in the country may hit 10,000 per day again if the government will not impose stricter restrictions now.

Octa Research fellow Guido David said this in an interview with CNN Philippines’ The Source on Friday, July 23, noting that the projection is possible “within the next few weeks” if there is no immediate government intervention.

“It’s not set in stone [that] we hit 10,000. If we make actions, we can still prevent this, especially that we’re still in this early stages,” David said in a mix of English and Filipino.

In a report published on Friday, the Octa Research team said that the reproduction number (R) – the number one positive case can infect – in virus epicenter Metro Manila is now at 1.21, compared to 0.92 in the previous week.

Experts have said that the goal is to keep R below 1 to contain virus transmission until a COVID-19 vaccine becomes available. An R above 1 means that the virus is spreading faster.

Guido said that it was concerning that the Philippines already has local transmission of the more virulent Delta variant, which is ravaging Southeast Asia. “Local transmission seems imminent,” he said.

Citing the case of Metro Manila, David said that Octa saw a 39% growth rate in the capital region. “We’re averaging 850 cases per day in the NCR. Last week our average was only 613. So that’s one week growth rate of 39%,” he added.

David, however, that a surge in infections can still be prevented, especially if the transmission of the Delta variant is not yet widespread.

The Philippines now has 47 cases of the highly-transmissible COVID-19 Delta variant, but there are concerns that the actual number may be far higher, as the Philippine Genome Center only does random tests on COVID-19 cases.

The Department of Health said on Friday that 18 of the Delta variant cases were unvaccinated against COVID-19, two were fully vaccinated, while four received their first dose. The DOH is still verifying the vaccination status of the 23 other cases. It also didn’t provide the vaccine brand of the vaccinated cases. 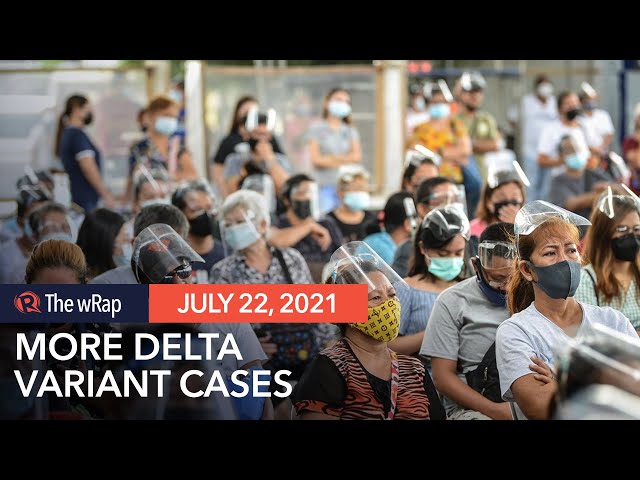 David said that they came up with the projection by mapping out the R in February, when the cases in the Philippines started to rise again prior to the cases surge in April.

“It’s comparable in February 13 to 19. This means that we saw the same increase in reproduction number as February 13 to 19, and that was when the surge was starting…. We’re saying this now because it doesn’t hurt to be cautious,” David said in partly Filipino.

As the highly-transmissible Delta variant sweeps through Southeast Asian countries like Indonesia and Thailand, the Philippines stepped up quarantine restrictions in areas where COVID-19 cases spiked.

The health department also advised the public to avoid “unnecessary travels and gatherings” and to get vaccinated against the deadly virus following the confirmation of the local transmission of the Delta variant in the country.

The Philippines is also doubling its preparations in case another surge hits the country. Health Undersecretary Maria Rosario Vergeire earlier said that the government was in talks with manufacturers so it could buy more oxygen tanks to further shore up its current “sufficient” supply.

Hospitals were also asked to increase their bed capacity for COVID-19 patients.

While COVID-19 daily cases in the Philippines have plateaued at around 5,000 to 6,000, this is still higher than the average daily cases before the cases surged last April.

That surge, which was driven by more infectious variants and the easing of mobility restrictions, crippled the Philippine healthcare system at the time. – Rappler.com