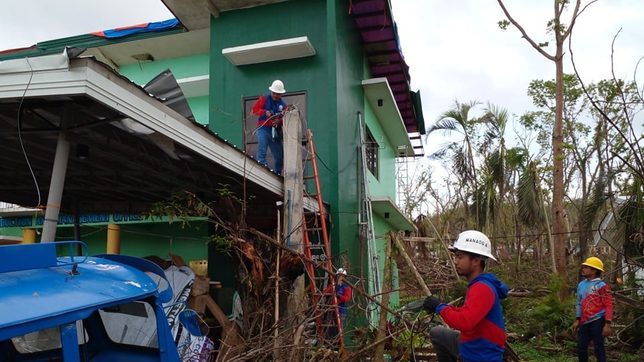 Facebook Twitter Copy URL
Copied
In three Visayas regions, 5.92 million persons or 1.67 million families in 6,509 barangays struggle in the aftermath of the typhoon

The Office of the Presidential Assistant for the Visayas on Tuesday, January 4, said that residents of three regions received more than 300,000 family food packs and cash aid since Typhoon Odette rampaged across the central Philippines on December 16 and the early hours of December 17, 2021.

In a status report, the OPAV said Typhoon Odette affected 5.92 million persons or 1.67 million families in the Visayas.

Odette hit a total of 6,509 barangays across three regions, according to OPAV, which had earlier listed under-served areas.

The OPAV report said 887,957 houses were damaged in three regions. For “totally damaged” houses, the office only had a figure for Central Visayas: 172,154.

OPAV gave a consolidated list of relief services delivered to the Visayas as of January 3.

It said 497 beneficiaries from 20 barangays in 4 cities and towns in Negros Oriental received P2,485,000 (P5,000 for each recipient) during President Rodrigo Duterte’s December 29 visit.

DTI Negros Oriental also distributed before the year end P1.120M worth of Bangon Negosyo Kits (P8,000 each) to 140 micro firms affected by Typhoon Odette, the OPAV said on January 3.

Visayan Electric is the second largest electric utility in the Philippines. It serves the cities of Cebu, Mandaue, Talisay, Naga and four municipalities of the greater part of Metro Cebu – Liloan, Consolacion, Minglanilla and San Fernando. Its website says the franchise service covers an area of about 674 km2 with an estimated population of 1.73 million.

On January 2, a 23-member crew from the Tarlac and Zambales electric cooperatives arrived in Negros Oriental to help bring back electricity to devastated areas, including upland barangays.

Heavy rains over the New Year’s weekend have caused landslides and closed roads, hampering relief and rehabilitation efforts in the Visayas. – Rappler.com