Facebook Twitter Copy URL
Copied
Saying only a few weeks ago that he will stand by his rule even if he is removed from office, Ombudsman Samuel Martires tells the lower chamber he is now open to revision

Ombudsman Samuel Martires is now open to revising his rule that restricted public access to the Statements of Assets, Liabilities and Net Worth (SALNs) in his custody, including the President’s and the Vice President’s.

Jalosjos, as the budget sponsor, was answering interpellations from other congressmen on behalf of the Office of the Ombudsman with consultation from the officials.

But Jalosjos’ statement came only after repeated pressing from ACT-Teachers Representative France Castro to revise what she called was a rule that “bastardized” Republic Act (RA) No. 6713 or Code of Conduct of Public Officials.

For much of the interpellation, Jalosjos repeated Martires’ stance that SALNs are weaponized against officials, saying there had been reports from field investigators that SALNs have been used for extortion and criminal activities.

Castro pointed out that RA 6713 says “any statement filed under this act shall be available to the public for a period of 10 years after receipt of the statement.” Castro said that the only limitation under RA 6713 is that the request and reproduction shall be done for a fee and within reasonable hours.

“The only restriction is reasonable hours and the fee. The memo circular bastardized the words of the law and reversed the meaning of some parts,” said Castro.

Still, it was an indication of openness to revise as compared to what Martires told the House of Representatives only a few weeks ago that he would stand by his circular “even if I am removed from office.”

“As long as you already have a request and suggestions, then we can start the process of review,” Jalosjos told Castro.

Memorandum Circular No. 1, passed by Martires in September 2020, restricted what were otherwise publicly accessible SALNs of these officials, including himself. Under this rule, one can get the SALNs only if the official consents to the release, if it’s a court order, or if it’s a government investigator requesting to aid an ongoing probe.

This has allowed President Rodrigo Duterte to keep his SALN a secret since 2018.

(Who would voluntarily open his SALN to a person who might be investigating him for possible graft and corruption? Effectively, SALNs have been hidden.)

“Memorandum Circular No. 1 has to be revoked or revised because this is unconstitutional,” said Castro.

The circular has so far survived a constitutional question before the Supreme Court, but that petition was denied largely on procedural grounds. But in that decision, the Supreme Court said, “A custodian [of SALN] is not prohibited by the Constitution to regulate such disclosure.”

This so-called regulation was what Jalosjos largely cited during the interpellations.

Martires has said that he would want to amend the Code of Conduct to include a provision that would criminalize commenting on one’s SALN. This has raised outcry because of its blow to free speech and press freedom.

Castro said on Friday that Martires had already submitted proposed amendments to the Code of Conduct, but it was not clear if the formal proposal indeed includes a criminal clause on commenting on SALNs. 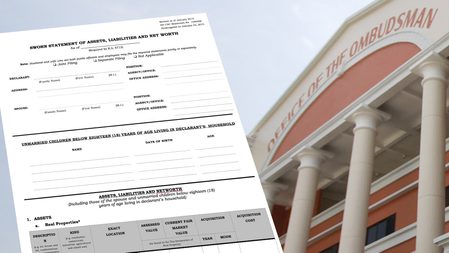