On Avaaz: Boycott call vs school that bans hijab 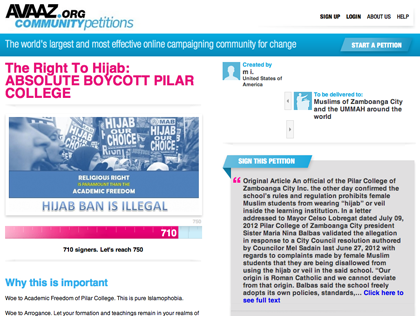 ZAMBOANGA CITY, Philippines - A group has launched an online campaign that calls for a boycott of a college in this city that bans female Muslim students from wearing their veils in school.

The campaign, called “The right to hijab: Absolute boycott Pilar College,” was launched on avazz.org, a global platform for civic action, days after Pilar College confirmed that it was imposing a ban on the use of Islamic veils in school premises.

Jhums Napii Estino, one of the key supporters of the campaign, called on other Muslims to support the cause. “Unless Pilar College retract its decision this issue will not be resolved. I urge everyone to sign the petition especially those parents who have children currently enrolled at Pilar College,” she said. Estino claimed that Pilar College has many Muslim students out of its population of more than 3,000.

As of Friday afternoon, August 4, the online petition had 87 likes on Facebook with some petitioners coming from India and Bahrain. More than 700 have signed the petition.

Laisa Masuhud-Alamia, regional director of the Commission on Human Rights of the Autonomous Region in Muslim Mindanao (ARMM), said that to ease the tension a dialogue between Pilar College and concerned Muslim groups is now being planned. “As much as possible we do not want this problem to escalate. A dialogue is seen to ease the tension between both sides,” she said.

Yaser Apion, National Commission on Muslim Filipinos (NCMF) chief of legal division for Western Mindanao, told Rappler that Pilar College has agreed to join the dialogue. But in a telephone interview, a school official did not confirm this and instead said that the school will issue an official statement on the issue.

In a consultation held Thursday afternoon, August 3, among various Muslim groups here, Apion told them that his office had already sent a letter to Pilar College president Sister Maria Nina C. Balbas seeking to revisit its school policy on the hijab.

The letter, dated July 27, was signed by NCMF acting regional director Dennison M. Abidin and cited various government-issued memoranda that support the use of Islamic veils in campuses. “The right to wear hijab is further strengthened by a recent law, Republic Act No. 9710, “The Magna Carta of Women” which at the same time render the duty-bearers answerable for the observance of these human rights,” the letter stated.

“We also understand that Pilar College is a sectarian Catholic school and that it has a right to adopt its own institutional policies as part of the exercise of its academic freedom. However, with all due respect, just like any other sectarian private school, it is not exempt from  complying with policies, rules and regulations of the Department of Education  and Commission on Higher Education (CHED),” the letter noted.

The education department issued Memorandum Order No. 53 in 2001 that states the following: "In the specific case of Muslim students, the following policies shall be adopted: a. Female Muslim schoolchildren should be allowed to use their veil or headdress (hijab) inside the school campus."

The NCMF said that once a private corporation seeks accreditation and registration with CHED and DepED as a regular school, the institution submits itself to the authority of these government agencies.

“I hope that Pilar College can reconsider its policy in view of these very clear legal mandates and institutional policy of the Department of Education,” NCMF Secretary Mehol K. Sadain said in a statement.

“Pilar College should realize that while educational institutions can formulate their own policies, the same should not run counter to existing laws and state policies. While Pilar College claims the exercise of academic freedom, such freedom must conform to law and the basic indices of justice and fair play, as well as the corresponding exercise by students of their equally constitutionally-enshrined right to religious freedom,” Sadain said.

In a July 9 letter to Mayor Celso Lobregat, Sister Maria Nina Balbas, president of Pilar College, said that the school has the right to impose such a policy, citing academic freedom which she said allows a private school to be organized according to the tenets of Freedom of Association. "This allows a school to  adopt its own policies, standards, regulations and set forth its conditions for those wishing to join this community as a student," she said. - Rappler.com