Opposition mounts against removal of ‘subversive’ books in libraries 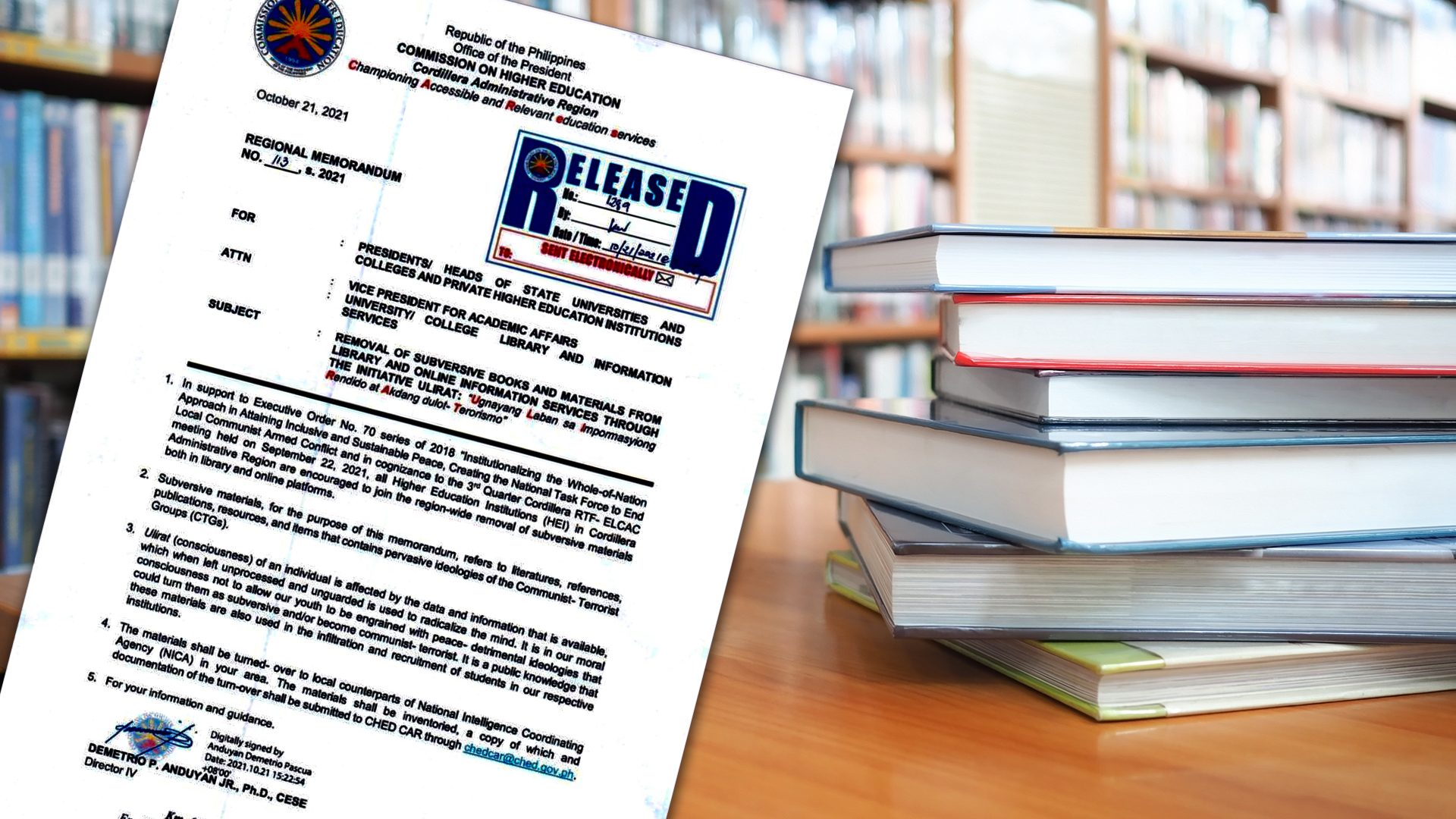 Facebook Twitter Copy URL
Copied
'Insurgencies are contained by addressing their root causes, not by banning books that explain how and why they happen,' says the University of the Philippines' University Library Council

Opposition on removing “subversive” materials from school libraries continues to mount, an issue ignited by the removal of peace talk references in university libraries and the recent Commission on Higher Education–Cordillera Administrative Region’s (CHED-CAR) memo.

On October 21, CHED-CAR issued a memo encouraging higher education institutions (HEIs) to remove “subversive materials” in their library and online platforms. After taking backlash, the office clarified that it merely informed the schools of things discussed in the anti-communist task force meeting.

The University of the Philippines Baguio is the latest institution to oppose the removal of “subversive materials” in their library and online platforms.

“Whether the memo was communicated to encourage or to inform us, we insist on registering our concern,” the UP Baguio’s University Council said.

UP Baguio’s highest policy-making body added that as an agency that oversees higher education institutions, CHED “should assist universities in the pursuit of unhampered discourse instead of undermining freedom and restraining the capacity to think and act.”

“As a university, UP Baguio is morally bound to guide its students towards an enlightened understanding of social dynamics. This responsibility can only be fulfilled by the promotion of critical thinking that allows students to ask boundless questions and make informed conclusions,” the statement said.

Earlier, the UP System-wide University Library Council also expressed opposition to removing “subversive” books and materials. They reiterated that the CHED-CAR memo hampers the flow of information for scholars’ pursuit of their studies, underscoring that they are “ethically bound to resist any form of political interference” that keeps scholars and students from accessing publications.

The group said that “insurgencies are contained by addressing their root causes, not by banning books that explain how and why they happen.”

The organization also called on their fellow librarians and university officials to protect libraries from censorship of any kind and resist actions that compromise academic freedom.

The Book Development Association of the Philippines echoed similar sentiments. They said the memo discourages critical thinking, which “will raise a future generation that is ignorant and subservient.”

“When we ban certain books, we teach our young to retreat to silence when they need to speak,” they said. “We push them to close their ears from fear when they need to listen, … [and] we let them grow blind to what they should see.”

The group added that Filipinos need to read books “grounded in the Filipino experience, … in its diversity and richness” if the goal was national progress. “We must become independent thinkers and discerning, judicious learners.”

Lawmakers have also stepped in on the controversy, calling for a probe on the purging of “subversive” books in libraries.

Senator Leila De Lima filed Senate Resolution No. 933 to investigate law enforcement agencies’ policies censuring book contents, which she considers “a direct and blatant attack on academic freedom enshrined in the 1987 Constitution of the Philippines.”

“These actions by the government’s anti-insurgency task force not only directly contravene the duty of the State to protect and promote the moral and intellectual well-being of the people, but actually run completely against the road to peace,” she added.

The Makabayan Bloc also asked the Committees on Human Rights and Higher and Technical Education in the lower house to launch a probe. The solons said the NTF-ELCAC “has no right to intrude, infringe or dictate upon the country’s state universities and libraries.”

On November 1, the Academics Unite for Democracy and Human Rights (ADHR), an alliance of Filipino teachers, researchers, school administrators, and other education professionals, launched the “Aswang sa Aklatan” (Aswang in the Library) website.

Aswangs are mythical creatures feared by many Filipinos. They are said to be ordinary persons during the day but feed on humans by night.

Dean Mary Grace Golfo-Barcelona of the UP Diliman School of Library and Information Studies said those who attack libraries and the free exchange of thoughts are the real aswang.

An online archive of “endangered books and materials” that includes peace talk documents, Martial Law references, and other books deemed “subversive” by the government is accessible on the website. It will also publish updates on the #HandsOffOurLibraries campaign.

The group earlier created an online petition against the government’s efforts to purge progressive books and materials from libraries. – Rappler.com