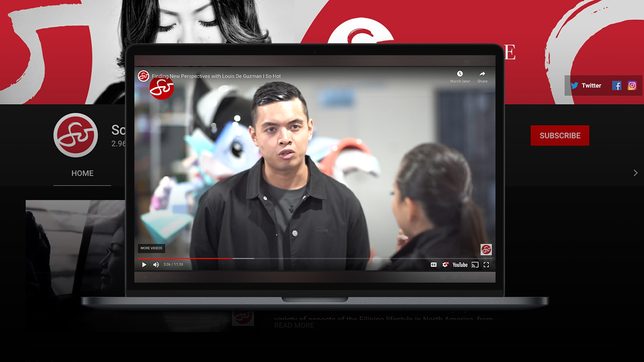 Facebook Twitter Copy URL
Copied
De Guzman takes pride in being able to represent Filipinos in the art scene. He finds inspiration in the sacrifices and struggles that his family had to make to give him the life he now enjoys.

Louis de Guzman has managed to stay grounded despite his growing success. The young Filipino American visual artist from Chicago has become the most en vogue artist today but hasn’t allowed the success to get to his head.

“It hasn’t sunk in because I don’t consider myself the hottest young Asian American or Filipino artist in America. There’s so many greats that have been paving the way for the longest time, I just happen to be part of the conversation,” said De Guzman in an exclusive interview with Filipino-American media pioneer Jannelle So Perkins in the latest installment of her weekly show, SoJannelleTV, which airs US-wide on cable channels The Filipino Channel (TFC) and ANC, as well as on local Southern CA digital channel KNET 25.5.

So Perkins and crew met with the highly celebrated artist at the opening of his ATOM VS. ASTRO exhibit, which featured sculptures and paintings of the iconic anime character Astro Boy. The exhibit, which ran from November 11 to 24, was featured at the BAIT store in Los Angeles.

De Guzman said he could trace his love for art to his childhood. He would help his mother with her arts and crafts projects and help her sell them at her booth at craft shows. Even as a child, De Guzman took note of the fact that his mother was the only Filipina among this crowd.

Instead of discouraging his love for the arts, his family gave their blessing for him to pursue his passion. His father had been in a band as a young man and gave him sage advice, which he has followed to this day.

“Do what you love,” De Guzman remembered his father telling him.

“My mom has always been the same way, they never questioned my direction in life, as long as I was being a good kid and responsible. It was more so like, ‘Hey, keep a straight head on your shoulder, do what you love, as long as you do it with pure, genuine heart and soul.'”

That advice has led to him creating many different pieces featuring abstract renderings of pop culture figures, including SpongeBob SquarePants, Bart Simpson, and others. He is also partnering with the shoe brand New Balance in an upcoming project and is in talks to do an exhibit in London as well.

De Guzman takes pride in being able to represent Filipinos in the art scene. He finds inspiration in the sacrifices and struggles that his family had to make to give him the life he now enjoys.

“As Filipinos, doing things in the art field like, dance, music, expression, it’s exciting. That’s where my Filipino-ness comes from, the pride, Filipinos have a lot of pride,” said De Guzman, who added that for him, success is measured not in the dollar amount that his creations fetch, but in the joy that his work inspires among collectors and admirers.

“I get excited about things because I know that this is the thing that I’m meant to be doing. And when I create, it feels good knowing that whatever I’m making can hopefully give that same energy off to people by just looking at something,” said De Guzman.

“I’ve had people message me or email me and just like, ‘Hey, I like your work.’ It makes me happy.” – Jannelle So Productions | Rappler.com

Check out SoJannelleTV daily for stories that make you pause, reflect, and appreciate who we are and what we are as a people.