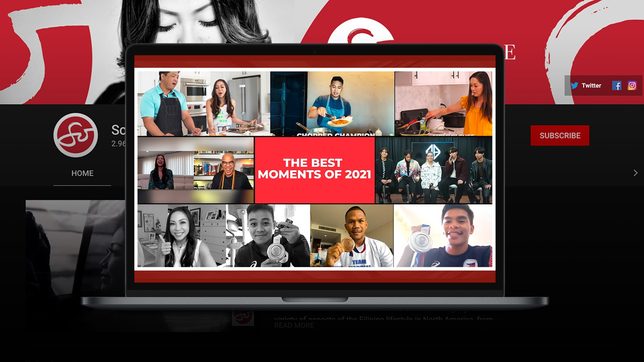 The fourth year of So Jannelle brought many highlights, as Filipino-American storyteller Jannelle So shared the diverse perspectives of Filipinos making waves abroad.

There was the breakout of Filipino boy band SB19, who dropped by the show after becoming the first Filipino artists to be nominated at the Billboard Music Awards. There were numerous standouts in the culinary field, who opened their cookbooks to share some cooking experiences with viewers. And then there was the interview with “The King of Talk,” Boy Abunda, who turned the microphone around and interviewed So Perkins on her own show. One cannot speak about Filipinos succeeding abroad in 2021 without mentioning the Philippines’ historic performance at the Tokyo Olympics.

SB19, which had reached the number 1 spot on the Hot Trending Songs charts with their hit “Bazinga,” was nominated for the Top Social Artist of 2021.

“We were like ‘Oh my God,’” Pablo recalled when he heard the news. “It was an overwhelming experience, makes us cry. Feels like it’s our biggest achievement.”

The five-member group was relaxed and introspective in their conversation with So Perkins, who shared questions from fans. One of the questions she asked was how they react to criticism that they are trying to ride on the K-pop wave.

“My mom says don’t get affected by what people say because we know ourselves better,” said Stell.

From the dance stage to the kitchen, So Perkins got to spend some time talking food with a number of Filipino-American chefs who have brought their talents to reality shows.

Lorenzo Beronilla, a New York-based actor, flew in to Los Angeles to meet with So Perkins after starring in the popular Epicurious series spin-off Pro Chef vs. Home Cook. Though he is not a professionally-trained chef, he has made an impact on the world of food, starring in a popular Jollibee commercial and releasing his cook book, Let’s Do This Folks: Home Cooking with Lorenzo.

Beronilla shared what he does when he couldn’t find Filipino ingredients abroad.

“Work with what you have,” advised Beronilla, after mixing lemons and limes to mimic the Philippine citrus fruit calamansi. “Because if you have the main things, onion, tomato, garlic, that’s Pinoy. You’ve got the right ABCs already.”

Chef Denevin Miranda cashed in on his exposure in the Food Network show Chopped, bringing home the $10,000 grand prize in the Meat Fight competition. He said he knew he would win when it was revealed that the episode would be pork-themed.

“I thought I had it in the bag at that moment because, Filipinos and pork, it’s definitely our animal,” Miranda told So Perkins.

Many of the stories So Perkins shared had to do with the struggles of Filipinos amid the pandemic. For Daniel Corpuz, the pandemic was a time of starting over and blossoming professionally.

After losing his restaurant job, Corpuz began making and marketing his own line of chocolates. His products became popular, landing him a spot on the Netflix series School of Chocolate.

Corpuz shared his tips to building a successful business.

“For anyone starting a business, the first thing you need to remember is to find a product that people will want. Once you have that, then you can start thinking about, what are your costs, how much time are you putting into this, and from there you can flesh out your concept even more,” he said.

Boy Abunda stopped by the So Jannelle show to help celebrate her fourth year on the air on August 29, helping to shine the spotlight brighter on the stories that So Perkins has been elevating. So Perkins intimated that her goal was to tell the stories that needed to be told.

“These are the stories that won’t necessarily make it to mainstream but we need to know about,” said So Perkins.

She said that sharing the Filipino spirit and lessons from immigrant experiences, are what she enjoys highlighting.

“With these stories I want to share the message that we are a great people but we also need to support each other,” said So Perkins.

So Perkins also spoke with a number of the athletes who represented the Philippines at the Olympics. The athletes had much to overcome, given that the Games were postponed for a year due to the pandemic. But that did nothing to dim the shine of the athletes, who returned home with a historic first gold, two silvers, and a bronze – the Philippines’ single largest Olympic medal haul so far.

The show looks to continue sharing the Filipino spirit of achievement and resilience for years to come. – Jannelle So Productions | Rappler.com