The legacy of Filipino performers in theater is a rich one, with iconic roles and ballads being portrayed and sung by Filipinos. If the recent successes of young Filipino performers like Van Ferro and Isabella Dawis are any indication, that legacy is in good hands for the future.

The two artists recently sat down with Filipino-American media pioneer Jannelle So Perkins for a segment on her So Jannelle TV show to discuss their recent successes. Ferro, who was born in the Philippines and is now based in Chicago, recently made headlines after winning two awards (Best Supporting Performer in a Streaming Musical and Best Supporting Performer in a Play) from the BroadwayWorld Chicago Awards. Dawis, who was raised in Minneapolis, Minnesota, recently won the Fred Ebb Award, which awards a $60,000 prize to up-and-coming theater songwriters, alongside her collaborator Tidtaya Sinutoke. 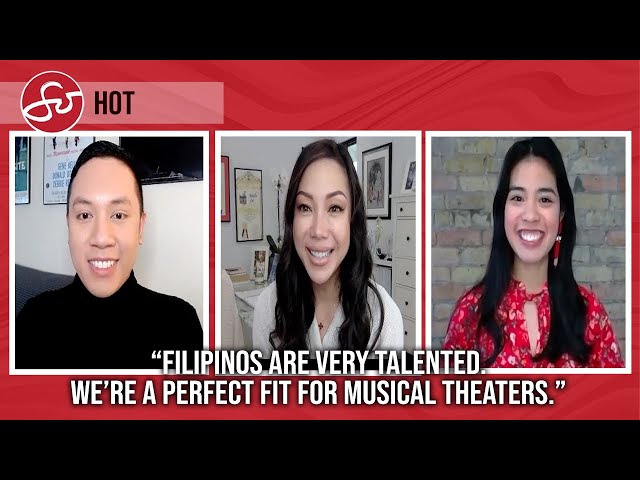 In addition, Dawis also won the Kleban Prize for Musical Theatre for most promising musical theater librettist. That award comes with a $100,000 cash prize, and the ceremony will be streamed virtually via Broadway On Demand from February 21 to 28.

Ferro, who immigrated from the Philippines a week after graduating high school, picked up theater after a friend left him a copy of Gone With The Wind. He joined his college’s theater group, then progressed to community theater and acting classes. His credits include Rip Van Winkle and Shipwrecked, for which he won his recent awards.

Dawis has been involved in theater from a young age, beginning as an actress and singer at age 9. The local theater scene was a vibrant learning experience for Dawis. When she began writing plays of her own, she brought with her a desire to create characters who reminded her of her own Asian-American experience.

“Definitely as a Filipina-American writer, one of my goals is to globalize American storytelling. Of course, we’re a nation of immigrants, but we don’t always fully recognize that as we should. I want to create characters…whose identities inform the way that they experience the world,” said Dawis, whose parents were born and raised in the Philippines.

One of her musicals, Half the Sky, is centered around an Asian-American woman who is dealing with difficult challenges in her relationships with her mother and sister, which she said gets to the heart of some of the generational differences among Asian and Asian-American women.

For Ferro, his Filipino roots directly influence how he approaches all of his characters.

“It is pretty competitive. Everyone is good, but you have to have that little bit of an edge. So I think for me as a Filipino, I’m kind of sharing a different perspective when it comes to creating a character or experiences because I’m not taking it from a caucasian perspective,” said Ferro, who had grown up wanting to be a diplomat.

“I think that’s what gives my characters a different flavor. Something different from what people would normally see in theater.”

The two closed by offering advice to others who want to follow in their footsteps onstage.

“If you want to get into acting, make sure that you treat it not only as an artistic endeavor, but also as a business,” said Ferro.

“Find the people who are doing the work that you admire. Your work isn’t just about yourself, it’s also about who you’re working with. That magic is going to be created with these wonderful other people,” said Dawis. – Jannelle So Productions | Rappler.com

Rappler is partnering with Jannelle So Productions Inc, founded by Filipino-American pioneer and Los Angeles-based journalist Jannelle So, to publish video and written stories from SoJannelleTV about the journeys, successes, and challenges of Filipinos living in America.