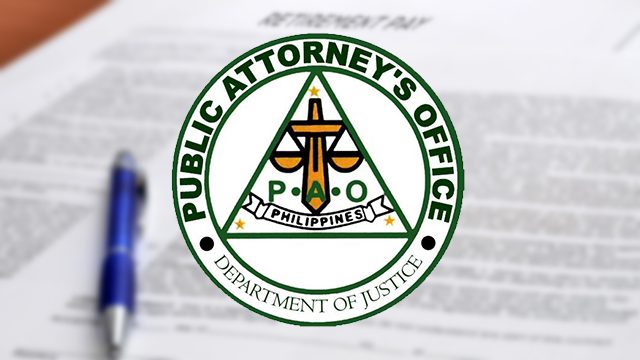 State auditors hit the Public Attorneys’ Office (PAO) for P10 million worth of lease contracts because of lack of pertinent documents.

In its 2019 audit report released by the Commission on Audit (COA) recently, PAO is shown to have entered into 44 lease contracts for its regional offices worth a total of P10.85 million.

“Our review of the 44 contracts of lease totalling ₱10,847,260.00 revealed that pertinent documents were not attached to the contracts which should form an integral part thereof,” said COA.

Among the missing documents for 5 contracts worth P701,017 are bid abstracts, bid proposals, and notices of award.

In its reply to COA, the PAO said it will require its regional officers to comply with the requirements. (READ: IN NUMBERS: Public Attorney’s Office under Acosta)

For the bulk of the contracts, or 39 contracts of lease worth P10.3 million, audits said there were no cost-benefit and market analyses, which are required by the procurement law’s internal rules.

“(Cost-benefit analysis) provides that by comparing the rental rates charged by its lessors against the prevailing rates in the area, (PAO) may analyze whether entering into a new contract will be more expensive taking into consideration the cost of transfer and accessibility to the public,” said the auditors.

PAO has 17 regional and 340 district/sub-district offices. Local government units (LGUs) shall provide free office space to PAO if it’s financially capable. Otherwise, PAO can enter into a contract of lease with the private sector.

Auditors also found that for 11 contracts worth P3.14 million, PAO entered into a multi-year agreement without securing the approval of the Department of Budget and Management (DBM). A 2019 DBM circular requires prior approval for multi-year projects.

Auditors have recommended that Chief Public Attorney Persida Accosta secure the approval from DBM “before entering into a multi-year contracts; otherwise, rescind the contracts of lease where the terms exceed one year.” – Rappler.com