President Rodrigo Roa Duterte talks to the people after holding a meeting with key government officials at the Malacañan Palace on May 23, 2022. Presidential Photo 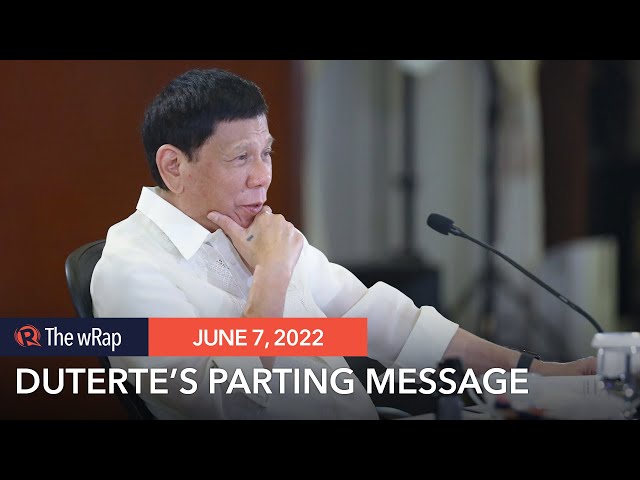 MANILA, Philippines – In a “parting message” three weeks before his term ends, Philippine President Rodrigo Duterte called on Filipinos to rally behind president-elect Ferdinand Marcos Jr. and other newly-elected leaders. But in the same message, he said there was no room for criticism of the incoming administration, which he conflated with “politicking.”

“We must all be united in confronting the issues ahead of us. We have no room for politicking or actions that are divisive to the country. Nagsalita na ang tao, may mga lider tayo (The people have spoken, we have leaders),” he said in an evening meeting on Monday, June 6, with pandemic task force officials in Davao City.

He read out what he called a parting message since the meeting would likely be his last “Talk to the People” address. Officials present even wore matching white t-shirts with the message “Salamat PRRD” printed on it.

Duterte, whose daughter Sara Duterte was elected with Marcos as the new vice president, said the new government needs the cooperation of all Filipinos.

“We must give it to him. That is democracy, that is how we operate,” said the outgoing chief executive.

But Duterte’s remarks appear to equate criticism of the administration, a democratic right, with actions meant to impede government – a dangerous correlation that has been used during his presidency to vilify critics, media, or groups with legitimate grievances the authorities should address.

In democracies, free speech is protected as a way to ensure citizens would be able to comment publicly on how they are governed.

Duterte, in his Monday address, said he never listened to groups who criticized him or his government, saying they were never satisfied with anything he did anyway. He implied these groups were associated with the opposition.

“Itong ayaw lang matalo at anuman ang gawin mo, gawain mo ito, masama ka, gawin mo ‘yon, masama ka rin (Those who didn’t like losing and whatever you did, you were wrong). So the better policy is just to ignore them and that’s what we did,” said Duterte.

“We never bothered to even hear what they were uttering or complaining about,” he added.

Duterte also took the opportunity to push for the continuation of two major policies of his administration – his controversial anti-illegal drugs campaign and the anti-communist task force (National Task Force to End Local Communist Armed Conflict or NTF-ELCAC).

He appealed to the Philippine National Police to maintain their “fervor” and “momentum” in running after drug syndicates.

“Do not be afraid to confront this evil called shabu,” said Duterte whose drug war has killed around 6,200 based on government records, though human rights groups say the number is closer to 30,000 if drug-related extrajudicial killings are taken into consideration.

Duterte described the NTF-ELCAC as a “very good” initiative that helped reduce the number of armed communist rebels by cracking down on their operations and incentivizing those rebels who surrender to the government with housing and livelihood assistance.

“I would think that if [NTF-ELCAC] is continued, give it another two years, [communists] would be wiped out,” said Duterte in a mix of Filipino and English.

While NTF-ELCAC has channeled millions of pesos worth of projects to hundreds of barangays, it has been controversial for rampant and often baseless red-tagging by its officials and spokespersons.

Ready to hand over reins

Towards the end of his public address, the President turned his attention to the work of transitioning to the Marcos administration.

He said he was “ready and eager to hand over the reins of government” to Marcos and gave assurances the transition would be a smooth one.

Afterwards, he said he would retire from politics and reside in his hometown of Davao City. But that doesn’t mean the public will no longer hear from him.

“If there’s a compelling need for me to talk, I will do it. But my drift is just to retire quietly, no more politics for me,” said Duterte.

His top “advocacy,” he said, would be the fight against illegal drugs and the need to “protect the next generation.”

Duterte will cease to be Philippine President at the stroke of noon on June 30, the day Marcos takes his oath as the next chief executive. – Rappler.com