The Filipino woman whose community pantry in April inspired thousands of countrymen to start their own food bank projects took to social media to condemn the threats to her life.

(I’m thinking about the death threats and rape threats against me this morning morning. I’m also thinking about how I can finally contact Food Panda because every night, someone is still ordering under my name.)

She acknowledged that the red-baiting against her has not stopped, nearly a month since she halted her pantry operations for a day after being subjected to red-tagging. 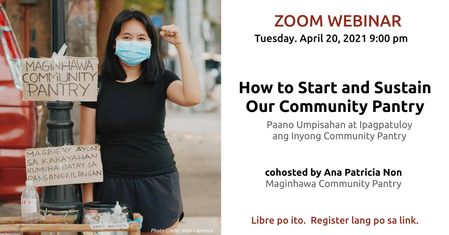 Non said she still feared for her safety. She said she decided not to leave her home on Monday, May 10, because of this.

“Hindi ko alam kung worth it ba lumabas para sa photo ops pero kapalit iyong safety ko (I don’t know if it’s worth it to go out for a photo opportunity but at the risk of my safety),” she said.

Non started her community pantry on April 14, saying she wanted to fill the gaps in the government’s COVID-19 response.

At the time, Metro Manila was under strict lockdown, but Filipinos who couldn’t go to work had to make do with the meager cash assistance from the national government.

However, as hundreds of community pantries emerged across the country, state forces immediately accused them of having ties to communists, with one high-ranking military official even likening the rapid spread of food banks to the work of Satan.

Some pantries were forced to cease operations amid fears of police profiling.

Non, who has defied harassment time and again, is taking some time off to prepare for the one-month anniversary celebration of the pantry that “exemplied the bayanihan (cooperation) spirit,” in the words of the same government that subjected her to red-baiting.

Not used to the spotlight, Non said she will decline interview and photo op requests in the coming days for her own welfare.

(I would like to remind the public that I’m just an ordinary citizen, sometimes jologs, sometimes jejemon. Not a politician, not a celebrity. Let’s just focus on helping community pantry beneficiaries.) – Rappler.com