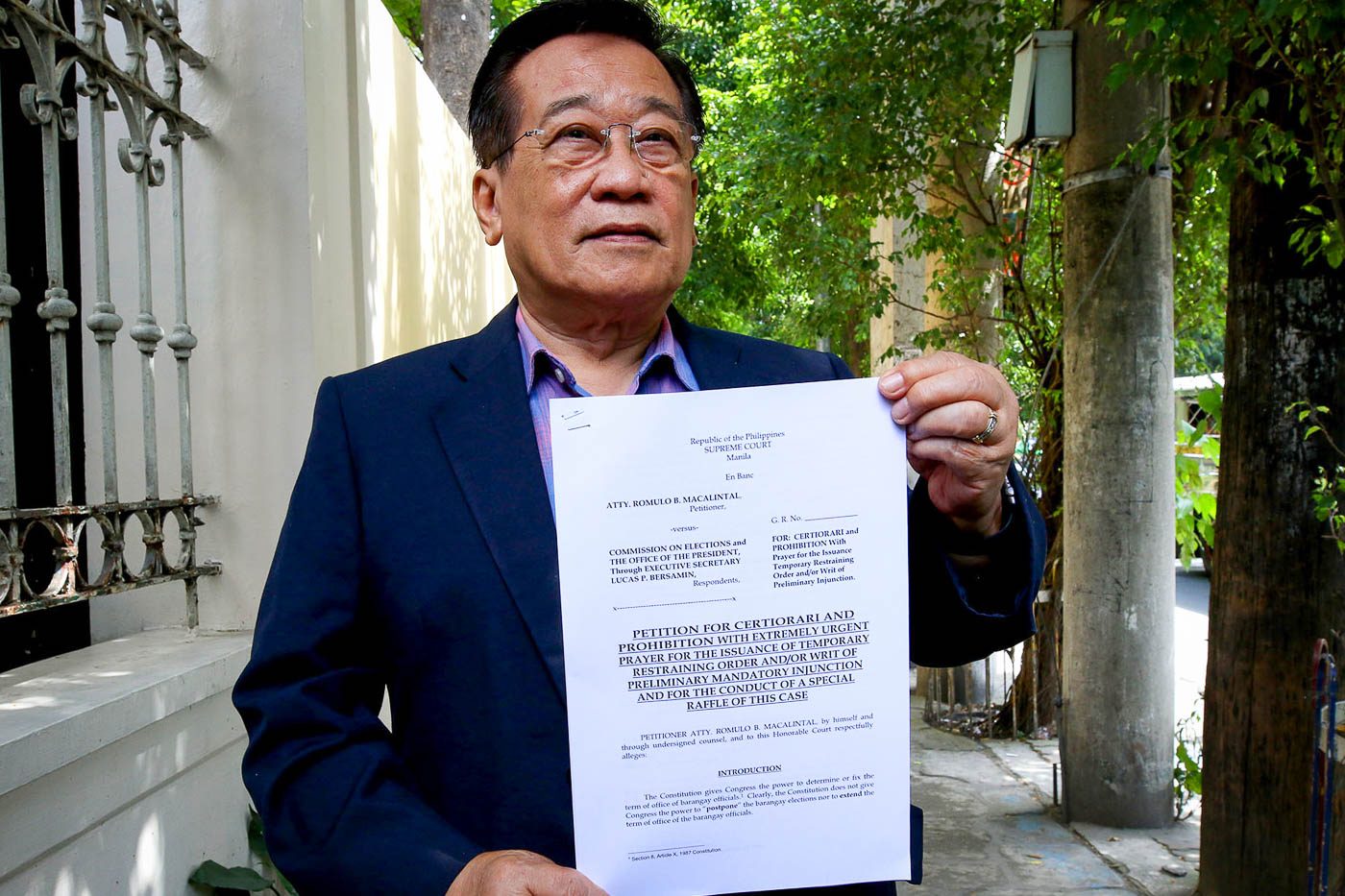 NOT CONGRESS' BUSINESS? Election lawyer Romulo Macalintal files a petition with the Supreme Court ON on October 17, 2022, to question the law postponing the scheduled barangay and SK polls. Rappler

Facebook Twitter Copy URL
Copied
Lawyer Romulo Macalintal says only the Comelec, not Congress, has the authority to postpone the village and youth elections

MANILA, Philippines – Veteran election lawyer Romulo Macalintal went to the Supreme Court on Monday, October 17, to challenge the constitutionality of the law that postponed the December 2022 Barangay and Sangguniang Kabataan (SK) elections to October 2023.

In his 27-page petition, Macalintal argued Congress “overstepped” its boundaries when it passed Republic Act 11935, which was signed by President Ferdinand Marcos Jr. on October 10.

Macalintal said Congress does not have the power to postpone the barangay polls nor extend the term of office of barangay officials.

He said only the Commission on Elections (Comelec) has the authority to do so, as provided by Section 5 of the Omnibus Election Code (OEC).

“Thus, by enacting a law postponing a scheduled barangay elections, Congress is in effect executing said provision of the OEC or has overstepped its constitutional boundaries and assumed a function that is reserved to Comelec,” Macalintal said.

He also said RA 11935 deprives Filipino voters of their right to choose their barangay and SK officials and “imposes upon or compels the electorate to accept their barangay leaders, whether the latter like it or not, for an extended period, beyond the three-year term for which they were elected.”

This is the fourth time in six years that the barangay and SK polls are postponed. Barangay and youth council officials are supposed to serve only three-year terms under the 1987 Constitution.

But when former president Rodrigo Duterte rose to power, he signed a law delaying the October 2016 barangay and SK polls by one year. He then signed another law in October 2017 to postpone the elections to October 2018.

The barangay and SK polls pushed through in 2018, and officials are supposed to end their term by May 2020. But Duterte once again signed another law delaying the May 2020 barangay and SK officials to December 2022 instead.

Marcos signing RA 11935 marks the fourth time since the local polls have been delayed since 2016.

Legislators, a majority of whom are allied with Marcos, said the postponement would allow the government to use the elections’ P8.4-billion budget to fund pandemic recovery programs. It would also supposedly give the country time to “heal” following the divisive 2022 national elections, which Marcos won by a landslide.

Comelec, however, said delaying the polls again would incur another P10 billion worth of additional expenses.