Lincon Ong and Mohit Dargani, officials of Pharmally Pharmaceutical Corp., were released from Pasay City Jail on June 2, 2022. According to the lawyer of the Pharmally execs, his clients should have been released from prison in February. Rappler 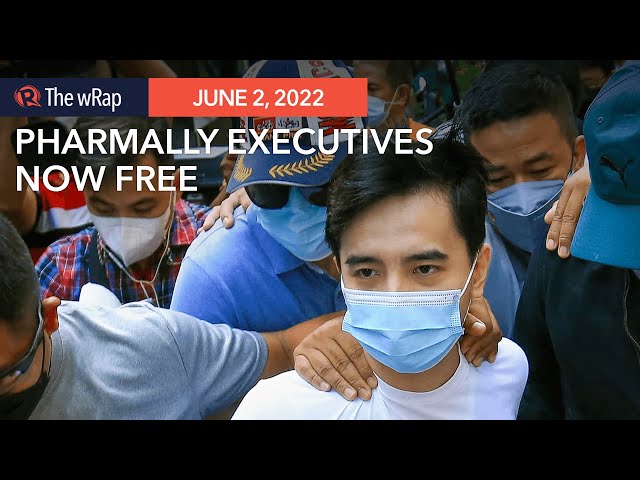 MANILA, Philippines – After spending the past six months incarcerated at the Pasay City Jail, two executives of the controversial Pharmally Pharmaceutical Corporation are now free men.

Pharmally corporate secretary and treasurer Mohit Dargani, and director Linconn Ong were released from their prison cells on Thursday, June 2, a day after the Senate adjourned session for the final time under the 18th Congress.

Senate President Vicente Sotto III signed two separate release orders for Dargani and Ong, who were earlier cited in contempt by the blue ribbon committee for refusing to cooperate in its investigation on the anomalies hounding the multibillion-peso pandemic contracts forged by President Rodrigo Duterte’s government with Pharmally.

The Pharmally executives were welcomed by their lawyer Ferdinand Topacio, who once again reiterated the firm’s threat to sue opposition Senator Risa Hontiveros for allegedly coercing resource persons during the hearings to testify against Pharmally.

Hontiveros has already denied this and said she can present proof countering Topacio’s claims.

“May resibo kaming nagpapatunay na wala kaming kinoerce na saksi. Wala kaming pinilit na kahit sinuman (We have receipts proving that we did not coerce any of the witnesses. We did not force anyone to testify),” said Hontiveros in a statement.

Ong, Dargani, and his sister Twinkle, who is Pharmally president, were cited in contempt and arrested by the blue ribbon panel last year over their evasive answers during the probe and for failing to present documents on Pharmally’s financial dealings with the government.

The Darganis have also been under Senate custody ever since they were caught trying to flee the Philippines via a foiled getaway flight from Davao City to Malaysia. Davao City is the home turf of Duterte.

Dargani and Ong were sent to the Pasay City Jail in November 2021 after they failed to give the exact location of the allegedly missing financial documents of their company.

Twinkle, meanwhile, was allowed to stay under Senate custody due to her mental health. She was later released in January 2022 due to humanitarian reasons, after she got infected with the coronavirus and her mental health condition worsened.

No action on draft report

The Senate blue ribbon committee hearings, led by its chairman Senator Richard Gordon, uncovered that Pharmally cornered P10 billion in pandemic deals between 2020 and 2021 despite it being a small, newly created firm that lacked the funds, track record, and credibility to handle big-ticket government procurement.

A Rappler investigation also revealed that Chinese businessman Michael Yang, a friend and former economic adviser of te President, has links to Pharmally through a network of companies that thrived during Duterte’s term. Pharmally officials said Yang was their financier and guarantor, although he denied this.

The draft committee report prepared by Gordon recommended the filing of criminal cases against the Yang, the Darganis, Ong, and other officials and executives embroiled in the scandal.

The draft report also recommended the filing of cases against Duterte once his term ends for failing to go after those responsible for the Pharmally mess.

But the Senate adjourned session on Wednesday without taking any formal actions on the draft committee report. Only nine blue ribbon committee members signed the report. Gordon needed at least 11 to be able to sponsor the report for plenary action.

Several committee members said they begged off from signing since they disagree with the recommendation involving the outgoing president. Gordon, however, took a jab at his colleagues for refusing to take a stand in what is considered to be the biggest corruption scandal to rock the Duterte government.

Leading the Pharmally investigation later proved to be fatal to Gordon’s political career. He made himself an enemy of Duterte himself, who spent the past months attacking the veteran senator. Gordon failed to win his reelection bid in the May 2022 elections. – Rappler.com