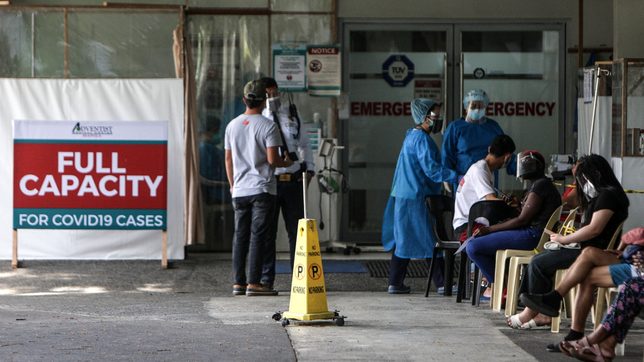 DEADLY PANDEMIC. A sign indicating that the COVID-19 facility of the Advestist Medical Center in Manila is at full capacity on Tuesday, March 30, as the country recently logged an all time high of 10,016 new cases.

The Philippine Hospital Association (PHA) said healthcare facilities are under “severe financial distress” as the state health insurer has so far failed to fully reimburse them for millions worth of coronavirus treatments since March 2020.

During a Senate hearing on industries badly hit by the pandemic on Wednesday, May 19, PHA president Dr. Jaime Almora listed the Philippine Health Insurance Corporation’s (PhilHealth) unsettled debts on COVID-19 reimbursements as among the biggest challenges faced today by both public and private hospitals.

Almora said PhilHealth – which is facing multiple allegations of corruption – was allegedly prioritizing the reimbursements for the expenses of non-COVID-19 patients over those who were infected with the virus.

“That is the biggest problem because we are not given a reason why. This is now causing severe financial distress for private hospitals as well as the government hospitals,” said Almora.

Senator Imee Marcos, who chairs the Senate committee on economic affairs, then asked Almora around how much exactly PhilHealth owes hospitals.

While the PHA president cannot give a full amount during the hearing, he said PhilHealth has P1.2 billion worth of unpaid debts to one hospital alone.

This is not surprising. The Private Hospital Association of the Philippines earlier said PhilHealth has unsettled debts to its member hospitals amounting to P6 billion worth of claims

This has forced them to reduce manpower and other resources amid the surge in COVID-19 infections in the country.

Almora said PHA officials already met last April 5 with PhilHealth president and chief executive officer Dante Gierran, whom the doctor described to be “sympathetic and accommodating” of their appeal. Gierran had promised PhilHealth would pay its debts to member-hospitals of PHA.

PhilHealth has since approved the application of a Debit-Credit Payment Method (DCPM) to help settle the unpaid COVID-19 reimbursements for hospitals. But Almora says some hospitals were surprised over this set-up.

“However, the hospitals were surprised why they have to apply, why they have to sign an undertaking. It is like a borrower cannot pay and [he is] asking the one lending the money to be the one to do the undertaking… So maraming hospital, nagulat sila, so ‘di sila nag-apply,” Almora said.

He said some hospitals did avail of the DCPM, only to receive a meager amount of payment from PhilHealth.

Almora also alleged that while Gierran may be sincere in paying PhilHealth’s debts to hospitals, the state health insurer’s regional offices are the one “withholding” the payments.

Senator Francis Pangilinan said it is “totally unacceptable” for PhilHealth to leave its debts unpaid.

“At this point, it’s like they’re saying they don’t care about you and you should deal with it. You are the frontliners and yet this is happening… This is totally unacceptable,” said Pangilinan in a mix of English and Filipino.

Marcos said PhilHealth officials will be invited to succeeding hearings to explain their non-payment of the COVID-19 reimbursements for hospitals.

In a statement on Friday, May 21, PhilHealth said that it has “sufficient funds to fulfill its obligations.”

“Being a public fund, safeguards are in place based on accounting and auditing rules and regulations prior to disbursements. For 2021, as of May 17, 2021, PhilHealth paid a total of P25.38-billion in claims, P4.88 billion of which are for COVID-19 related claims,” the state health insurer said.

PhilHealth said that it has paid almost P6 billion to 182 hospitals under the DCPM method.

President Rodrigo Duterte already ordered PhilHealth to speed up payments of its unsettled claims to hospitals.

A year into the pandemic, the Duterte government is still struggling to contain the spread of COVID-19. As of Tuesday, May 18, total infections are now at 1,154,388, with the death toll at 19,372 people. – with a report from Bonz Magsambol/Rappler.com