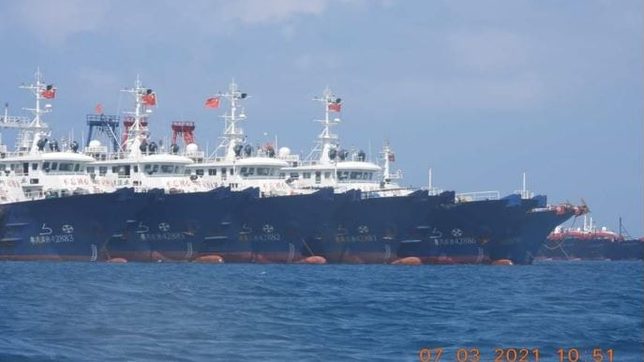 Facebook Twitter Copy URL
Copied
'It demonstrates nothing more but bad faith in the ongoing negotiations for the proper conduct in these waters,' the PMA Alumni Association and the PMA Retirees Association say in a joint statement

Alumni of the Philippine Military Academy (PMA) rallied behind Defense Secretary Delfin Lorenzana as they slammed the continued presence of Chinese ships at Julian Felipe Reef as a display of China’s “hypocrisy” and “bad faith.”

“This illegal encroachment, coupled with the persistent unlawful acts perpetrated by the Chinese over the years in these territorial disputes only further show the hypocrisy by which the latter have conducted themselves. It demonstrates nothing more but bad faith in the ongoing negotiations for the proper conduct in these waters,” said alumni of the Philippines’ premier military academy.

Philippine officials verified the presence of 220 Chinese ships at Julian Felipe Reef on March 7, but the Chinese embassy in Manila claimed that these were merely fishing vessels taking shelter in the reef because of bad weather conditions.

On Saturday, April 4, Lorenzana said the ships should leave immediately since there was no reason for them to remain, sparking a rare word war with China.

Lorenzana is among the PMA graduates in the Duterte cabinet. The President himself has yet to release any statement over the latest Chinese incursion, though his spokesperson, Harry Roque, had said that Duterte supports his defense chief’s position.

“That the acts of the Chinese Embassy in downplaying the issue and subverting the truth are very alarming indeed. The weather conditions in the West Philippine Sea have been fair in the past few days and to claim that the vessels still cannot leave due to rough seas and inclement weather is a blatant lie, hence deplorable,” the PMA alumni said.

Collin Koh Swee Lean, a naval affairs expert from the Institute of Defence and Strategic Studies based in Nanyang Technological University in Singapore, said that these latest developments and assertions of China in the disputed waters should be challenged. (READ: Why we shouldn’t be complacent about Chinese vessels in Julian Felipe Reef) – Rappler.com