PH senators still proud of Pacquiao: ‘He is and will always be the People’s Champ’ Facebook Twitter Copy URL
Copied
(1st UPDATE) The fight isn't over yet, Filipino senators tell their colleague Manny Pacquiao, who is rumored to be eyeing the presidency in 2022

Filipino senators were quick to issue statements and tweet encouraging words for Pacquiao just minutes after his unanimous decision loss to Ugas at the T-Mobile Arena in Las Vegas, United States was announced on Saturday, August 21 (Sunday, August 22, Manila time).

“He is still my champion! He made the Filipino proud!” Sotto told reporters.

Senator Panfilo Lacson – who could become one of Pacquiao’s potential political opponents if the latter runs for Philippine president in 2022 – also praised Pacquiao for bringing “unprecedented honor” to the country.

“Manny Pacquiao is and will always be the People’s Champ who has brought unprecedented honor to our country. I don’t think there will be another boxer in the world who can equal his feat. At least not in 100 years,” said Lacson.

“That, plus his big heart for the poor and the downtrodden. On both counts, he is the champion we always love and admire,” he added.

Senator Majority Leader Juan Miguel Zubiri said he is proud of Pacquiao both as a senator and a Filipino.

“Senator Manny Pacquiao may not have brought home this title, but he has once again proved himself a legendary fighter – the best athlete we have ever had, and the world has ever seen,” said Zubiri.

Fighting for the first time in more than two years, Pacquiao failed to reclaim the World Boxing Association super welterweight belt from Ugas, who earned the nod of the judges with a score of 115-113, 116-112, 116-112.

It’s a costly defeat for Pacquiao, who is believed to be eyeing the Philippine presidency in the high-stakes 2022 elections that would elect Rodrigo Duterte’s successor.

Pacquiao had been acting president of PDP-Laban, but a civil war among factions in the party eventually saw him and his ally, Senator Aquilino “Koko” Pimentel III, being stripped of their posts as party officers.

The party had, however, also released a statement of support after the fight, saying: “We share with the nation the pain as we witnessed the loss of our boxing champ, Manny Pacquiao to his Cuban opponent, Yordenis Ugas. He fought a good fight.”

Pacquiao also made himself an enemy of Duterte when the boxing champion turned senator lamented corruption in government.

Pacquiao first dabbled in politics by running for congressman of Sarangani province in 2010, serving two terms until 2016. He then ran and won for senator in 2016. 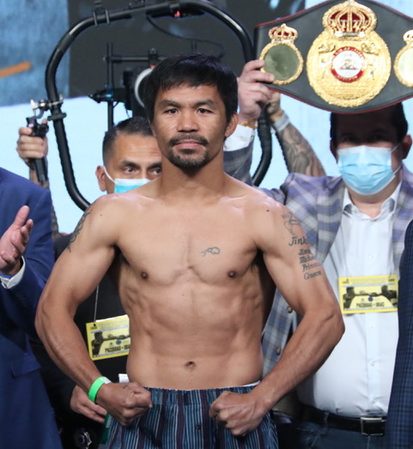 ‘Fight isn’t over yet’

Despite Pacquiao’s defeat in the boxing ring, his ally Pimentel still congratulated him for his gallant effort against Ugas.

(Congratulations still to our People’s Champ, our national treasure, Senator Manny Pacquiao, for a gallant competitive world championship fight. He showed the world the bravery and excellence of the Filipino’s heart in sports, which can be applied in other aspects of life.)

Senator Sonny Angara also said Pacquiao should not be ashamed because “he gave it his all; Ugas fought a smart fight.”

For Senator Nancy Binay, a champion like Pacquiao is not defined by his wins but how he overcomes setbacks.

In an interview right after his match against Ugas, Pacquiao said he will be making an announcement about his rumored presidential run by September.

The filing of candidacies for the 2022 Philippine elections will be in October. – Rappler.com