Facebook Twitter Copy URL
Copied
Instead of a negative swab test result, travelers are now allowed to show a negative result from an antigen test done by a healthcare professional 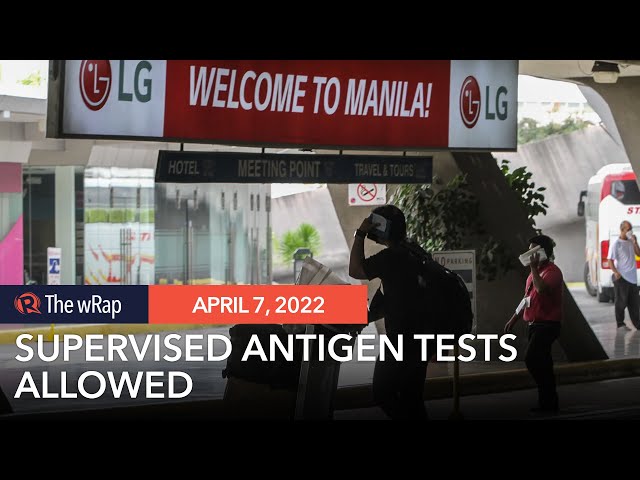 MANILA, Philippines – The Philippine Inter-Agency Task Force (IATF) said Thursday, April 7, a negative result from a healthcare professional-supervised antigen test is now allowed as part of the entry requirements for travelers coming into the country.

On Thursday, April 7, Presidential Spokesperson Martin Andanar said that the IATF allowed the use of a rapid antigen test on Wednesday night, April 6.

According to Andanar, it is permitted “as long as they are administered and certified by a healthcare professional in a healthcare facility, laboratory, clinic, pharmacy, or other similar establishments from the country of origin of the traveler.”

Before this announcement, the standing requirement for inbound fully vaccinated travelers is a negative result from a swab test taken 48 hours before departure.

The quarantine mandate had also been dropped by the Philippine government in February, in a bid to spur tourism.

Andanar added that the vaccine certificates of Bangladesh, Mexico, Panama, and the Slovak Republic are now being recognized by the Philippines.

The Philippines reopened its borders to tourists, regardless of nationality, on Friday, April 1. Immigration requirements still apply to travelers from non-visa-free countries. – Rappler.com