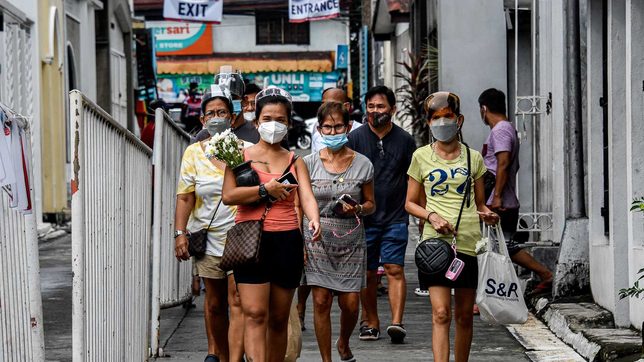 PANDEMIC-HIT PH. People visit their departed loved ones at the San Juan Cemetery on October 23, 2021, ahead of the All Saints Day and All Souls Day as ll cemeteries will be closed on October 29 to November 2 to minimize COVID-19 transmission.

After the record-breaking surge in infections driven by the highly-transmissible Delta variant, the Philippines is now “low-risk” for COVID-19, the Department of Health (DOH) said on Monday, October 25.

“Nationally, we are at low-risk case classification with a negative two-week growth rate at -48%, and a moderate-risk average daily attack rate at 5.89 cases per every 100,000 individuals,” Health Undersecretary Maria Rosario Vergeire told reporters in a press briefing.

Vergeire added that healthcare utilization is now at moderate risk.

“Decline in cases is seen at the national level and in most regions. Majority of provinces in CAR (Cordillera Administrative Region), Regions 1, 2, 4B, and 9 remain at moderate risk classification, with beds and/or ICU rates at high to critical risk,” Vergeire said.

On October 20, the Philippines logged 3,656 new COVID-19 cases, the lowest single-day fresh infections tallied in over three months. This drop was part of a downward trend since the surge driven by the highly-transmissible Delta variant sent the numbers skyrocketing in September.

Despite the decline in cases, Vergeire urged the public to continue following the minimum public health protocols.

(The fight isn’t over yet. We cannot be complacent at this time. We can go out be we should be careful.)

On September 11, the Philippines saw its highest COVID-19 tally since the pandemic began at 26,303. – Rappler.com