The Philippines has fired a new diplomatic protest demanding China’s withdrawal from the vicinity of Pag-asa Island.

The Department of Foreign Affairs said in a statement on Saturday, May 29, that it filed the protest on Friday, May 28.

“The Department of Foreign Affairs lodged a diplomatic protest yesterday against the incessant deployment, prolonged presence, and illegal activities of Chinese maritime assets and fishing vessels in the vicinity of the Pag-asa islands, demanding that China withdraw these vessels,” the DFA said.

“The Pag-asa Islands is an integral part of the Philippines over which it has sovereignty and jurisdiction,” it added.

The swarming of Chinese vessels in the West Philippine Sea has been adding pressure to President Rodrigo Duterte to be more assertive against the regional giant, including invoking the Hague 2016 ruling that invalidates China’s historical claim to Philippine waters.

Duterte had previously said that he would visit Pag-asa – a highly symbolic move that would send a strong message to China and other claimants that the Philippines is serious about defending its sovereignty – but had yet to do so. Defense Secretary Delfin Lorenzana explained in an interview in 2020 that Duterte didn’t want to “hurt the feelings” of a “friend” like China.

Newsbreak Chats: Duterte’s China policy is setting the Philippines up for failure 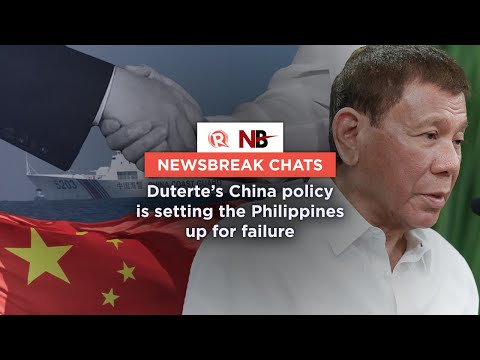