WHITE SHIP. This China Coast Guard ship was photographed near Scarborough Shoal. Local fishermen say at least 4 of these white ships guard the shoal at any given time. Photo sourced by Rappler

Facebook Twitter Copy URL
Copied
(UPDATED) 'While enacting law is a sovereign prerogative, this one – given the area involved or for that matter the open South China Sea – is a verbal threat of war to any country that defies the law,' says Foreign Secretary Teodoro Locsin Jr 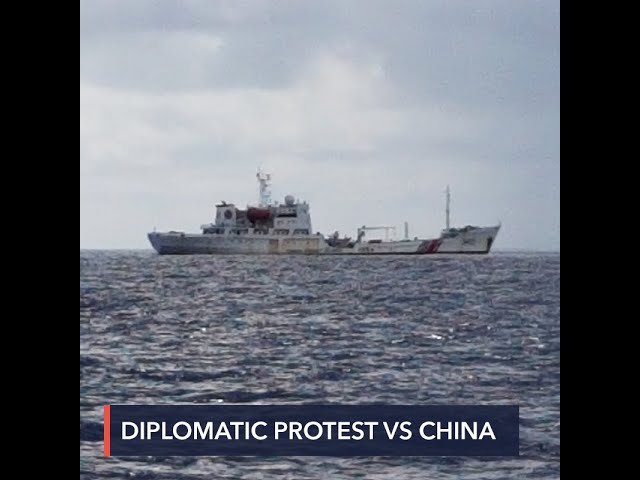 The Philippines has filed a diplomatic protest against China over a newly passed law that allows its coast guard to fire on foreign vessels, Foreign Secretary Teodoro Locsin Jr said on Wednesday, January 27.

“After reflection, I filed a diplomatic protest,” Locsin tweeted on Wednesday.

Locsin announced the development two days after initially saying China’s passage of the new law was “none of our business.”

The foreign affairs chief said deeper reflection on the issue led him to the view that the law could be seen as a “verbal threat of war” to countries that defied it, considering it involved contested waters in the highly volatile South China Sea.

“While enacting law is a sovereign prerogative, this one – given the area involved or for that matter the open South China Sea – is a verbal threat of war to any country that defies the law; which, if unchallenged, is submission to it,” Locsin said.

Earlier published draft versions of the bill showed China authorizing its coast guard to use “all necessary means” to stop or prevent threats from foreign vessels. It also allowed the boarding and inspection of foreign vessels in “waters claimed by China.”

The controversial law was passed less than a week after Chinese Foreign Minister Wang Yi’s two-day official visit to Manila, where he had bilateral discussions with Locsin and paid a courtesy call on President Rodrigo Duterte. At the time, Locsin said Wang’s visit demonstrated “strong and manifold ties that bind the Philippines and China.”

Chinese foreign ministry spokeswoman Hua Chunying earlier addressed concerns on the law, arguing that it was in line with international practices. South China Sea analysts said while the law may be consistent with international norms, questions over how China will implement it was a main point of concern.

China is known to deploy its coast guard in disputed waters as a way to assert its sweeping claims in the South China Sea, including the West Philippine Sea.

Chinese coast guard personnel have also been known to unlawfully block and confiscate devices of Filipino fishermen accessing Scarborough Shoal, a common fishing ground as declared by the 2016 Hague ruling.

Maritime law expert Jay Batongbacal earlier said that the Philippines and other Southeast Asian countries should send a clear message that despite new law, China cannot use force to assert its claims on other countries’ waters.  – with reports from Reuters/Rappler.com