TOP DIPLOMAT. Foreign Affairs Secretary Enrique Manalo meets with the media at the Rizal Park Hotel in Manila on August 16, 2022.

MANILA, Philippines – Philippine Foreign Secretary Enrique Manalo suggested that talks on oil and gas activities with China, a possibility first opened by the Duterte administration, could soon be revived despite its recent termination last June.

“We have already indicated to China our openness to new talks on oil and gas exploration,” Manalo told lawmakers at the House of Representatives, during a hearing on the Department of Foreign Affairs’ proposed budget for 2023. 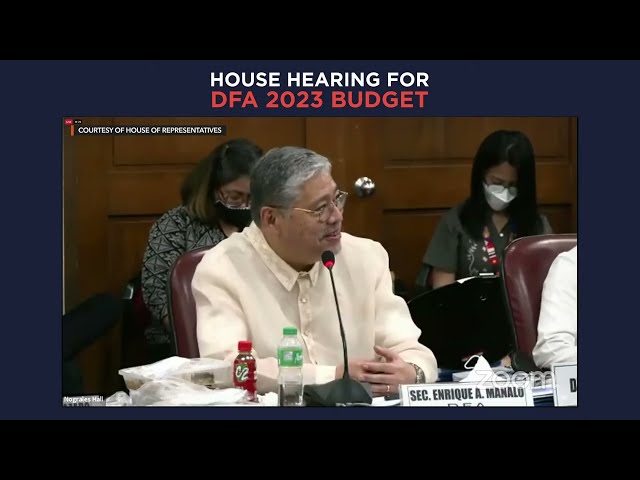 The development comes after Chinese official Liu Jianchao, Beijing’s former envoy to the Philippines and current head of the Communist Party of China’s diplomatic arm, held a recent visit to Manila, where he expressed hope that both countries could restart talks and “demonstrate some kind of flexibility” on the issue.

The sentiments are a reversal from just a few months ago, when the Philippines said discussions reached an impasse owing to issues of sovereignty and constitutional constraints. Former foreign secretary Teodoro Locsin Jr, who had drafted the memorandum of understanding (MOU) on oil and gas talks with China, said after nearly four years of negotiations, “we got as far as it is constitutionally possible to go.”

Several Southeast Asia and South China Sea watchers had held out hope the Philippines and China could reach a potential agreement, saying it could serve as a template for cooperation on the use of natural resources in the volatile waterway. At its best, the deal was even envisioned to be a “solution” to the South China Sea dispute. It never materialized.

Should new talks open, what progress could be made this time around?

While negations with China have yet to restart, hard limits already exist for the Philippines. For one, any agreement will need to fall in line with the Philippine Constitution which requires the state to protect and reserve the country’s marine wealth in its exclusive economic zone “exclusively to Filipino citizens.”

Manalo acknowledged this much, stressing to lawmakers several times that any agreement entered into with China, or any country, to exploit resources in Philippine water will need to abide by the Constitution.

“As far as I am concerned and the DFA is concerned, we will not lend our agreement to any contract or any paper or memorandum of understanding on oil exploration which is not consistent with the provisions of the Philippine Constitution,” he pledged.

A main issue raised in earlier talks, however, was the question of which laws would be applied for the deal to push through.

For the Philippines, joint exploration with foreign companies is only possible through the country’s service contract system, where parties acknowledge that oil and gas found belong to the Philippines. Income sharing arrangements under the scheme likewise see the Philippine government receive 60% of net proceeds as owner of the resources, while service contractors are paid the remaining 40% for services rendered, as well as capital and technology provided to extract oil and gas.

“There was a provision clearly stating that any activity entered into between a Chinese company…will be subject to the conditions stated in the service contract system,” Manalo said. But the proposed set up – which China initially agreed to when it signed the MOU – later ended up unacceptable to Beijing.

Manalo disclosed to lawmakers that rather than a 60-40% sharing agreement, China wanted to push for a 50-50% or 51-49% division. Aside from this, China had also sought to attach conditions that were in accordance with their domestic laws, but were unacceptable to the Philippines, Manalo said.

“So those negotiations ended, and no agreement was reached, and as of now, nothing has happened,” Manalo said in a mix of English and Filipino.

Despite this, a looming energy crisis compounded by rising fuel costs are among factors that have prompted the Philippines to entertain a new round of talks with China. “We realize that especially now, with the energy crunch and what is happening around the world, we really have to develop our resources,” Manalo said.

The Philippines, which relies overwhelmingly on fuel imports, has struggled to find foreign partners to help exploit its offshore energy reserves due to China’s overlapping territorial claims. Still, Manalo hoped that China “will come back with an open mind” should new talks push through.

In finding ways to tap unexploited resources in the country’s waters, experts earlier urged the Philippines to consider working with other countries now that scrapped talks with China have provided the Marcos administration with a “clean slate” and lessons it should learn from when dealing with the Asian giant.

Years of talks with China, they pointed out, fenced out other countries from teaming up with the Philippines to explore resources in an area Beijing claims for itself. “That’s the lesson from these talks,” UP Institute for Maritime Affairs and Law of the Sea director Jay Batongbacal earlier told Rappler.

One logical next step, then, would be to open talks with other interested parties aside from China. Past talks have shown, at the very least, a “lack of a sufficient common ground for the two countries to agree on basic principles and mutually-acceptable foundations for joint development,” Batongbacal added.

In a statement, former Philippine foreign secretary Albert del Rosario questioned whether a new round of talks with China would be productive. Del Rosario underscored that under both international law and the Constitution, Filipinos have “every right” to oil and gas resources in the West Philippine Sea.

The former top diplomat warned that any option where the Filipinos’ rights under the 2016 arbitral award and Philippine laws would be weakened “would be treason in the highest order.”

DFA Spokesperson Tess Daza said Philippine and Chinese officials have not gone beyond initial discussions and “there have been no working level talks” at the moment.

The dispute with China has long put a damper on the Philippines’ plans to develop offshore oil and gas resources it needs to meet domestic demand.

President Ferdinand Marcos Jr. earlier vowed he would not preside over any process “that will abandon even one square inch of territory of the Republic of the Philippines to any foreign power.” – Rappler.com